Coldplay's much-anticipated fifth album is nearing completion, with a their new tracks ''developing a recognisable form''. 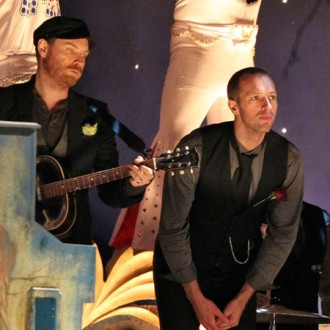 The ‘Viva La Vida’ group – comprising Chris Martin, Guy Berryman, Will Champion and Jonny Buckland – are presently working on their long-awaited fifth album in London and a source close to them says the tracks are now taking shape.

The band’s Roadie #42 blog explained: “Back in the studio, the songs are now very much pushing their heads above the soil and straining towards the light.

“I suspect the band has had a reasonable idea all along of how things will feel when they’re finished.

“There’s been much chiselling and smoothing and now things are really developing a recognisable form and an emotional resonance.”

The recording sessions – overseen by producers Brian Eno and Markus Dravs – are even at the stage where the group are recording vocals, with the blog adding: “There’s no better aural equivalent of the bursting growth of spring than the laying on of backing vocals.

“The fellas are gathered around the mic for much of the time. It’s a tremendous thing to get close up to.

“When the guys are belting it out with the track on headphones, all that can be heard in the room is the blast of harmonies. It’s huge, powerful and yet completely unaided by technology, just a pure, organic human bloom.”

The album is yet to have a release date confirmed.