Celebs Pay Tribute to the Queen of Soul Aretha Franklin 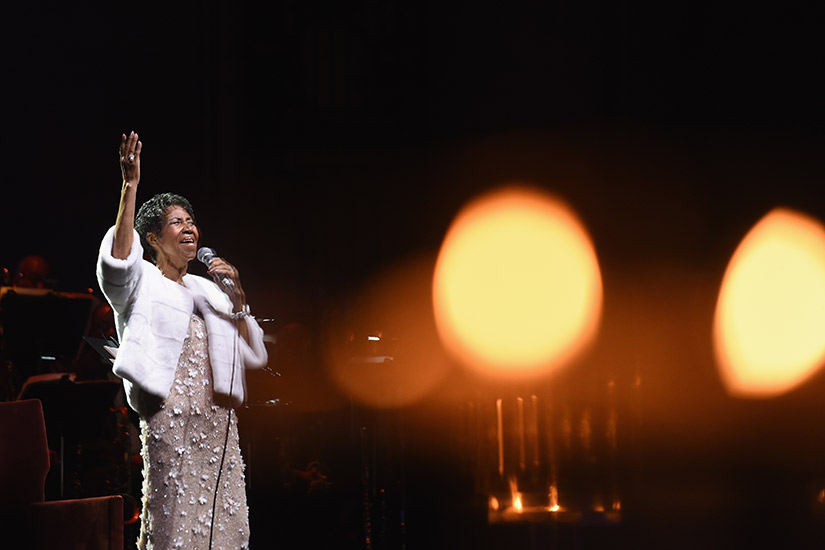 Aretha Franklin, the legendary musician known as the Queen of Soul, has died at age 76.

Franklin died this morning in her Detroit home from pancreatic cancer, her publicist confirmed to the Associated Press. The AP also reported earlier this week that the singer was “seriously ill.”

“In one of the darkest moments of our lives, we are not able to find the appropriate words to express the pain in our heart,” Franklin’s family said in a statement to the AP. “We have lost the matriarch and rock of our family. The love she had for her children, grandchildren, nieces, nephews, and cousins knew no bounds.”

Franklin’s discography includes iconic hits like “Respect,” “I Say A Little Prayer,” “(You Make Me Feel Like) A Natural Woman” and “Chain of Fools.” She was nominated for 44 Grammy Awards and won 18. She was the first woman inducted into the Rock & Roll Hall of Fame. She was also a civil-rights activist.

Fans immediately took to social media to mourn the beloved singer. Here are some tributes shared by celebs.

I can’t remember a day of my life without Aretha Franklin’s voice and music filling up my heart with so much joy and sadness. Absolutely heartbroken she’s gone, what a woman. Thank you for everything, the melodies and the movements ?

This photo was taken in 2012 when Aretha & I performed at a tribute celebration for our friend Marvin Hamlisch. It’s difficult to conceive of a world without her. Not only was she a uniquely brilliant singer,but her commitment to civil rights made an indelible impact on the world pic.twitter.com/Px9zVB90MM

“Looking out on the morning rain
I used to feel so uninspired
And when I knew
I had to face another day
Lord, it made me feel so tired
Before the day I met you
Life was so unkind
But you’re the key to
My peace of mind.”
Her voice/swagger was peerless.
Thank you, #ArethaFranklin pic.twitter.com/5gp0OP10Jf

The world won’t be the same without you in it.
You will always have our utmost respect. #RipArethaFranklin pic.twitter.com/0DMI3PZfjI

Remember when she stepped in last minute for Pavarotti at the Grammys and just shook us all to our core and made us question the universe by singing Nessun Dorma? #RipArethaFranklin https://t.co/Fg5tbxpl9R

Lucky enough to have seen Aretha live exactly once, and this was it.
Thank you for the music, we will be listening to you forever https://t.co/aMHIBFaTAs

My all-time favorite Aretha Franklin song. A gifted singer and musician. May she forever rest. https://t.co/dCsz9MwZs4

One of the highlights of my career was singing with #ArethaFranklin at The Tony Awards. It was an out of body experience for me. One of greatest singers of all time. You will be missed by all. https://t.co/L8dIIhyR9Y

We Will Always Love You Aretha We Will Always Speak Your Name And Give RESPECT. ~Lish and Debbie ?? #arethafranklin pic.twitter.com/kUFoqoMxiA

An unbelievable woman and voice. It was an honor to meet and perform with the Queen of Soul. RIP Aretha Franklin ❤️?https://t.co/BQBtdPuoZO

Aretha Franklin was the only thing I wanted to listen to in the car growing up. I always asked my mom to put her on. Rest In Peace, Queen if soul. An irreplaceable legend!

The moment I wake up, before I put on my make up, I say a little prayer for you

The loss of @ArethaFranklin is a blow for everybody who loves real music: Music from the heart, the soul and the Church. Her voice was unique, her piano playing underrated – she was one of my favourite pianists. pic.twitter.com/ug5oZYywAz

Aretha was such a timeless inspiration to me and so many others, the ultimate queen, thank you for the gift of your voice, music and unshakeable soul ?? pic.twitter.com/me3FXBY4WZ

Hearing the news of her passing has left me in tears but I’m grateful to God that I got to share this smile with her. Thank you Aretha Franklin for leaving such an incredible legacy for generations among generations to stand on. May you Rest In Peace. ?? pic.twitter.com/S9c9po1z3j

The Queen of Soul has left this earth to sit on her throne in heaven. How blessed we were to hear the best that God had to offer in her voice. RESPECT!
?: Mark Seliger pic.twitter.com/v9OxtyrZ74

Praying for the Queen of Soul ?? #ArethaFranklin pic.twitter.com/5cfNPrQrq3

So sad to hear about #ArethaFranklin passing. An extraordinary artist who used her talent to lift up others around her. Rest In Peace to the #QueenofSoul. pic.twitter.com/tAo6CDnBYJ