Bowling for Soup think it is a ''nice surprise'' when their pop-punk songs work just as well when they are stripped back for acoustic performance. 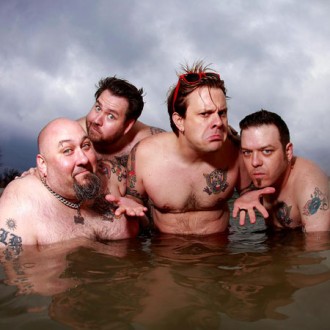 Bowling for Soup are surprised some of their songs work acoustically.

The ‘Punk Rock 101’ rockers are famed for their loud and fast pop-punk sound, but are always astonished how good their tracks sound when stripped back to just voice and guitar.

Vocalist Jaret Reddick – who has recently completed an acoustic tour of the UK with the band – told BANG Showbiz: “It’s always a nice surprise when you’re like, ‘That song would never work,’ then, weirdly, it does.

“Then, it always kind of comes back to that same thing, I mean they’re all written on acoustic guitar, and one of the first rules I learned – and I can’t even remember who taught it to me – but if a song sounds good on acoustic guitar, it’s a good song.” The ‘1985’ hitmakers – which also include Chris Burney, Erik Chandler and Gary Wiseman – have been together 18 years in which time they have amassed a formidable back catalogue, but for anyone isn’t familiar with their back catalogue, Jaret had a few recommendations as to where to start.

He said: “We’ve been together a long time, but for someone who’s just discovering us, they should run the spectrum of our career, so if we go for the big songs ‘Girl All The Bad Guys Want’, ‘1985’, ‘High School Never Ends’ – I mean in that, there’s seven years of stuff right there!”

Bowling for Soup’s 11th album ‘Fishin’ For Woos’ is out now.