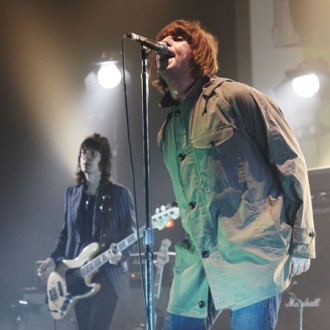 The group were one of three acts to pay homage to the Liverpool pop legends over the evening, joining Paul Weller – who played a version of ‘Come Together’ with Stereophonics singer Kelly Jones – and The Coral, who covered ‘Ticket to Ride’.

The show had been organised by Beady Eye frontman Liam Gallagher in the wake of the devastating earthquake and tsunami which struck Japan last month, affecting hundreds of thousands of people. Some 5,000 people attended the show at London’s Brixton Academy, raising over £150,000 for the British Red Cross Japan relief fund.

Speaking ahead of the show, Liam told The Independent newspaper: “It’s not just because we’re popular in Japan. As a human, you just think it’s heavy. We’ve always had close ties with Japan and great affection for our fans out there. Our hope is that this benefit concert can help the people of Japan.”

The artists’ sets stuck mainly to their biggest hits, with Paul Weller playing Jam classics including ‘Eton Rifles’ and ‘Start’ as well as solo tracks including ‘Changing Man’.

Primal Scream played ‘Loaded’ and ‘Movin’ On Up’ from their Screamadelica album, while Richard Ashcroft played Verve tracks ‘Sonnet’ and ‘Lucky Man’.

Beady Eye’s set was comprised of material from their debut album ‘Different Gear, Still Speeding’ with Liam introducing the track ‘Kill For A Dream’ by saying: “This one is for all the people in Japan.”

The band also played hits including ‘The Roller’ and ‘Bring the Light’, while Liam pulled his hood up over his face before last two tracks, ‘Sons Of The Stage’ and ‘Across The Universe’.