Adele swept the Grammy awards last night (12.02.12), taking home six trophies, including the coveted Album of the Year for '21'. 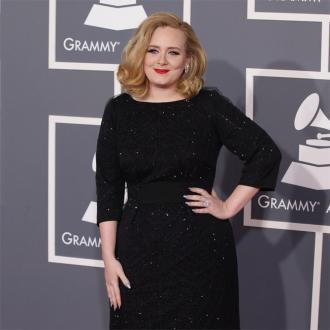 Adele swept the Grammy awards last night (12.02.12), taking home six trophies.
The British singer was the big winner at the US event – held in Los Angeles – taking home trophies for Record of the Year, Short Form Music Video and Song of the Year for her single ‘Rolling in the Deep’, Pop Solo Performance for ‘Someone Like You’, and both Pop Vocal Album and the coveted Album of the Year for her second record, ’21’.
Picking up the last award, she said: ”I just first want to say ‘Mum, girl did good.’
”This record is inspired by something that is really normal and everyone’s been through it, just a rubbish relationship, and it’s gone on to do things I can’t tell you how I feel about it, it’s been the most life-changing year.”
Adele, 23, also thanked doctors who had operated on her vocal cords last year in order to save her voice, and gave her first performance since then, singing ‘Rolling in the Deep’, which received a standing ovation.
The show also included tributes to Whitney Houston – who was tragically found dead at the Beverly Hilton hotel on Saturday (11.02.12) – with Jennifer Hudson giving a moving rendition of one of her biggest hits, ‘I Will Always Love You’.
Host LL Cool J led the crowd in a prayer, and said: ”We were up all night, and we just wanted to figure out and show Whitney Houston, the love, the respect she deserves.”
Elsewhere at the awards, Foo Fighters picked up five trophies, including Best Rock Performance for their track ‘Walk’.
Singer Dave Grohl said: ”Rather than go to the best studio, We made this one in my garage with some microphones and a tape machine.
”It shows that the human element of making music is what’s most important.”
Kanye West had the most nominations ahead of the awards with seven, and took home four, including Best Rap Album for ‘My Beautiful Dark Twisted Fantasy’, and both Rap Song and Rap/Sung Collaboration for his single ‘All of the Lights’.
Dance music prodcuer Skrillex took home two awards, Dance/Electronica Album for his second album ‘Scary Monsters and Nice Sprites’, and Dance Recording for its title track.