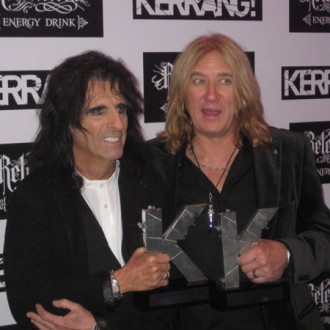 Speaking at the ceremony, Alice told BANG Showbiz: “It seems to be awards year for me – I seem to keep getting them! I hope that doesn’t mean it’s the end – maybe they know something I don’t know – maybe they’ve got my biopsy or something!”

Collecting the Best International Band award for the second year running, Jared thanked all the 30 Seconds to Mars fans for their support.

Referring to the raucous nature of the event, he joked: “We’re starting an Alcoholics Anonymous table over here if anyone wants to come over!

“But seriously, this is a chance for us to say thank you to our amazing family of fans all around the world.

“It’s good that we can bookmark such a crazy journey with an event like this.”

Collecting the award, Def Leppard singer Joe Elliott said: “Thank you for inviting us and proving that there is more than just two s**t football teams from Sheffield.

“We’ve been around longer than the magazine has so that makes us the oldest f**kers in the room. Thanks to anybody that’s been behind this band from day one.

“Other than that we’ve got nothing else to say – you said we’ve had pearls of wisdom… Have you heard our lyrics?”

6. Best Album: Bring Me the Horizon ‘There Is A Hell, Believe Me I’ve Seen It. There Is A Heaven, Let’s Keep It A Secret’

7. Best British Band: You Me at Six