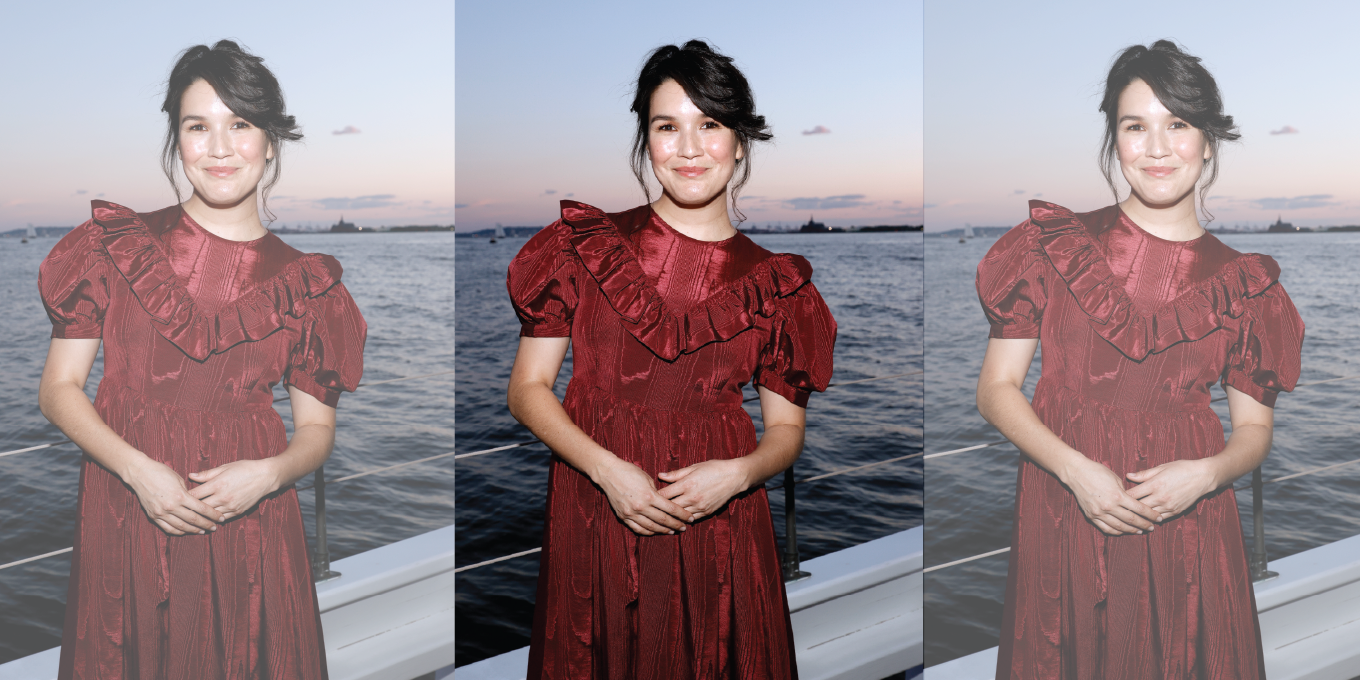 When I hop on a Zoom call with actress Zoë Chao, she’s all smiles, clad in a black leather top and a slicked back ponytail. Her energy is infectious, and is on the same wavelength as her most recent role in The Afterparty, one of AppleTV+’s newest genrebending series, about a high school reunion that quickly takes a turn when a former classmate is murdered and everyone is a suspect. It’s your classic whodunit, but it’s mixed with an admirable level of comedy thanks to its stellar cast—Tiffany Haddish, Ilana Glazer and Dave Franco to name a few. Chao, who’s known for her more serious roles in Love Life and Modern Love, plays Zoe (yes, they share the same name) an aspiring artist who is going through a heaping amount of life changes all at once. “She’s ready to try something she’s never done before,” Chao says of her character. “She has no idea where the night could lead and that’s exciting for her.” We chatted with Chao about her new role, working on set of a comedy series and her favourite murder mysteries.

What drew you to The Afterparty?

I got this script from this incredible casting director, Jeanne McCarthy, who I owe my career to. If you know that Jeanne McCarthy is casting a project, you know that it is going to involve great scripts, great writing and good human beings. Then I found out it was [Phil] Lord and [Christopher] Miller and I’m very familiar with their body of work. They are just really impressive storytellers. Then I learned about the premise and got to read the pilot and was just so excited to throw my hat into the ring. [I was] really over the moon when I found out I got to be a part of this.

Do you have any favourite murder mystery books or movies?

Yes, let’s go! No one has really asked that question. I grew up reading Nancy Drew. I remember I read my first Agatha Christie book when I was 12. Most recently, I just read two Raymond Chandler books, which made me sort of fall in love with [Los Angeles.] I work a lot in LA, and I needed to be charmed in some way, because that, to me, can be challenging. It’s so cool to read about Los Angeles in the 1930s. Those are books that I love. But then, movies, I love whodunits. You’ve got comedies like Arsenic and Old Lace with Cary Grant—that’s an amazing whodunit. I recently watched Midnight Lace, which is a [movie with] Doris Day and Rex Harrison—she’s so good in it, she’s really serving the drama. Usual Suspects [and] Scream are some other ones that I just love. Oh, Gosford Park, Clute. These are all very different kinds of murder mysteries, but I love it all. I [also] watch a lot of Scandinavian detective series—I don’t know why, but I love them so much. But I am [also] one of the many who listen to murder mystery podcasts.

So this project is right up your alley.

How was working on The Afterparty different from other projects that you’ve worked on in the past?

I’ve never worked on anything quite like this. Each episode is told from a different character’s perspective in a genre that reflects their personality and perspective. It was like doing eight little movies, which was so fun from a performance standpoint, and also really challenging. Also, to revisit the same evening in question for five months straight was a challenge that I don’t know if I was totally prepared for. But thankfully, we had Chris Miller at the helm. I can’t imagine anyone else being able to pull this off because it’s very scientific and mathematical. But he also managed to protect the environment and set and make sure that we had a lot of fun while we did it.

What was it like working with the cast throughout the five months?

[Our connection] was pretty immediate. I went home the first night and turned to my partner and was like, I think I made a whole new family. For many of us, it was the first project that we were returning to, after seven months of being off work, and it was a really scary time for this country and for the world. I think we all felt so lucky that we had work [and] AppleTV+ had figured out a way to make sure we were safe while working. But then you look at who the cast is, and you realize it’s like the titans of comedy. They also happen to be as kind as they are talented. It was such a joyful experience every day coming to work. I think we really clung to each other during those five months.

How would you describe your character?

We meet Zoe at a crossroads—she’s navigating a big transition. She’s recently estranged from her high school sweetheart, Brett. So newly single [and] also a single mom. She’s in a job that she didn’t envision for herself as a school administrator, in the high school they all attended 15 years prior. This transition and time of reflection is timed perfectly with this high school reunion. That is naturally an event that sort of makes you reflect on memories and origin stories and is filled with nostalgia. I think she comes to the reunion really excited to be on her own. She’s itching to get closer to that person she knew back in school. She’s felt really removed from the things that make her [excited.] She hasn’t been practising her art [even though] she’s a visual artist. She’s done with playing it safe.

How do you feel like you relate to Zoe?

Beyond sharing a name, there were wild overlaps. I studied art pretty seriously in high school. I did a three year studio art program that my mom actually taught at my school. While I didn’t end up teaching at my school, my mom taught there and my parents are both visual artists. My sister’s a visual artist. My dad actually ran the glass department at [Rhode Island School of Design], which is where Zoe goes to school. In the show, Brett, her ex goes to Brown to play lacrosse, and I actually went to Brown in real life. I felt a lot of kinship with Zoe. I also relate to her sort of being someone who is not sure who she is. I feel like I’m always like, Who are you girl? You know, real Zoe. Like, who are you? That’s another way that I felt aligned with her.

What was the most fun part of playing Zoe? She has a lot of sides to her.

I didn’t do a ton of voice over work prior to this. It was really exciting to get into the booth and let it rip. There’s something liberating about not having a camera on you. Chris Miller and Phil Lord are geniuses, so I felt in very good hands while navigating [Zoe’s] episode.

How do you think Zoe grows as a character by the end of the season?

Whatever anyone had planned for the evening is totally disrupted by this terrifying murder. You’re stuck in a room with people you knew a very long time ago, [who] we don’t really know anymore. You’re at the mercy of these detectives who don’t really seem to know what they’re doing, so it’s a really disorienting situation to be in. The doubt [Zoe] had about herself going into this reunion, she proves to herself that she’s got her shit together way more than she thinks she does. I get the sense that Zoe is like I did this on my own. I can do the next step on my own.

This interview has been condensed and edited for clarity.

The first three episodes of The Afterparty are available to stream on AppleTV+ now.

Read more:
Mackenzie Davis’ Emotional Ride
Kaia Gerber Is Making a Name for Herself
Chances Are You’ve Seen Patti Harrison Before and She’s Made You Laugh—Hard