Meet the Canadian Star of The Hate U Give

Remember the name Lamar Johnson—he’s about to be everywhere. 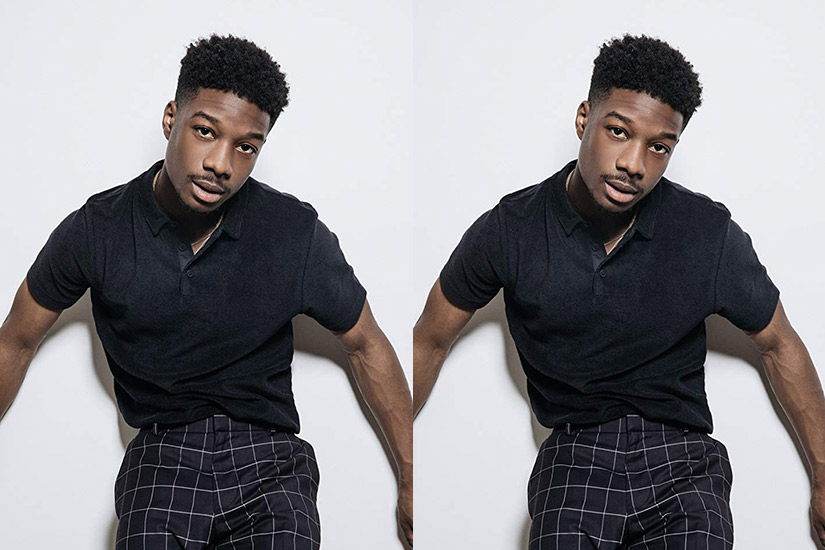 The Hate U Give has everything you could possibly want in a buzzy fall movie release: an emotional, compelling story; well-written source material, courtesy of Angie Thomas’ popular YA debut; a star-studded cast, featuring Amandla Stenberg, Issa Rae and Riverdale’s KJ Apa; and a Canadian connection: The film also features very proud Torontonian Lamar Johnson. “I’m always representing Canada—I definitely want people to know I’m from here,” he tells when we meet up just before the Toronto International Film Festival, where he was named one of this year’s Rising Stars. “I want that to be a part of who I am, it’s a part of my identity. I wouldn’t have it any other way.”

In The Hate U Give, out everywhere Friday, Johnson, 24, plays Seven Carter, the protective and caring older brother to Stenberg’s Starr, two teens who are constantly switching between the world of their privileged, mostly white prep school and their poor, mostly black neighbourhood. When Starr witnesses the fatal shooting of her childhood best friend by a white police officer, Seven and the rest of the Carter family are a crucial support system as Starr struggles to figure out what to do next.

Johnson was back in town (he’s now based in L.A.) in September for TIFF, where The Hate U Give had its world premiere, but it wasn’t his first time at the fest. The actor-dancer got his break on Canadian teen series The Next Step before making his film debut alongside Halle Berry and Daniel Craig in the drama Kings, which premiered at TIFF last year. And he’s not stopping anytime soon: next year, he’ll join the impressive ensemble cast of the latest X-Men flick, Dark Phoenix.

What made you want to do The Hate U Give—had you read the book already?

I hadn’t; I actually read the script before I read the book and I just fell in love with the story so I had to read the book, and both are so amazing. I first read it through Seven’s eyes, because I knew that’s what I was going in the room for, but Starr’s journey, the family [dynamic], every character is just so well built. That’s what really drew me to the script. I just knew I had to be part of it once I finished reading it.

How much did you and the cast rely on the book when filming?

This was actually a conversation we had with our director [George Tillman Jr., The Longest Ride]. Essentially, the book is the bible of the film and we definitely referred to it, but he didn’t want us to depend on it. He said he just wanted us to be present in the moment and trust our instincts, which I enjoyed. George is incredible, he’s an actor’s director—he’s very collaborative and willing to play and try things.

Is there an example of that sticks out in your memory?

There was one time when he sat us around the dinner table [in the Carter home]. Amandla, Regina [Hall, who plays Seven’s stepmom Lisa] and Russell [Hornsby, who plays dad Mav] were all there. [George] said, “I want you to each tell each person, in character, why you love them.” It was an amazing moment, we got very emotional. We were in really good hands with George, everyone at the table was so open and invested in the story. I just knew from that moment it was going to be special.

It’s such a timely movie. Did that make you feel pressure to get it right?

No, I’m not nervous. I actually feel that it’s very important for me to tell this story. I think people are going to leave the movie and have a conversation about it and talk about what makes it so relevant. The great thing about this story is regardless of all the negative things and the weight of the film, the Carter family is there for Starr. They move through love, it’s never about hate. And if more people can do that, it can be a bit of a remedy for what’s going on in our world right now.

You’re in the new X-Men movie next year. Can you tell me anything about that?

I can’t tell you too much, but I am a character who is a student at Charles Xavier’s School for Gifted Youngsters. I grew up watching X-Men, so to be a part of that franchise is like my childhood dream come true. I also worked with Halle Berry [who stars as Storm in the franchise] on Kings, so when I booked it we had dinner and I told her. She was like, “That’s crazy!” We shared that together and it was really nice.

Now that you’re back in your hometown for a bit, what are some of your favourite spots that you’ll have to visit while you’re here?

I love lowkey spots. I was actually at a place last night, a hole-in-the-wall Japanese spot called Hanmoto. And you can never go wrong at the Thompson Diner. Their chicken and waffles are really good.