The creator of the new Netflix show talks about lingering on the little moments and creating lived-in experiences. 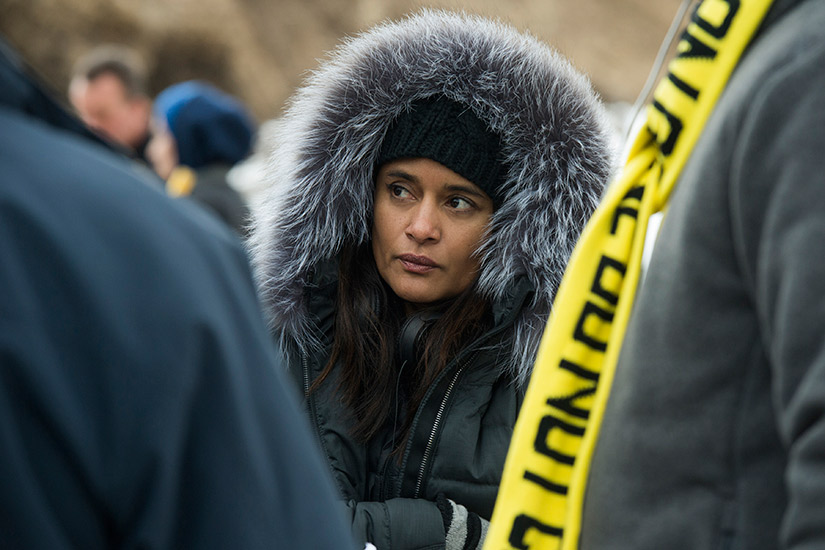 If you’re familiar with Veena Sud’s work — you may have heard of a little show called The Killing — you know that the Toronto-born writer-director-producer does not shy away from the heaviest of subject matter.

Her newest series, Seven Seconds, a Nordic-noiresque crime thriller that just dropped on Netflix, is no exception. The 10-episode first season follows three different perspectives in the aftermath of a white police officer and his co-workers covering up the fact that he ran over a black child. We spoke with Sud about the inspiration behind and the making of the real-life-inspired show, which stars Regina King.

How did you come to this story after The Killing?

I came up with the idea in 2015 when I had finished The Killing and I was looking for another project to do. That was post the Ferguson uprising in 2015, Freddie Gray had just been killed, and just turning on the television, it felt like every night another black man or child had been killed. Talking about it, I was just appalled and horrified and I said, “This is a story I would like to tell, but I don’t want to hold anything back or pull any punches. It’s not going to be an easy story or a very happy story. If I can tell it that way, then I would like to.” And they said yes.

Seven Seconds has so many different angles and characters involved. What was most challenging for you when trying to put it all into one story?

One of the biggest challenges was just following so many stories and really being as precise as we could. It felt a lot like creating a mosaic. You have an idea of what you want to do and as you start gluing in the pieces of the stone, you’re always taking steps back and trying to imagine if it fits into the bigger picture.

There must have been a lot for you to juggle as both an executive producer and the showrunner. What were your days on set like?

At the beginning, it’s very, very, very nuts and bolts. For me, as a creator, the lived-in aspect of a person’s home or work environment is so important. I would do things as microscopic as write notes on Fish’s [a detective investigating the crime] desk about a dog appointment and just put the sticky somewhere. I really notice when a set doesn’t look like people have actually sat there. It really makes something feel like real life.

Because this show is so based in real-world events, do you hope it accomplishes something?

What draws me to the work is an attempt to show a truth and an experience of a moment in a life. I hope that we’ll walk away from this series and others like it with a desperate necessity for change in our hearts, that we were all so moved by what we’ve seen over the course of 10 episodes that the necessity for change becomes even more clear. Also the recognition that we’re all part of this tragedy. It’s constant human-rights violations that are happening on our soil, and no one can be on the sidelines anymore.

You really take your time with the pacing in the show. Is that something you were really deliberate about?

Lingering on life is kind of my thing. I like to take my time and then let the spaces between the words and after the words live and breathe. Dramatically, that’s where a lot of subtext is. I think there’s a lot of value in not cutting away.