In the Heights Star Melissa Berrera on Landing the Part, the Latinx Community and the Timing of This Release

Lin-Manuel Miranda’s musical motion picture In the Heights is the cinematic antidote everyone needs right now. We spoke with Melissa Barrera, one of the film’s breakout stars. 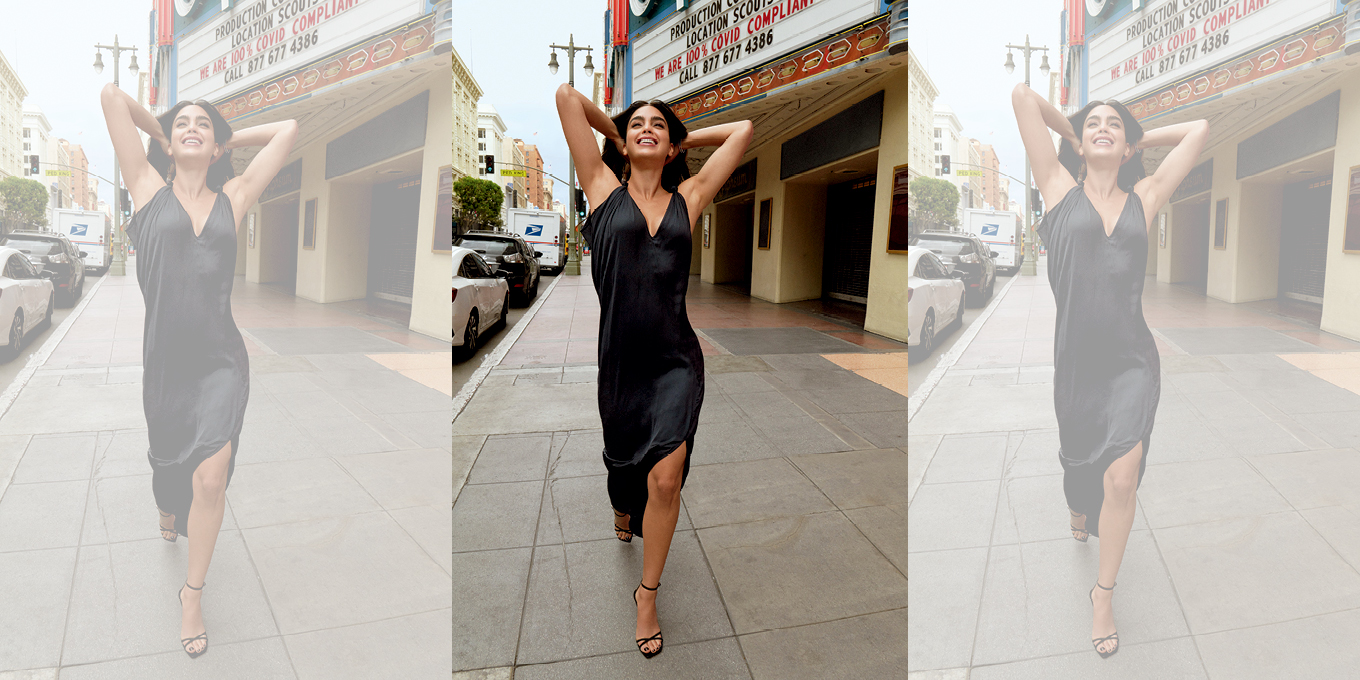 Here’s the truth: I don’t like musicals. Even as a child, I was never drawn to the genre. I hated The Sound of Music. (I said it!) I’ve always avoided anything with singing—I never even saw La La Land, although Ryan Gosling is my “hall pass” celebrity. Come to think of it, so is Emma Stone. The thing is, I love music, dancing, film and theatre—just not a combination of all four. So when I heard buzz about Lin-Manuel Miranda’s Broadway musical production In the Heights coming to the big screen, I didn’t think much of it. Then, one cold, dark, wintry pandemic night, I had the chance to preview it, and with a curfew and lockdown in effect, I figured I had nothing to lose.

Turns out I was mesmerized from the get-go. While the movie transported me to a three-day-long heat wave on the vibrant streets of the Dominican-American neighbourhood of Washington Heights in New York City, I did not get up once to pee, get a snack or even look at my phone. Miranda’s music was punchy and fun, the choreography and dancing were sensational, the story was touching and heartwarming and I was left with a sense of hope and happiness. I needed this.

And I’m not alone—this musical is creating a lot of converts. “I love hearing people say ‘I’m not a musical-theatre person or a musical-movie person, but I loved it,’” gushes Mexican actor Melissa Barrera, who plays lead character Vanessa, when we speak over Zoom ahead of the film’s release on June 11 (both in theatres and on HBO Max). “When you already love musicals, you’re an easy audience, but what we want is for everyone to watch this movie and like it.”

American playwright Quiara Alegría Hudes wrote the book for Miranda’s musical, which had its Broadway debut in 2008 and won four Tony Awards and one Grammy that year. The film version—produced by Miranda, written by Hudes and directed by Crazy Rich Asians’ Jon M. Chu—has been a long time coming; it was delayed early on due to a cancelled deal with the Weinstein Company before being picked up by Warner Bros., and then its release was held up because of the pandemic.

But I’m here to tell you that it’s worth the wait. “I’m so happy there’s a musical-movie resurgence happening because that’s what I love doing the most, so if I can make more musical movies, please sign me up,” says Barrera. “It was such a great experience and work environment because we were all literally a team. Every song-and-dance number was a lot of hard work, but that’s how we made the magic that we did.”

One of the most striking things about In the Heights is the cast of heavy hitters—many of whom are Latinx—including Barrera, who plays opposite Anthony Ramos from Hamilton; Cory Hawkins from Straight Outta Compton; singer-songwriter Leslie Grace; Stephanie Beatriz from Brooklyn Nine-Nine; Dascha Polanco from Orange Is the New Black; Olga Merediz, who reprises her Broadway role as Abuela Claudia; Jimmy Smits; Marc Antony; and Miranda himself. The triple-threat ensemble is a seamless crew—like the cool kids at music camp—but newcomer Barrera steals the spotlight as Ramos’ love interest, a local girl who works in a beauty salon and dreams of moving out of the neighbourhood.

“I’ve been waiting for an opportunity like this—not just for me but for what this movie will represent for latinx people in the industry.”

“Theatre has always been my first love,” says Barrera. “I started doing theatre and musical theatre in middle school, and I fell in love with not only being onstage and telling a story but also feeding off the audience’s energy—that interchange is magical.”

Barrera grew up in Monterrey, Nuevo León, Mexico. She became a telenovela star before making the leap to the big screen in her native country all while staying true to her love of theatre with major roles in three long-running Mexico City productions. But it was when she moved to Los Angeles and was cast as a lead in Vida, a show on the Starz network about two sisters who are reunited after their mother’s death, that she began to turn Hollywood heads.

“In January 2019, Lin FaceTimed me and told me that I got the part,” says Barrera. “I immediately started weeping. When I hung up, I just sat there, floating. It didn’t feel real. I felt like I had been working toward this and manifesting this moment for 10-plus years of my life, and then it finally happened and it was the most fulfilling feeling I’ve ever experienced.”

The film is centred on Ramos’ character, Usnavi, a young bodega owner who is saving every penny so that he can create a better life for himself back home in Puerto Rico. It was shot on location in Washington Heights; the cast also rehearsed there for 10 weeks, which means they spent a total of five months together. “We’re a family now,” says Barrera. “This was a very special once-in-a- lifetime experience for all of us, and we’re very aware of that.”

Not only is this a visually stunning production—with scenes like a synchronized singing-dancing-swimming number in an outdoor pool that will have you completely enthralled—but it also contains a powerful message about the adversity and challenges faced by the Latinx community as well as their hopes and dreams for something more. “I’ve been waiting for an opportunity like this—not just for me but for what this movie will represent for Latinx people in the industry,” says Barrera. “I think it will open a lot of doors, and I’m so excited for us to have a moment right now—we deserve to have our stories told on the big screen and for the world to see them.”

With its original June 2020 release date pushed back, the cast had to wait a whole extra year before they could finally share and celebrate their hard work. But, Barrera tells me, everything has turned out for the best. This film could not have come out at a better time than now, when we all need to be reminded of the vibrancy, beauty and love that exists in the world despite these extremely difficult times.

“We need an escape—we need something positive and joyful that will make us smile and feel good from beginning to end,” says Barrera. “It’s medicine right now; it will be good for people’s souls and hearts.”

Read more:
Legally Blonde 3: Release Date, Spoilers, Cast, Trailer and Plot Lines
Throwback Summer Movies That Feel Like a Mini Vaca
Meet Every Character From the Gossip Girl Reboot and Their Doppelgänger From the Original