Glow Star Ellen Wong on the Collective Power of Women 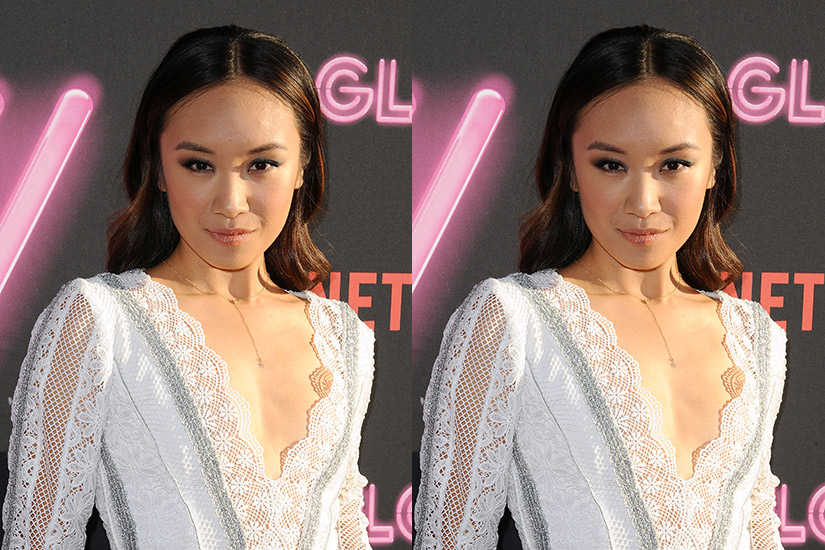 There’s no place like home for GLOW’s Ellen Wong. The Scarborough native, who is based in L.A., but is in Toronto promoting the second season of the hit Netflix show, the 1980s-set TV wrestling show dramedy (which co-stars Alison Brie and Betty Gilpin) and tells us the city “ is just so welcoming and the best.”

The fact that it’s a gorgeous summer day—i.e. not full blown Canadian winter—may have something to do with it. “There’s a special energy in our city when it’s summer because we have to go through all the four seasons,” she adds. “Everybody’s out and about, and enjoying themselves.”

In GLOW, Wong–who starred in Scott Pilgrim vs. The World and The Carrie Diaries—plays Jenny, a fledgling actress who finds roles rather limited to women, especially women of colour. So, she signs up to star on a low-rent TV wrestling show, the Gorgeous Ladies of Wrestling….and is immediately given the wrestling persona “Fortune Cookie” by the sexist and culturally insensitive director Sam (played by Marc Maron). So many eye rolls, we know. And that, as Wong explains, is kind of the point.

What can we expect from your character in the second season of Glow? The first season ended with our characters finishing shooting the Gorgeous Ladies of Wrestling pilot. We’re about to move out and live together to shoot the first season. It’s really meta. It’s a really exciting season because we’re taking the time to start looking into individual lives. Each woman has such a huge story and I think it’s important to see who these people are and how they present themselves at work and in the ring. We’re playing this huge stereotype in the ring, but outside of the ring, we’re these human beings who are co-existing —or are trying to—and I think that’s going to be the most relatable part of this season.

What’s been the feedback from fans? I’ve had people come up saying that they appreciate that Jenny is Cambodian; they just appreciate that there’s Asian identity on screen. There is so much diversity within the Asian identity so I feel really happy that I’m able to play a character that is Fortune Cookie in the ring—a mash-up of all these Asian stereotypes—and then being Jenny outside of the ring who says, “hey I’m Cambodian.” That in itself immediately makes her a three-dimensional human being who is complex and nuanced and her own whole person.

Part of the commentary of GLOW is that there were no good roles for women in the ‘80s. You’ve been in show biz for almost a decade now. Has anything changed? I feel like now, in 2018, there is a movement helping women come together. It’s changing; it’s shifting. We’re not fully there yet, but I definitely can feel that it’s happening. I was reading a study that the University of Southern California did. In the span of 10 years, from 2007 to 2016, they examined 900 movies and the percentage of women as leads or co-leads in a film or with speaking parts, was only hovering around 30 percent. It never changed in that 10 years. That’s really what we’re dealing wit. Then when you look at women from underrepresented racial or ethnic groups, it’s a totally different story [even worse]. When you see numbers like that, you go, we have some work to do.

The creators of the series (Liz Flahive and Carly Mensch) are women; the cast is practically all women, the costume designer, etc. What does this mean to you? Getting to work with women has been a really empowering experience. When I first started working on the show, I had a bit of discomfort when I was around so many women, then I realized the discomfort was in the newness of the experience because we don’t get to work with women all the time—especially in this industry. We’re a true ensemble and it’s just really incredible. I think if men were making this show, it’d be a totally different show. There’s also such a celebration of the uniqueness and individuality of each woman in personality but also in body types.

There are about a dozen actresses playing GLOW wrestlers. Are you guys all friends now? When we showed up on set together for the second season, it was like no time has passed. Even in the off season, we all live in different cities, but when we’re in LA or in New York or wherever, we’ll make a point to meet up, grab coffee, or  hang out. We also have this WhatsApp group where we’re always checking in and talking to one another. We’ve had our own group chat that’s been going on for two seasons now. But I can’t tell you what we talk about.  [Laughs]

Any plans for today for after you finish all your interviews? I just love the west side downtown and just hanging out in Trinity Bellwoods is a favourite and just walking around. I definitely want to go back to Joso’s that’s one of my favourite restaurants in Toronto.

Thank you for the warm welcome home, Canada! ??Loved chatting with everyone about @glownetflix Season 2. All eps @netflix this Friday June 29! ✨??