Actress Lina El Arabi is about to be everywhere

We spoke to the French actress about happy endings and working with acclaimed Canadian writer-director Kim Nguyen. 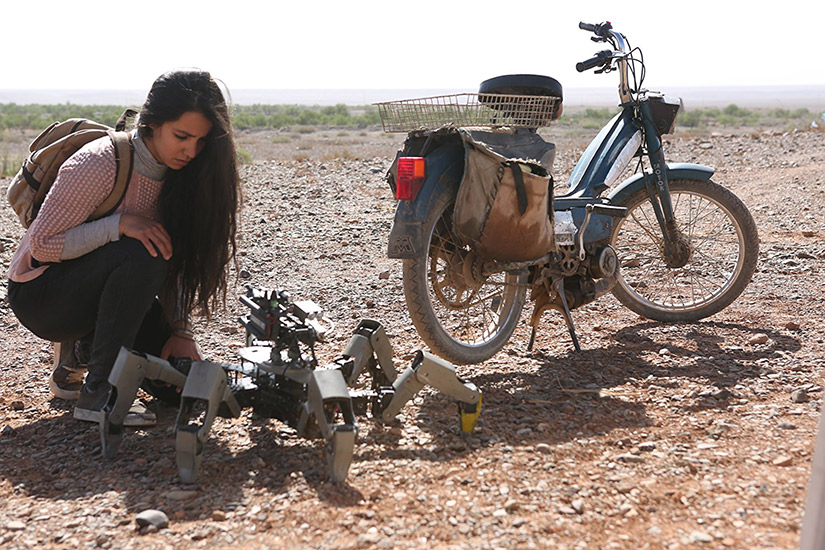 It’s mere hours before Eye on Juliet debuts at TIFF when we catch up with film’s star Lina El Arabi and the 22-year-old still doesn’t know what she’s going to wear. It’s not her thing, the Paris-based actress explains. “I love fashion, but I need to be comfortable, so I try to make a mix of classy and comfortable.”

This is one of two appearances El Arabi has had at TIFF (her film Noces also screened at the fest). In drama-slash-romance Eye on Juliet, which hits Canadian theatres this week, she plays Ayusha, a young Middle Eastern woman who forms a connection with an American drone operator Gordon (Joe Cole). The catch? They can only communicate through translation equipment on the robots. (Gordon can also see her through a video camera.) We spoke to the French actress about happy endings and working with acclaimed Canadian writer-director Kim Nguyen.

Tell me about how you got your part in the movie.

For me, it [seemed] impossible to get this role, because I’m French, and it’s a Canadian movie and it was in Arabic and English. I still do not know why I’m in this movie, but I was surprised.

Do you speak Arabic?

No, actually. I can read it. I can write it. I can understand it, but it’s really complicated for me to speak in Arabic.

What was your experience working with Kim Nguyen?

I love his work. I’ve seen War Witch and I think it’s a beautiful movie. I think he’s one of those directors who loves actors, and it makes me feel more comfortable. I can see in his eyes that he believes in me and that he loves what I do when I’m acting. I think he’s an amazing director and an amazing person, too. He’s really kind, and calm and funny. I feel lucky to be apart of this movie because I wish I could work with him again.

Not to get into spoiler territory, but it seems like the movie is headed for a disaster so the ending is kind of a relief. Did you expect this kind of ending when you were reading the script?

No, because in France we don’t really like when a movie has a happy ending. But in this movie, it’s not just two humans who meet each other; it’s two cultures. She’s Arabic, he’s American, and so this couple is really different. We don’t have the same culture, but we love each other and live in the same world. We need that kind of message now.

You get to ride a motorbike in the movie. Did you know how to ride one before filming?

No, I had a stunt double. But it was weird because she was blonde, and had really white skin and was small. For me, it was important to do it by myself and ride it for real, even if the camera wasn’t shooting my face. It was not easy, but I actually liked it.

Do you drive, or was this your first time on the open road?

It was my first experience. Now I drive a scooter and my parents are worried because in Paris a lot of people are crazy [drivers]. I actually love it. I feel free. And in a city like Paris, it’s easy to move around with a bike.

Is there anything that your character, Ayusha, goes through that you relate to?

I think we are both strong, and we know what we want, and we are free and independent. I really admire her. She has to choose between her family, her village, her country—which she loves—and her freedom. It’s not an easy choice, so I really admire her.