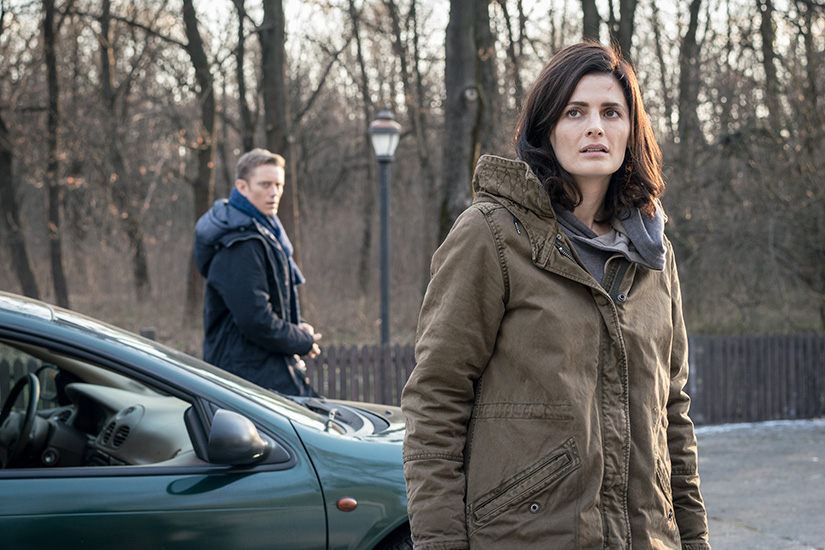 It’s not a spoiler to say that Stana Katic’s new show is all-caps-worthy INTENSE. The Hamilton, Ontario native—who you might know best from her work on Castle—plays an FBI agent who everyone had given up for dead…until she is rescued from a cabin in the woods after six years in captivity. If that weren’t dramatic enough, her character, Emily, says (or rather, claims) she can’t remember anything about the whole ghastly experience. What she is fully cognizant of, however, is the profound shock of coming home to a world that has moved on without her—her husband has remarried, her son has grown up, the Bureau has arrested someone who they thought was her killer.

ELLE Canada: So not only do you play this demanding character, but you’re also executive producing this show. What’s the more stressful hat to wear?

Stana Katic: It’s a psychological thriller, so I would say that keeping the character grounded and relatable was more of an all-encompassing challenge, whereas participating in producing the project was nice because it doesn’t require fully diving in, at least not in the same way.

EC: What did those executive producer duties actually entail?

SK: I’ve held the title of producer in the past but I the feel like this is the first time I was really welcomed to the table. It involved a lot of dialogue about the development of the character and development of the story before and then through filming, and then I was a part of editing the episodes. Now we are looking at the future of the show, and that’s equally as collaborative which is exciting for me.

EC: Was it an odd experience for an actor to be in the editing booth of a project you’re starring in?

SK: I’m not the person who’s like “Yay, I want to see footage of myself!”. It’s not, by any means something I spend my free time doing. There was an initial cringe moment when I realized that was going to be a part of the process. But then I fell into the concept of the overarching story, and taking a look at it and making sure that I was a great partner in telling the story overall with the other collaborators. Once you’re looking at a story from that end, it doesn’t matter if the camera is on me or if it’s on one of my co-stars, as long as every beat of it is challenging the audience to live at the edge of their seat, and it’s constantly engaging them with the characters and the stakes in the story.

EC: This is a pretty dark role. How did you get into that emotional space and still remain a functioning human?

SK:  It’s a tough story to tell, but we all bore that story telling responsibility. Our director and cinematographer made sure that the ambiance and camera angle participated in that conversation; I had really lovely fellow actors from all over the globe that were really invested in telling the best story possible.

EC: But how did you personally carry that weight?

SK:  You know, a cocktail can fix a lot of things.

EC: Tell me about what attracted you to this project…

SK: Emily is an anti-hero survivor. That’s really interesting to play a character that is not completely morally correct in every facet, especially as a woman. It’s multifaceted, it’s layered, it’s complex, and in some ways true to what we really are as human beings. People have dark sides, and they also have beautiful loving lives, and that was interesting to explore as an actor.

EC: You filmed this in Bulgaria. What was that like?

SK: Wow, what a gem! Is it Tahiti? No. It’s got it’s own charm, and it was instrumental in telling the story too. For instance, we were filming at one point in a tunnel and the tunnel was used at one point to store nuclear warheads. We also filmed in a birch forest, and the building next to the forest was a former concentration camp. That history is everywhere, and people wear it on them. There’s also lots of magic, like these beautiful medieval castles that are just unexpected gifts we would get traveling across the countryside.