Listen to the hottest new music this month with our top picks. 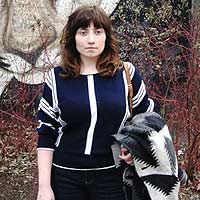 I don’t often toot my own horn, (because it’s a super weird thing to do) but I have to have a bit of a honk for this one. I attended a Noah and The Whale show in Toronto, a few weeks back and was delighted to discover opening act Anni Rossi. Based in Chicago, this twenty-three year old woman is musically wise beyond her young years. Standing alone on stage, with nothing but a viola, suitcase, microphone and her robust voice, Rossi commands the stage creating an atmosphere both haunting and magical.

Yes, it sounds syrupy, but it’s true. I don’t know a whole lot about the viola, but because of Rossi, I’ve learned that it is quite possible to actually rock the viola. Switching from traditional play, to plunking it like a banjo, then strumming it like an acoustic guitar, there’s no telling what she’ll come up with next. So long as she doesn’t pull a grunge rock fit and smash it, I’m happy.

Imagine that, and then imagine her on a vintage suitcase stomping her right foot for percussion. For someone who has a hard time eating a hotdog with condiments, this is an incredibly impressive feat. Her voice is strong but feminine and her songs are thoughtful and lyrically provoking. Following her debut EP Afton, full-length Rockwell was released this past March. Her cello appears on this album as well, adding meatier strings to fill corners. The best tracks on the album belong to ‘Wheelpusher’, ‘Venice’ and her Ace of Base cover of ‘Living Danger’. Don’t get me wrong, there is a place in music for Ace of Base, but Anni does Ace of Base, well, better than Ace of Base. Oh one last thing, she recorded this album in one day.

If she can push her way out of the dark indie hipster corners, this girls star will rise to Feist-like proportions.

If you spend way too much time watching online video, you may have already seen Matt and Kim in all of their naked glory. For the song ‘Lessons Learned’ off of their latest album Grand, boyfriend and girlfriend musical duo Matt Johnson (vocals/keyboard) and Kim Schifino (drums/vocal) strolled through Time Square disrobing one piece at a time. It’s hilarious and artsy but more than anything; incredibly brave. Would you get your kit off in Times Square? No amount of spray tan and tequila would give me the courage.

Regardless, if this is the first introduction you’re receiving to Matt and Kim, it’s a good one. ‘Lesson Learned’ may be the best song on the album, and the video is a spectacular display of creativity and bravado.

Matt and Kim are a lo-fi indie pop-punky kind of a thingy from Brooklyn, NY and while their self-titled 2006 debut created tons of buzz, the rumor was that this time around, they had really dropped the ball. Let me be the first to say, this is a completely misguided untruth.  Beginning with first track ‘Daylight’, Matt and Kim set the tone for an upbeat, interesting melting pot of percussion, dancy beats, hand claps and sing able melodies. I can just picture the energy at a live show and I can’t wait until they next come to Toronto (hint, hint Matt and Kim).

I feel like Johnson’s voice is kind of Billy Bragg-ish, he even seems to adopt a slight English accent in some songs (a la Strokes) but it’s not annoying or anything, it goes with the tone of the music. They’re minimalist in the sense that there’s just the two of them, but unlike their oft-compared musical counterparts The White Stripes, Matt and Kim include synth-laden beats and easily shift into jerky rhythms. It is because of this, I’m going with a pop label, more than a rock one.

I earlier mentioned that ‘Lessons Learned’ was my favorite track on the record, but honestly, it’s a really listenable album and you won’t almost have to fall off of your bike to skip the one or two you don’t like.

Cheery, catchy and cool this could quite possibly be your go-to album this summer.

Metric are back, and like the feeling you get when you see an old friend, it’s instantly comfortable.  Their latest release Fantasies came out at the beginning of April and I haven’t been able to stop listening to it.

Reminiscent of their debut
Old World Underground, Where are you now? Fantasies bring back the synth-pop-rock sounds that made us fall in love with Metric in the first place. Haines vocals are the star of the show (as they should be) and Fantasies doesn’t mess with the Metric backbone. You’ve probably heard their most danceable tune ‘Gimme Sympathy’ on the radio where Haines sings the pleasures and confusions involved with being in a band. If radio music directors aren’t completely out of it, they’ll put ‘Sick Muse’ on next. They might go with ‘Front Row’ (since it’s already been on Greys Anatomy) but no one watches it anymore so hopefully they go with quality rather than following the direction of some tired show.

Haines is back on her synthesizer while guitarist and collaborator James Shaw provides the hooks and jams we’ve been wanting (and waiting) to hear since 2003. He riffs into the beginning of the album on the first single ‘Help I’m Alive’ and continues to prove why he’s as important to Metric as Haines. Before I start sounding like an obsessed fan, I have to mention that Haines steals the show when she simplifies things by performing ‘Twilight Galaxy’ with just her synthesizer and layered harmonies. Emily Haines is one of the strongest female voices in Canadian music right now and along with her mates in Metric, I’d say we’ve got some really good music to look forward to.