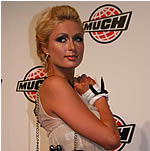 Discuss celeb fashion dos and don’ts with other readers in our forums!

When it comes to celebrity and glamour, Canada often takes a back seat to the sparkle and shine of American red-carpet events.

But the MuchMusic Video Awards is a different animal altogether.

Arguably the nation’s biggest music event, the MMVAs kick off the summer with the hottest party Toronto has to offer. Thousands of fans pile together outside the ChumCity building at 299 Queen St. to hang with hot celebrities and rock out to outdoor performances. Dramatic red-carpet arrivals are themselves a must-see event — this year, Kardinall Offishal arrived in a red-hot fire truck while the members of Hedley pulled up in a white police van, escorted by women dressed as cops in miniskirts and high-heels.

While some pop idols avoided media like the plague, many were more than happy to stop and answer some questions. Read on to see what they had to say at this year’s 17th annual MMVAs!

Judging by the unparalleled earsplitting level of uproar, the hotel heiress was arguably the biggest attraction of the 2006 MMVAs. Gracing the event to introduce Fall Out Boy’s live performance on camera, back in the press room Paris promoted the forthcoming release of her debut album. To doubtful minds, Paris reassures that "just because my last name is ‘Hilton,’ it doesn’t mean I can’t sing. I’ve been doing this since I was six years old!"

Outfitted in a Moschino dress with Chanel accessories and a Paris Hilton-designed bag, she was the quintessential blonde we’ve all come to know. Revealing that for the first time in her life, she’s happy to be single, Paris conveyed that she is 100 percent focused on her budding music career. Contributions by legendary DJ Paul Oakenfeld, who is mixing down her newest single, as well as a number of reggaeton artists, show that she’s dipping her hands in a lot of musical pots to sound legit.

After the awards, Paris was spotted partying at the posh Ultra Supper Club on Queen Street and at The Courthouse, drinking and schmoozing in perfect Paris style.
Elisha Cuthbert

The Calgary-born star of
The Girl Next Door and
24 was at the MMVAs to introduce the performance of Canada’s acclaimed and well-loved indie band Metric. Excited to see Fall Out Boy and Rihanna as well, Cuthbert admitted that her musical tastes are "all over the map." Wearing a short knee-length
black cocktail dress with flared sleeves by Miss Davenport and black Jimmy Choo pumps, the stylish Miss Cuthbert admits that when visiting Toronto, she loves to shop at Holt Renfrew.

The beloved
Desperate Housewives stud had the role of introducing Nelly Furtado and Timbaland’s highly anticipated performance of their new hit single
Promiscuous. When asked about the talent he most looked forward to seeing at the 2006 MMVAs, Metcalfe jested, "Who’s playing?" Pre-MMVAs, Jesse soothed his passion for shopping on Queen Street West at Showroom (396 Queen Street West), where he picked up Diesel jeans and a Ben Sherman short-sleeved button-down. For women’s fashion, Jesse loves "girls who wear those clingy, loose kinds of dresses." Out of all the female celebrity fashion icons, Jesse thinks Gwen Stefani has the best style.

No-Tori-ous and former
Beverly Hills 90210 star Tori Spelling had the duty of presenting the 2006 Best Video award. Wearing a beyond bright island-inspired orange and yellow sheer chiffon dress by Australian designers Camilla & Marc, Tori revealed how she maintains her physique: "By having
lots of sex!" Grinning and winking at her Canadian-born new hubby Dean McDermott, she refers to him as her ‘soul mate.’ In reference to Dean’s sense of style, Tori laughs, "He’s a gay man trapped inside a straight man’s body!" Shopping is one of their favorite mutual pastimes. Another hobby she hopes to engage in soon is cycling. Dean loves to ride, and while he just bought Tori a new pink bike, she has yet to get on it.

Canada’s Next Top Model host Jay Manuel was decked out in a sequined Valentino couture pantsuit at the MMVAs to present the People’s Choice: Favorite International Artist award with his
Top Model co-host Tricia Helfer. When asked for some model tips for the everyday ELLE woman, Jay emphasizes the importance of "wearing clothes that flatter the figure." He adamantly opposes the "bohemian chic look" trend because "it just looks like clothing drapes all over the body." Instead, he suggests, "If you want to wear something that flows, try an empire waist so that it cups the breasts and flares out." In Toronto, he’s a big fan of Anne Hung’s boutique on Queen Street West. "She has sexy hot designs for women!"

Windsor, Ont., native Daniel Victor, frontman of Never Ending White Lights, was nominated in the best
indie artist category at this year’s MMVAs. On his music hot list, Daniel was looking forward to meeting Rihanna and Metric. A stylishly mod rocker and original with his own choice of apparel, Daniel surprisingly admits he has a soft spot for the feminine "summer dress" look on women.

Famed California rocker Amy Lee of Evanescence was appropriately given the duty of presenting the 2006 MMVA MUCH Loud Best Rock Video award. Pixie meets bohemian chic is the best way to describe Amy’s attire. Draped in an ankle-length
fitted floral dress and espadrille platform sandals with her long black hair loosely hanging in a just-got-out-of-bed-but-I-still-look-hot kind of way, Amy was glowing in the press room. Announcing the release of her new album
The Open Door in October 2006, Amy revealed excitement over her new collection of songs.

Miss Bynes could very well be the envy of a lot of young ladies this year for being given the enviable assignment of introducing America’s newly single most eligible bachelor, Nick Lachey. When shopping in Toronto, the 20-year-old California-born actress loves Club Monaco. Her ultimate beauty tip is to get lots of sleep and a beauty product she can’t live without is Neutrogena moisturizer.

Skye Sweetnam
One of Canada’s favorite rockers, Skye Sweetnam didn’t have any serious reason for attending the 2006 MMVA festivities other than "hanging around to keep my face in the scene so that when my next record comes out people remember who I am!" Always dressed eclectically original, Skye was sporting an eye-catching outfit complete with fake eyelashes and big jewel accessories. When asked where she bought her outfit for the evening, Skye revealed that she customizes everything she wears — "I get my inspiration just walking along Queen Street in Toronto, looking for those shops that sell studs and pins so that I can piece them all together and create looks that no one has seen before." Of all the performers scheduled at the awards, internationally acclaimed band Fall Out Boy rocks Skye’s stereo.