All the news you missed while getting your beauty sleep last night, right here. 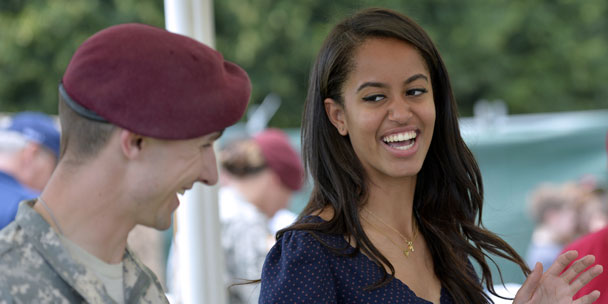 Malia Obama is Lena Dunham’s intern, and wait…what?!
We’re not joking; the 17 year-old daughter of President Barack Obama is definitely cooler than us—and she’s also landed the best summer gig in the country. On Saturday Malia was spotted in Brooklyn’s trendy Williamsburg neighbourhood, doling out cups of coffee for the cast and crew of HBO’s “Girls”. #girlboss Read more.

It’s time to get a grip!
Ever wondered if a little bit of Kevlar was all you needed to supercharge your performance? (This is the kind of idea that keeps us entertained when we’re out for a run.) To celebrate its 5th anniversary as the official apparel partner of CrossFit, Reebok has released the CrossFit Nano 5.0–a training shoe with enough strength to make you Pam Am material. One feature—called the Kevlar BulletCage—dramatically improves grip, stability and traction during your workouts. Read more.

McQ by Alexander McQueen gets a total facelift
We know it’s only July—and you’re just getting into the mood for summer—but the fashion houses are starting to reveal their fall campaigns. Today Alexander McQueen’s successful diffusion line will unveil its new collection and a new logo. The brand’s name is partially blacked out—like it’s been censored. We’re keen to see whether this edgier street vibe defines the new collection. Read more.

Twin Peaks revival: worth the wait?
David Lynch’s cult series 2.0 is back on, but you’ll have to wait until 2017 to find out what Dale and his fellow cast of quirky characters has been up. The show launches 25 years after the original series ended and it will take place in present day. And, cue squealing, most of the original cast will return. In the meantime, Mark Frost is penning a book to explain the missing quarter century, which is set to release before the series premiere. Read more.

More money more problems?
The moon alert continues! If you’re a Cancer this isn’t the best time to be making any big decisions. (Stick to buying shoes rather than houses.) The upside? Besides new shoes, any interactions with authority today may just boost your bottom line. What about the rest of us? Read more.

READ MORE:
How to effortlessly make your summer wardrobe work for fall
From ballet to Beyoncé, here’s how to style a bodysuit
How to sport a pencil skirt like a fashion editor