ELLE First: A petition against Kanye (boo!) and a first look at Kendall and Kylie’s new campaign 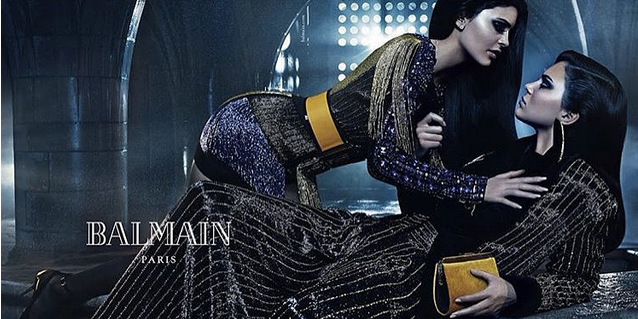 Johnny Depp’s wife could face prison time
Amber Heard could face a maximum sentence of 10 years in prison or pay a hefty fine of close to $100,000 after being charged for illegally bringing her two little terriers, Pistol and Boo, into Australia. She and the dogs had flown there via private jet to visit Johnny Depp, who was filming his latest Pirates of the Caribbean flick. But when they arrived, the pups reportedly didn’t go through customs or the 10-day required quarantine. A court date has been set for Sept. 7.Talk about being in the doghouse. Read more.

Kendall and Kylie’s sister act for Balmain
The stunning sisters are two of the new faces of Balmain’s fall 2015 collection. Joan Smalls and her sister Erika and Gigi and Bella Hadid also scored spots in the sibling-inspired campaign. In other fashion news, Katy Perry is the new face of the H&M Holiday campaign and Anna Sui is diving into the swimwear business with a 35-piece capsule collection. For more beach inspiration, click here.

HBO and Netflix rule Emmy nominations
It’s World Emoji Day, so we’re betting all the Emmy noms are celebrating their happy news with a big smiley face. HBO’s Game of Thrones leads the pack of nominees, earning 24 nods, including outstanding drama. Netflix was also a big winner with 34 noms for its beloved programs, including House of Cards, Orange is the New Black and newcomer Unbreakable Kimmy Schmidt. Read more.

A petition against Kanye? Say it ain’t so.
Some 30,000 people have signed an online petition about the singer’s upcoming Pan Am games closing ceremony performance in Toronto. Their gripe? That the games’ organizers should have picked a Canadian star to perform. Read more. In other Pan Am games news, it’s been an outstanding opening week for Canadian athletes. We surpassed our entire gold-medal count from 2011 the first five days of competition.

Tag Heuer creating a smartwatch
Tag Heuer joined partners with Intel and Google to produce what they are touting as the “world’s first luxury Android wear smartwatch.” The watch, which will be available this fall, will cost about $1,400. What the gadget can do hasn’t been released, but they did reveal it will have a battery life of 40 hours (in comparison with Apple’s 18 hours). We pick our favourite stylish watches of summer here.

Aquarius in for a day of compromises
The good news: it’s Friday. The bad news: you may have to do a bit of a song and dance to keep everyone happy in your life. Understand that today you may have to be a bit more flexible within your relationships. Remember what Annie said: the sun will come out tomorrow. Read more.