What really goes down at a Golden Globes after-party

We hit up the Netflix/Weinstein company party for a front-row seat to celebs in their natural elements. 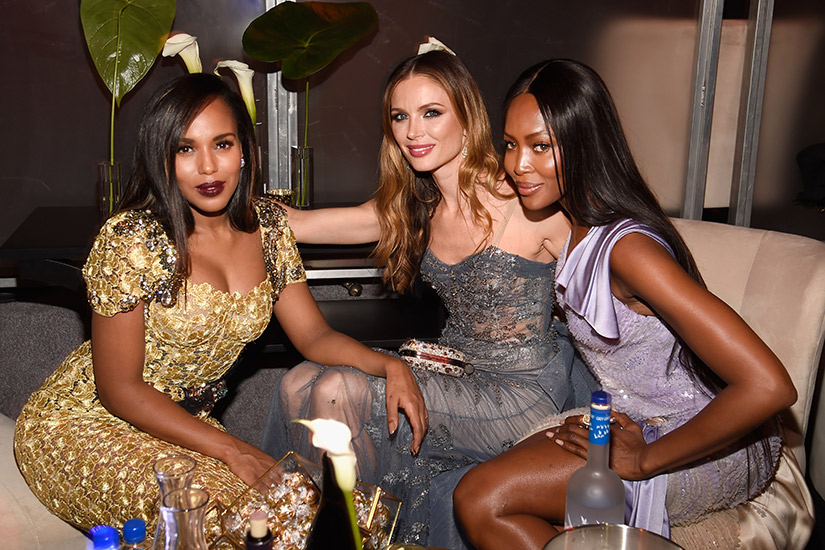 Security is high but not really. Checking in required ID in order to secure the paper ticket for the event. But entering the party was breezy: a flash of the ticket granted us access, and once inside, the suits were either very discreet or not actually present.

The after-parties are a two-second walk from the actual venue at the Beverly Hilton Hotel – but of course there is a very chic shuttle that ferries posh party-goers. It’s so close that the screams from fans lining the red carpet are easily heard – as if they’re in the backyard. It’s excitement and joy, in stereo.

Learning how to pose with @emrata at the #GoldenGlobes after-party ✨?Check our Instagram stories and Snapchat for more behind-the-scenes action.

If you think everyone is hotter in real life, you’re wrong. Many of the celebs we saw up close were beautiful – but no one left us truly stunned. Except for Kerry Washington. Her beauty truly is a special effect.

It’s worth noting that despite Hollywood’s fear of gluten, they serve refined carbs! Brioche dinner rolls, truffle grilled cheese sandwiches and hand-pressed gnocchi were on hand and available from 4 p.m until the party’s end, around 2 a.m. Note: because everyone could be a somebody, you receive superb service from everyone – whether they’re passing around sandwiches or serving you a nitrogen-infused cocktail. In fact, serving alcohol is an art. There were Moët vending machines and Lindt/Grey Goose cocktails that looked like chem class experiments.

Fighting frizz, or losing the battle with the bobby pin dam in the back of your head? No need to bring your hairdresser everywhere you go. Stroll on up to any of the beauty touch up booths, like the Moroccanoil suite, which offered everything from massages with glitter oil to blowout refreshes and style tweaks.

Also cool: the washroom suites are fashioned out of fancy trailers. Because the event was built on a mud pit that some party planner said “felt like a greenhouse during the day,” there were no available facilities so things like toilets had to be transported to the event.

There are SO many after parties, and celebs tend to go all out. Apparently, the first hour of the party is the “golden hour” when the buzz from the awards show hasn’t worn off – and it peters out from there. Some celebs are contractually obliged to appear at these events, even if it’s just to have their photo taken and say a few hellos. Some cut through in less than an hour (Kerry Washington); others stayed until the wee, wee hours (Cuba Gooding Jr.).

The takeaway? Life is better when you are a celebrity.