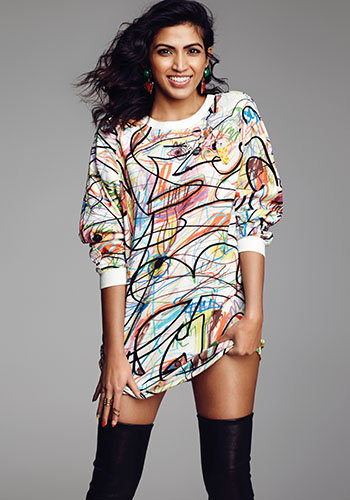 “They’re meant to look like Internet memes,” notes Maria Qamar, who exploded onto the art scene last year thanks, in part, to the Internet.

After being laid off from a Toronto-based ad agency in early 2015, the 25-year-old began creating brightly col­oured doodles that depict her life as a South Asian girl (a.k.a. desi) living in North America.

Within days of posting to her Instagram account, her first two drawings were shared across the Web. “I still don’t add a watermark or signature­­. That’s the concept behind a meme: You just make it and let it happen.”

What happened, specifically, was that BBC profiled the artist, as did Dazed and Vogue India. But Qamar says she knew she really had something when people started requesting prints.

The artist now runs her own shop, selling prints and T-shirts and totes bearing her signature Roy Lichtenstein-esque pop-art. “I grew up in Mississauga [Ont.] and was bullied a lot. My work is exactly how I feel about things—I had no idea that other people felt the same way!”

Her unique sense of humour (phrases like “Trust no aunty” and “Didn’t she wear that sari last week?” appear regularly) has translated worldwide and, having had two exhibits already in Toronto last year, Qamar is now taking her work abroad: She has been asked to create a mural in India.