Are you that know-it-all who is always correcting your family and friends on celebrity facts, rumours and whereabouts? Think you're top drawer when it comes to pop idol trivia? Prove it by taking our ellecanada.com celebrity quiz challenge. 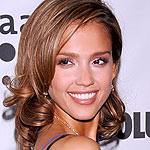 1. Which one of these is not a known nickname for Jessica Alba?
A) Sky Angel
B) Albz
C) a and b
D) JA-dawg

3. Which movie did Jessica make her feature film debut in?
A) The Secret Garden
B) The Karate Kid
C) Cry Baby
D) Camp Nowhere

6. Jessica loves…
A) To play golf
B) Ham and cheese sandwiches
C) The board game Apples to Apples
D) All of the above

8. What kind of parent does Jessica see herself being?
A) “I don’t want to be my child’s best friend. I want to be a mom. But, I want my child to come to me when they have a problem and need to talk.”
B) “I want to be just like my mom. Stern, she always set me on the straight and arrow path.”
C) “I want to learn as I go.”
D) “I am not sure. I guess we will all have to wait and see.”

9. Jessica’s wedding to Cash Warren can be described as:
A) Low key
B) Costing the couple millions
C) Thousands of guests, including the who’s-who of Hollywood
D) Taking place at an exotic locale

10. Which website is run by Cash Warren and backed by Jessica Alba?
A) myceleblife.com
B) hollywoodhotties.com
C) ibeatyou.com
D) jessicaexposed.com

11. Jessica was featured in the following book of essays published this past April:
A) If I’d Known Then (all italics)
B) The Life of Young Hollywood
C) The Real Me
D) Celebrity Parents

12. What is the one thing Jessica says she won’t do in her career?
A) Nudity
B) Get caught up in the Hollywood drug scene
C) Let the paparazzi get in the way of her living life
D) Design a fashion line

13. For which movie did Jessica go to strip clubs to do research?
A) Sin City
B) Honey
C) Fantastic Four
D) Good Luck Chuck

14. What kind of tattoo does Jessica have?
A) The Sanskrit word for ‘lotus’
B) The Japanese character for peace
C) A heart with a cupid in the centre
D) The Egyptian hieroglyphic symbol for virtue

15. Jessica Alba is good friends with…
A) Eva Longoria
B) Eva Mendes
C) Amy Winehouse
D) a and b

Bonus Question:
16. Jessica was quoted in saying her dating style was:
A) “I’m actually really quiet when I first meet guys. I like them to come to me, not the other way around.”
B) “I can come off as snobby when guys first meet me. It’s just because I’m not sure what their intentions are.”
C) “I can be really clumsy when I like a guy.”
D) “I’m really good at being sarcastic with guys. That’s the best way to hang out with them, because that’s what guys like.”

Answer Key:
1. D Her full name is Jessica Marie Alba. And no, she’s never been called JA dawg.
2. D Jessica was born in 1981 in Pomona, California. When she was still a baby her family moved to Bolixi, Mississippi. Three years later they moved backed to California, then to Del Rio, Texas, before settling in Southern California where Jessica did most of her growing up.
3. D In the 1993 film, Camp Nowhere, Jessica was originally hired on for a mere two weeks. But, by a stroke of luck the actress in the lead role dropped out and Jessica stepped in. Although, she openly admits that the only reason she got the part was because her hair matched the first performer’s tresses.
4. D In 1995 Jessica got the role of Maya in the popular TV series Flipper. She spent all of ’95 shooting the first season episodes in Australia. As a strong swimmer and PADI-certified scuba diver she was thrilled to get a gig where she could work with dolphins every day.
5. D Jessica has been on Maxim‘s Hot 100 List from 2001-2008 six times. She was named #1 in 2001, #5 in 2002, #5 again in 2005, #2 in 2006, #2 again in 2007, and takes a recent dive as #34 in 2008.
6. D Jessica reveals all that she loves and hates on her MySpace Celebrity Blog, including her love of board games. She comments: “I know, super cool right?”
7. C Honor Marie Warren was born in Los Angeles and is this couple’s first child. Marie is also Jessica’s middle name. As for why she chose the name Honor, Pamela Redmond Satran, coauthor of baby-naming guides Cool Names and The Baby Name Bible, tells Usmagazine.com, “My guess is that Jessica Alba, going through life as one of several trendily-named ‘Jessicas’ in any room, was looking for a name that was both classic and unusual.” The actress has yet to comment as to why the couple chose that name.
8. A In an interview with Fit Pregnancy, Jessica says she wants to be a tough, yet nurturing mom. She adds that: “It’s going to be about treading that line.”
9. A It was reported that Jessica and Cash’s wedding surprised even good friends. She and Cash did a quick courthouse marriage on May 19th of this year.
10. C Jessica’s husband, Cash, is co-founder of ibeatyou.com with basketball star Baron Davis. Jessica has been featured on the website lip synching to Panic at the Disco’s song Nine in the Afternoon and competing in an online staring contest.
11. A Jessica wrote a letter to her younger self, for the book If I’d Known Then, about being called a “slut” by her elementary school principal and a few PTA mommies. The event that spurred the name-calling? She had kissed a boy when she was seven so he would pick her for her neighbourhood baseball team. She writes: “Boys are awful. They are made of nothing but hormones until they’re about 20 or 21. It’s fun to have a crush, but don’t think it’s forever.”
12. A Jessica says: “I just don’t do nudity. I just don’t. Maybe that makes me a bad actress. But I have too much anxiety.” In 2005 Jessica had a dispute with Playboy Magazine. The publication printed a cover of a bikini-clad Jessica on their March 2006 issue hinting that she posed naked for a spread inside the magazine. Hugh Hefner made a public apology and donated money to two charities that Jessica supports, Keep A Child Alive and Until There’s A Cure.
13. A Jessica went to strip clubs to research her role in Sin City as Nancy Callahan.
14. A The Sanskrit word for “lotus” is on the inside of Jessica’s wrist.
15. D Both Evas have been long-time friends of Jessica’s. It is reported that these three women are all neighbours and according to Eva Longoria, they have a very special relationship with each other.
16. Bonus- D Although Jessica’s not dating anymore as a happily married woman, she has been paparazzied on the arms of Michael Weatherly (2001-2003), Wilmer Valderrama (2003) and Mark Wahlberg (2003-2004).

Mostly A’s: Neutral You sort of know your stuff, but you have been known to mix up celebrity brothers Donnie and Mark Wahlberg. You’re almost there, keep reading your daily dose of Perez.

Mostly B’s: Novice You are way off the mark. You need to bone-up on your celebrity tidbits and gossip. And stop reading The National Inquirer, it’s not the most reliable source.

Mostly C’s: Beginner Your celebrity knowledge may come second or third hand and is for the most part misinformed.

Mostly D’s: Expert You sure are a celebrity know-it-all. You should seriously consider a career as a celerity gossip columnist.