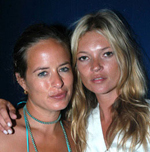 When celebrities become tabloid fodder because of an allegedly scandalous dalliance or drug-induced public display, we devour the sordid details. When they slip away to rehab, we fall in love again. “It’s the process of continuous recreation that makes celebs interesting,” says David Wolfe, a creative director at Doneger Creative Services in New York. “We love to forgive them, as long as they entertain us.”

Naughty In January 2005, Kate’s pals were alarmed when she started dating rocker bad boy Pete Doherty. Their fears about him being a bad influence came true when Moss was photographed allegedly snorting cocaine at a music studio last fall. An instant fashion pariah, she was dumped by H&M, Chanel and Burberry. On the bright side, French Vogue put her on its December cover, even though mid-shoot the scandaleuse beauté checked into rehab.

Charlize Theron
Nice The former model from South Africa began her acting career in sentimental roles such as the trophy wife or the sweet girlfriend in films ranging from The Devil’s Advocate to Sweet November to The Cider House Rules.

Naughty She went from delicious to demonic in the lead role in Monster. She once again cloaked her beauty in North Country, proving that she can dig deep to play a tough character who isn’t afraid to get down and dirty. Her most recent outing as a 25th-century, Lycra-wearing assassin in Aeon Flux clinched her bad, mad talent.

Paula Abdul
Nice She has been the alkali to fellow judge Simon Cowell’s acid on American Idol, passionately coaching contestants and sincerely crying tears of jubilation and sadness.

Naughty She may have been too passionate. The public didn’t know what to make of Abdul when former contestant Corey Clark alleged that the two had had an affair. Abdul kept mum while FOX released statement after statement saying it intended to investigate. Suddenly her wide-eyed gaze, little-girl voice and penchant for Disney-style dresses didn’t seem so innocent. She wasn’t a victim; she was perhaps a cougar who had let a lot of people down. Straight up, now tell us, Paula: what really happened?

Photo courtesy of wireimage.com Madonna, a.k.A. Esther
Naughty She mock-masturbated onstage, had lesbian affairs, posed nude in her book Sex, burned crosses in her videos, starred in terrible movies (Shanghai Surprise with Sean Penn) and became the voice of the me generation.

Nice Madonna has reinvented herself as an earth mother who wears proper tweeds while surveying her posh English estate. She has penned preachy children’s books, and she has even added some matronly tea dresses to her fashion repertoire. Madonna still thrives on controversy — just ask those rabbis about her song Isaac. “I still fight people who try to suppress me. I used to be loud-even obscene. Now I use the power of silence.”

Nice In the film adaptation of Arthur Golden’s Memoirs of a Geisha, Zhang has transformed herself into a demure, beautiful WWII-era Japanese courtesan. Cultured and alluring, she seems to have walked away from her high-kicking, karate-chopping ways to embrace more tender and refined roles.

Angelina Jolie
Naughty For years, Jolie was the poster child for bad behaviour, both public and private. From wearing her then hubby’s blood in a vial around her neck to smooching with her brother at the 2000 Oscars, she clearly liked to provoke. She also became one of the most infamous Other Women in tabloid history by breaking up America’s sweethearts Jennifer and Brad.

Nice As a UNHCR Goodwill Ambassador, Jolie travels from film sets to Third World countries raising awareness about poverty and children’s rights. She has adopted two children — four-year-old Maddox and nine-month-old Zahara Marley — and has donated more than US$1.5 million to the Maddox Jolie Project, which funds community development and wildlife preservation in Cambodia.