Nancy Myers on her new movie and why you just can't have it all...still

A frank conversation with one of Hollywood’s most successful directors about men, women and her three-decade-long career. 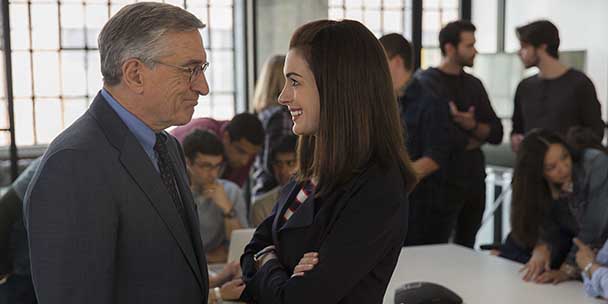 Your favourite Nancy Meyers film will vary depending on your generation—Baby Boom for women coming of age in the ’80s, What Women Want for people navigating the dating world in the early ’00s, The Holiday for everyone everywhere at Christmas—but chances are you’ll love them all for the same reason: her warm-hearted but sharp-eyed take on the way women live. We chatted with the screenwriter and director from her home in Los Angeles about her latest film, The Intern (in theatres September 25), and why she’s focusing on the next generation “trying to have it all.”

You wrote as well as directed The Intern, which is about an older retired man, played by Robert De Niro, who goes to work as a “senior intern” at a start-up run by Anne Hathaway’s character. Where did that scenario come from?

“It started with the idea of an older person being dissatisfied with retirement and volunteering at something that would be new for him. I know lots of older people who feel that they have a lot to give.”

Could you have made this film 20 years ago?

“The movies I’ve made over the years tend to reflect what’s going on with me. I could not have written the older character in this film until I turned 60 because, before then, I couldn’t have understood where he was. This movie is also a heartfelt, loving appreciation of a man.”

What do you mean by that?

“I really appreciated who Robert De Niro’s character was all the way through the movie. I didn’t really change him; he was already in great shape. I’ve noticed that what is being portrayed in movies is a reflection of what has happened to men, so I wanted to write about that and say ‘[De Niro’s character] is a good example of what you could aspire to be like.’”

In your opinion, what has happened to men today?

“We used to have ‘Take Your Daughter to Work Day’ because we wanted to encourage young girls, but we never had ‘Take Your Son to Work Day’ because it was assumed he would grow up and get a job. I remember when [my daughters] were in high school and they would go to a party, they’d wear adorable dresses and the boys would come over and look like they’d fallen out of bed. And I think [for guys] that that has continued into their 30s; they’re still dressing like little boys and playing video games. There have been 10 years of movies about these kinds of guys.”

One of the most interesting people in the movie is Anne Hathaway’s character’s husband.

“I’m not going to talk too much about what happens because I don’t want to ruin it, but he is a stay-at-home dad. I was talking to women and going over the whole ‘How are you treated when you’re a working mom?’ I talked to five Hollywood executives, all in their mid-30s: Four of the five had stay-at-home husbands.”

It feels like an interesting addendum to the conversation we’ve been having for so long, which is “Can women really have it all?”

“This movie is a bookend to Baby Boom from 1987. [Diane Keaton] plays an employee and Annie [Hathaway] plays the founder of a start-up, but the dilemma is still there. I don’t think you can have it all; I don’t think that men can either, by the way. In Baby Boom, the male boss takes [Keaton] out for dinner and says: “I can have it all. I can have a wife and kids, and I can keep working.” That’s a fallacy; he’s lying! He’s missing a lot with his family too; it’s hard—the struggle is hard.”