The rising star shares her deepest fear with us. #safespace 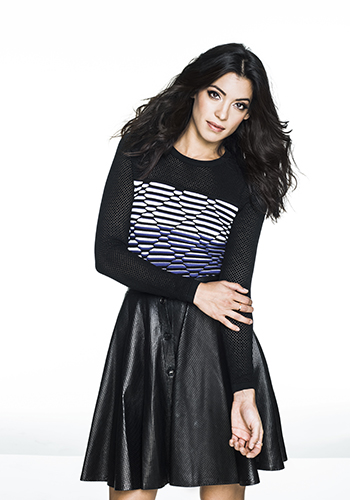 When word broke earlier this year that Stephanie Sigman was going to be the first Mexican to play a Bond girl in Spectre (the fourth instalment of the Bond franchise starring Daniel Craig, out November 6), it was news to Sigman herself.
“I knew I was going to be in Spectre, but I didn’t realize I was a ‘Bond girl’ until they announced it,” the 28-year-old recalls over the phone while stuck in traffic in L.A. “It was such a big deal in my country [Mexico], and I didn’t know I was going to get so much attention. Everyone wanted to talk to me! It’s a lot of pressure!”
This autumn, you can also find Sigman in another high-profile role: She plays Pablo Escobar’s mistress in Netflix’s Narcos, a biopic about the notorious drug lord.
“I actually auditioned for the role of Escobar’s wife, but they called me back for this other role,” says Sigman. “She’s a super-strong, smart woman but controversial.”

Here are three more things you may not know about this about-to-be-huge actress:

She’s a million-dollar baby (in training).
“I box two to three times a week. I don’t like going to the gym because it’s boring. I really like boxing because you have to combine concentration and im­agination. I feel like I’m actually learning something that’s useful. I pretend I’m boxing for real. I’d love to be in a real boxing match, but I can’t because of my face. I’m an actor!”

She likes testing her limits.
“Sometimes being scared of something can be good because it can give you strength. A great example for me would be acting in English! Basically, whenever I’m scared of a project, I know it’s worth it.”

She finds interviews genuinely terrifying.
“Nobody ever tells you that when you do a big film like Bond, you’re going to have to do interviews and talk about yourself a lot. And then things get weird, especially when it’s not your language, and you end up saying things you didn’t mean to.”

The business of being Kylie Jenner