Resilient. Amiable. Self-assured. A woman who reinvents herself and keeps it real. This is Mandy Moore. 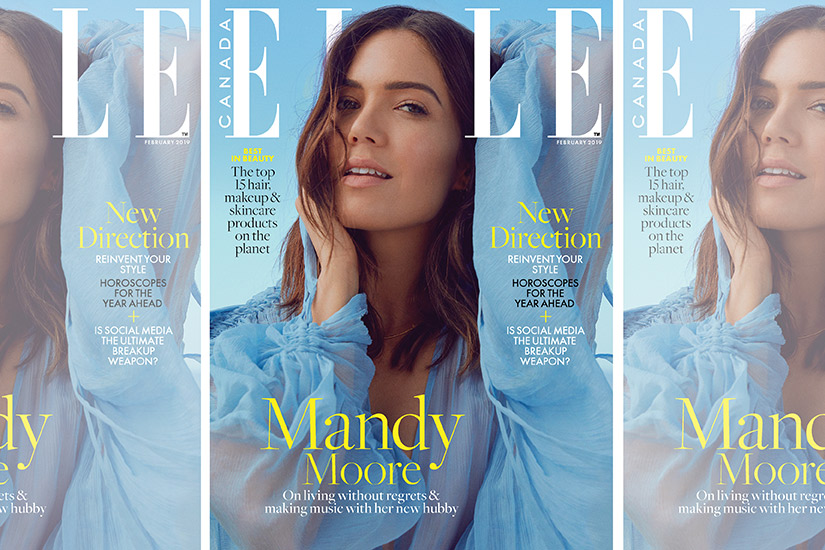 Our conversation with Mandy Moore takes place two weeks after her boho backyard wedding to musician Taylor Goldsmith. We imagine that the actress and her new husband have been happily honey­mooning these past 14 days—maybe on a beach in Thailand or at a vineyard in Napa or, who knows, on a Disney cruise (no judgment). Nope. As Moore explains over the phone from L.A. as she runs errands during some downtime from shooting the “I’m not crying; you’re crying” drama This Is Us, they’ve both been…working? “We went back right after—I think it was literally the next day,” she laughs, her voice effervescent and warm and endearingly familiar. (ICYMI: The ceremony took place at their Pasadena, Calif., home, and the bride wore pink Rodarte.)

In This Is Us, Moore, 34, plays Rebecca, the matriarch of the close-knit Pearson family, a trio of siblings (played by Chrissy Metz, Sterling K. Brown and Justin Hartley) still struggling with the untimely death of their dad, Jack, played by Milo Ventimiglia and his excellent moustache. The Golden Globe- and Emmy-nominated series changed our Tuesday nights forever—and kick-started the second act of Moore’s career.

Moore hit the music scene in the late ’90s at the age of 15, a more wholesome alternative to the Britneys and Xtinas of the world. She later transitioned into acting, with roles in The Princess Diaries, Chasing Liberty and, another sobfest, A Walk to Remember. But as she got older, she struggled to get the meatier roles her acting chops deserved. In fact, she was ready to walk away from the industry altogether when an agent passed along the script for This Is Us in 2015. “You wait an entire lifetime, an entire career for something like this,” she told ELLE Australia. “You just appreciate it and savour every moment. It’s the best job I’ve ever had.” She has since been nominated for a Golden Globe for the role.

That same year, Moore met Goldsmith, who’s the lead singer and guitarist in the folk band Dawes. Their courtship (we’re calling it that because it’s legit old-school romantic) was straight out of a romcom. Moore posted a photo of a Dawes album on Instagram, and he messaged his thanks via his manager, who passed it on to Moore’s team. They began corresponding via email and went out for sushi, but they didn’t see each other again for six weeks because he was on tour. “I completely fell in love with him without having done anything more than give him a hug good night,” she says. This is Moore’s second marriage; she and indie rocker Ryan Adams were married for six years, and she has since referred to the relationship as “unhealthy.”

But all that is in the past now, and Moore is happily, wholeheartedly focusing on her next chapter(s). On the agenda? Music, babies and, yes, she promises, a honeymoon. 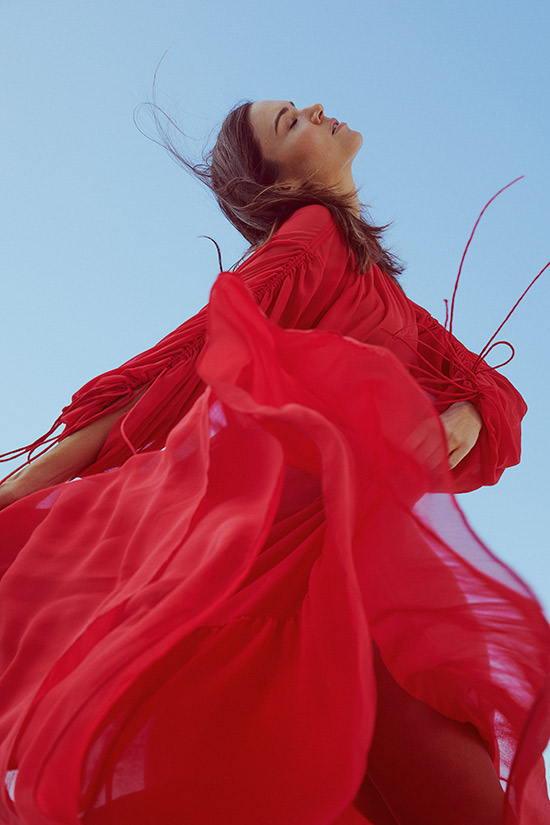 Congratulations on the wedding! Can we have a moment of appreciation for the dress?

[Laughs] “I never really dreamed of a traditional wedding or the quintessential white wedding dress. [She eloped when she married Adams.] I knew that I wanted to make it feel appropriate for the occasion but also just a little bit left of centre. I’m lucky that my job allows me the opportunity to wear lots of pretty dresses all the time. Honestly, it’s one of my favourite parts of the job. That took the pressure off.”

“We feel no different. It’s fun to say ‘husband’ and ‘wife,’ but beyond that, you just jump right back into the day to day.” [Laughs]

And back to work too. What is it about This Is Us that resonates with people so much?

“I think the show forces us all to hold a mirror up to our own lives. There’s something relatable with every single one of these characters and their stories. They’re fallible, but they’re trying to be the best versions of themselves. I also just think that, in this world and at this time, people are hungry for this cathartic entertainment where they’re able to feel all of their emotions, even if it’s just for an hour a week.”

This Is Us came at a time of major career reflection for you. How did you get through it?

“I allowed myself to have days where I felt down. I allowed myself to feel the range of all my emotions. But at the end of the day, I really just had faith that things happen for a reason. And I really believed that something else was going to come along and that there was a silver lining to what I was going through. Obviously, when you go through hardships in life, professional and personal, it makes you realize what’s worth working hard for, what means something to you, what you want in life, what you don’t want in life. I feel like that sort of transitional period is when you really learn the most and you’re building yourself up for the next peak or plateau. During those times when I challenged myself—whether it was physically, like hiking a couple of times a week and connecting with nature, or pushing myself to take an acting class that made me really uncomfortable—I found it prepared me for where I am now because I pushed myself out of my comfort zone.”

Why is it important to you to be open about these ups and downs?

“I think it’s important to just be real. I also wouldn’t know how to share myself and my life with people if I didn’t include all of the different facets and colours of my life. We get caught up in the idea of presenting these cur­ated portraits of ourselves [on social media] and our lives, but it’s just not entirely truthful. Like, our cat died unexpectedly the night before we got married. We share all kinds of goofy stuff about our animals anyway, so it would feel wrong not to include some sort of fitting tribute to her on Instagram. That shit happens. You’re at the emergency vet hospital an hour after your rehearsal dinner, all dressed up. It would feel odd not to be able to share the highest highs and lowest lows with people. And you get a sense of community too. I love feeling so connected to strangers.”

“I’m going to be 35, and I’m very, very comfortable in my skin. Things don’t bother me as much. I’ve never been a woman who buys into drama. I don’t subscribe to it, and I don’t have friends who subscribe to it. Life does seem kind of calmer—it seems a little more figured out. Granted, I don’t have a family yet, so that might change when I do, but I’m definitely willing to embrace that, and I’m excited about it. But at this point, I’m comfortable in my skin, I’m comfortable in my body, I’m comfortable with the choices I’ve made in my life and what has led me to this point. I don’t have any regrets, and I’m excited about aging—I’m looking forward to it. I feel like my friendships are deeper now than they were in my 20s. We’ve all gone through stuff together. I would not go back to my 20s for any amount of money. I love where I am.”

Do you ever get the itch to start singing again?

“[Taylor and I] are making music together already! Once I’m done with this season, during the hiatus, there’s definitely going to be full-steam-ahead time dedicated to making music. In 2019, there will definitely be some music out, 1,000 percent. You can hold me to it!”

What was the impetus for this decision?

“Definitely having this groundswell of support and inspiration at home. There’s constantly music flowing through our house. But I can’t discount the show and what that has brought into my world. [Her character is an aspiring musician.] It’s allowed me to sort of remind people that I do love to sing, and it’s opened up my world, musically, to an entirely new audience as well. It’s kind of the perfect symbiosis and synchronicity.”

Are you two getting pressure to have babies? How do you deal with it?

“I’m really excited to figure it out and figure out the right time to just be able to with work. It’s a little tricky because it’s so hard to plan…that’s not the way it works when starting a family. You can make plans and the universe starts laughing! But hopefully sooner rather than later. I’m really excited about it, and we have lots of friends who already have kids, so we want to join the club. It’s just a matter of when. But, yes, we both can’t wait.”

[Laughs] “We’re going to take a little time before we [go on a honeymoon]. It might be nice to take a beat and figure out some time after I’m done with the season.”