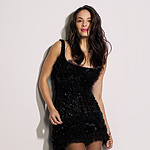 You’ve been ranked number 10 on FHM’s 100 Sexiest Women and number 67 on Maxim’s Hot 100. Are you aware of this, and what do you think about it?
“I’m aware. It comes with the territory. If I had done five shoots for men’s magazines, I’d be a lot higher up on those lists. I think if you look at the other women on the lists, you’ll see they’re all gorgeous. How can you rank these women? They’re stunningly beautiful. It also has to do with how much you’re seen as a sex object in the industry.”

Are young actresses compelled to pose for these magazines if they want to succeed?
“I was talking with another young actress about studios pressuring their lead females to pose in these magazines because it builds a huge following. As a young actress, you know that often, the minute you’re in them, you’re made to sound like a complete idiot. That’s kind of their MO. This particular actress said that people told her that they wouldn’t work with her again if she didn’t do this. She didn’t do it, yet they’ve worked with her over and over again. As an actress, you have to realize that if it’s something you don’t want to do, you have the power to say no.”

How have you dealt with this pressure?
“There’s only pressure if you put pressure on yourself. That is not something I’m interested in. Actually, I’ve fought against it. I’ve clearly set my boundaries now. Instead of thinking ‘Maybe I’m just scared because I don’t want to show my back or walk around half-naked on-set,’ I think ‘It’s not that I’m scared. It’s just that I don’t think it’s necessary for the plot.’ [On Smallville] they know that now. They don’t even have to ask me — they use a body double immediately. I’m not going to go so far as to tell them that just because I won’t do it, they can’t do it at all. That’s not fair to them. Now, there aren’t as many scenes that hint at it; it changes the way I’m seen, and that’s really cool.”

Partition will be released on February 2. For more photos of Kristin Kreuk, click here!