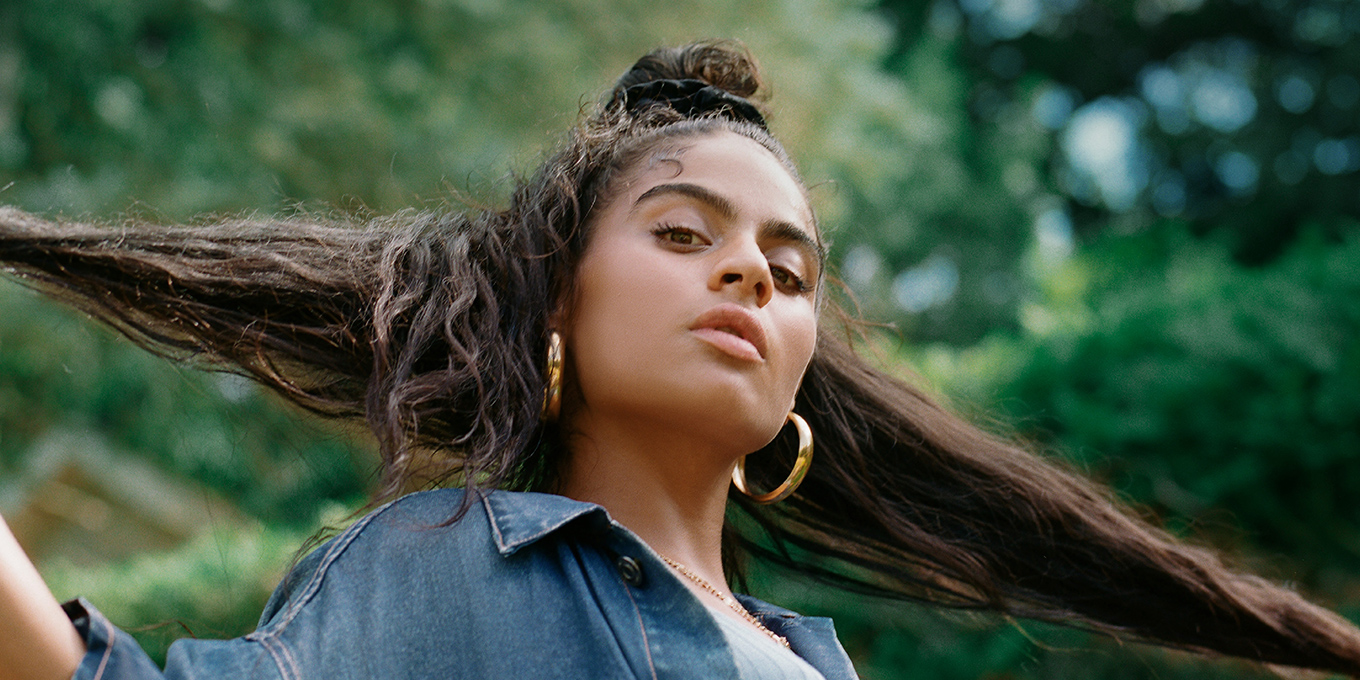 It’s a marvel that several days into a brain-numbing heat wave, Jessie Reyez is still clear-headed and, somehow, sweat-free in the golf-course-size backyard of a sprawling mansion northwest of Toronto in the ritzy outer borough of Thornhill. She’s both passenger and pilot on the set of this cover shoot, attentively taking direction while freely tossing her creative ideas to the photographer. The final look of the day is a devastating, stomach-dropping long matte-black Saint Laurent vinyl dress that elevates body-con to its natural extreme and feels like it should arrive prepackaged with a matching Bugatti. For the last shot, Reyez glides into the massive saltwater pool that’s set back on a hill, submerges fully and then hoists herself up onto the diving board, her arched spine and cascading hair acting as an unbeatable prop.

After the camera’s final click, Reyez, still wearing the dress, executes a near-perfect swan dive into the pool and resurfaces to raucous applause – 10s all around. She was a competitive diver growing up and has had her eye on the diving board since the beginning of the shoot. After drying off, she beams at the homeowner and says: “That pool is paradise. I hope you use it every day.”

The dive is a cheeky and impressive closer – especially since, according to her stylist, Steph, this is Reyez’s first haute-couture photo shoot. “I don’t wear dresses very often,” Reyez admits – her uniform is oversized tees, jean shorts and combat boots. “To be honest, I have wicked anxiety before every single shoot because of some shitty experiences in the past with stylists who were so imposing,” she says when we speak again a few days later. “[When I was] growing up, if you were a tomboy or if you didn’t come from a rich family, you got criticized. I fought through that jungle and came out the other side only to be thrown into this industry and the uphill battle that a lot of women face: If you’re too matter-of-fact with your vision, you get labelled a bitch. That was something I had to learn to navigate.” 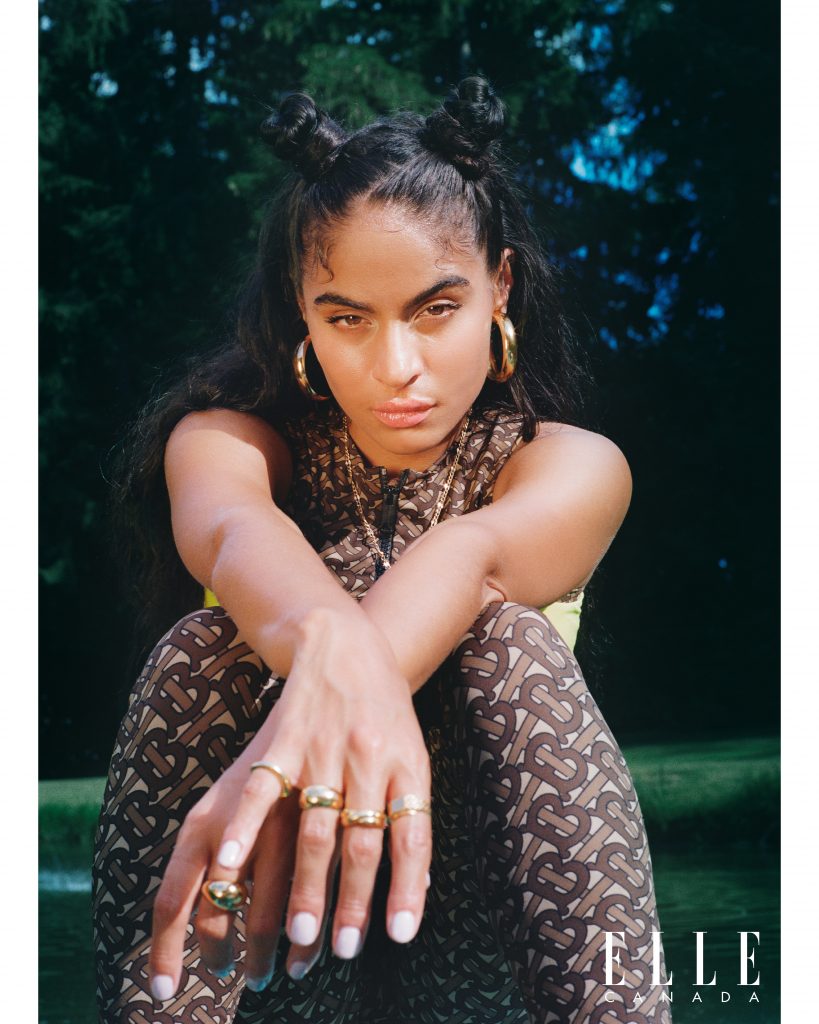 It can be easy to forget that Jessie Reyez still encounters “firsts” despite her ever-growing list of accolades. In the four years since her first single, “Figures,” a sparse and sweeping ballad steeped in dizzying self-awareness, was certified triple-platinum, the now 29-year-old Toronto-based singer and songwriter has received a Grammy nomination and seven Juno nominations for her golden-toned R&B. Obama is a fan, and Beyoncé invited her to collaborate on her latest visual album, the powerful Black Is King.

Wielding an unmistakable once-in-a-generation kind of voice and capable of illustrating all-consuming infatuation with just a barbed snarl or delivering a targeted death wish to an ex-lover in a honeyed falsetto, Reyez has an aptitude for 360-degree story-telling. She’s open-hearted, gracious and absorptive, expertly wrapping profound sentiments of desire and destruction around her finger and then wringing them dry before hanging them up for public viewing.

With sold-out tours under her belt, along with songwriting credits on two of 2018’s biggest songs – “Promises” featuring Sam Smith and “One Kiss” with Dua Lipa (the latter of which spent an impressive eight weeks at number one on the UK Singles Chart), both co-written and produced by Calvin Harris – Reyez was poised to have her biggest year yet in 2020. Her highly anticipated debut album, Before Love Came to Kill Us, which had its initial planned release date pushed back last fall, was scheduled to drop while she was opening for Billie Eilish’s sold-out 35-date world tour.

Though the tour was cancelled, like everything else we were looking forward to in 2020, Reyez says she genuinely doesn’t mind the downtime. “I’m a loner, so I’m just not mad at it,” she says with a husky laugh. “I’ve been reading a lot about abundance living and how you attract things into your life, and the way you attract things is by letting things go.” But to call her specific brand of intuition-guided authenticity – the kind that emboldened her to release “Gatekeeper,” a harrowing song about the music industry’s predatory power holders, months before allegations against Harvey Weinstein ushered #MeToo into the mainstream – effortless is to miss the point entirely. Every day, she actively fights to protect her agency as an artist. “The whole reason I wanted to be a musician is because it felt like home,” she explains. “I don’t ever want to look in the mirror and not recognize myself. If you allow yourself to be a malleable product, then the reality exists that you might fucking fail. That’s what scares me the most; I’d rather bet on myself.” 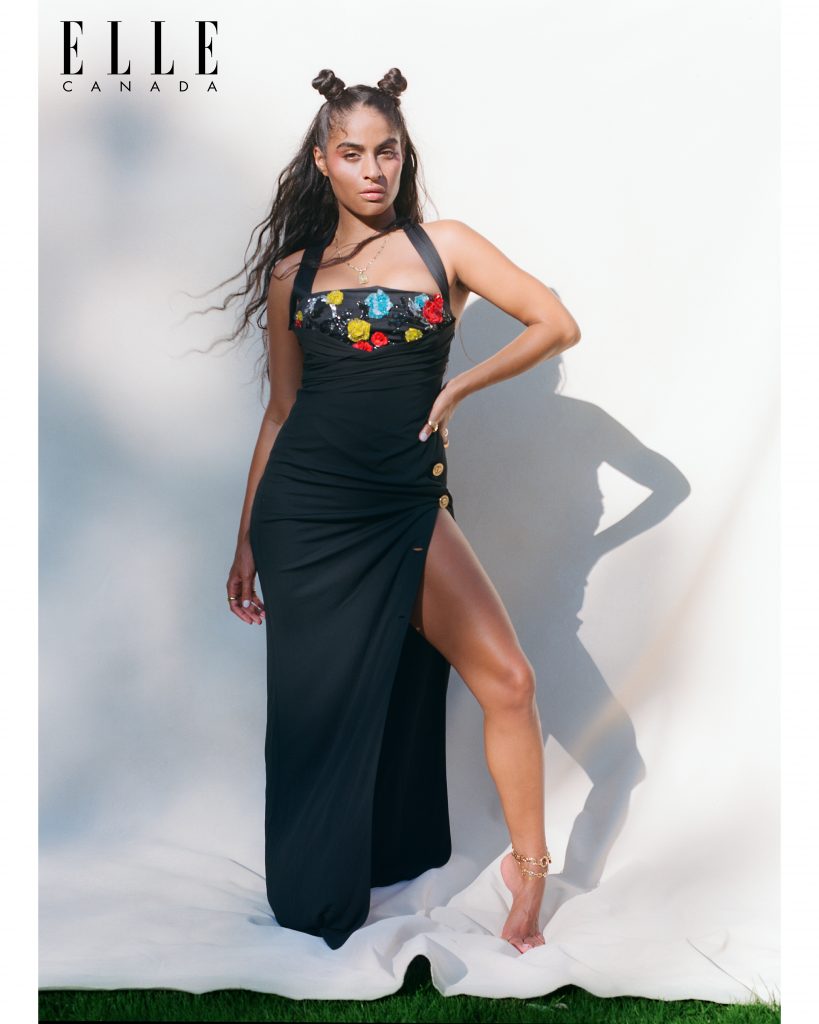 Born in Toronto’s northwest neighbourhood of Jane and Driftwood, Reyez grew up in Brampton before the city became a crucial immigrant landing site, spending her formative years running from the sleepy suburb and travelling downtown toward other immigrant kids with accents and darker skin. Three times a week after school, she’d ride three buses and two subways to attend dance classes in the city’s downtown core. It was a six-hour round trip. “I would do crazy things like that just for the sake of ambition, just to soothe this hunger I had for art and expression,” she remembers. “It became second nature to know that I needed to work hard.”

After briefly moving to Florida, she made her way back to Toronto to attend the Remix Project Recording Arts Academy. Immediately, her talent stood out. “I’ve been in the business a long time and can spot when an artist has something special,” says artist manager and Remix Project educator David Cox. “She was asking me a bunch of questions about the industry; I could see her grind and desire to be heard.”

Most of the music Reyez makes carefully and firmly situates her identity, giving roses to her Colombian heritage and family. (Her favourite colour is “When the red is almost black / And the rose is almost dead,” a detail that she shares on her track “La Memoria,” and her mother has a songwriting credit on “Ankles” for once telling Reyez that other girls “couldn’t come up to [her] ankles.”) Her breakout EP, Kiddo, draped piercing lyrics over an eclectic collection of melodies for before, during and after the club; Being Human in Public, released a year later, in 2018, was loaded with seismic reckonings, both scathing and tender-hearted. And, released this past March (though Reyez had reservations about releasing an album in the middle of a global pandemic), Before Love Came to Kill Us is a stunning debut from an artist who has honed her craft to make music designed to slice through complicated emotional idiosyncrasies with the precision of a scorching blade. 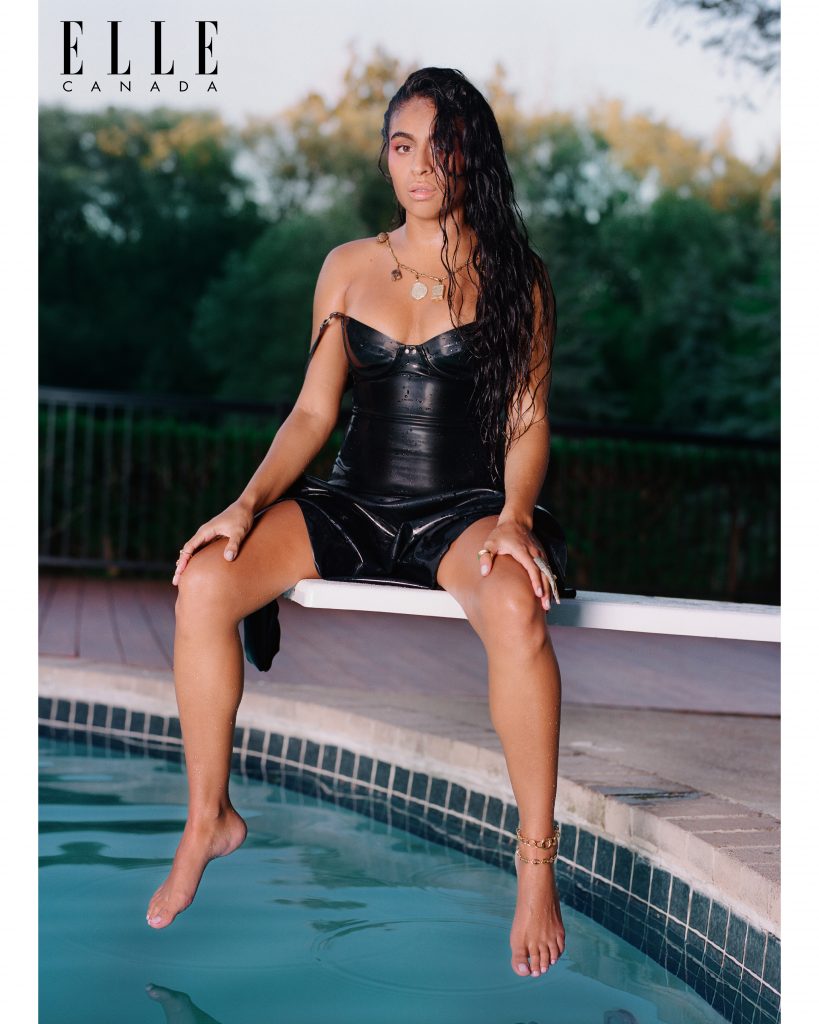 “There was a rawness and spirituality to her vocals that made her stand far above anything I had heard for years,” explains Adam Wiles, who sought out Reyez as a collaborator and has worked with her frequently on records he has produced under the moniker Calvin Harris. “I’m not a massive fan of doing sessions with strangers, but I was too intrigued as to what we might be able to create.”

Their first session was initially scheduled for two days but stretched into five. The next time they wound up in the studio together, they wrote “One Kiss.” “When it’s 2:30 a.m. and I’m falling asleep in front of a computer screen, she’s bouncing around the room with her 11th idea of the evening – and, of course, that’s usually the best one,” he says. “She has soul and memorable lyrics, but she also has rhythm and gets a groove. It’s pretty close to impossible to have all of these attributes. And she’ll come up with ideas that regular top-line writers wouldn’t dream of because she’s an artist first…. I sound like an old man, but in this era of playlist algorithms, everything tends to get a bit homogenized. She’s the antidote to that culture.” It’s not a coincidence that a voice as instructive as hers was cultivated in Toronto during the city’s coming of age, a seminal moment that has produced some of the biggest pop artists on the planet. Having already managed to secure a coveted blend of critical acclaim and commercial viability (she was recently shortlisted for the prestigious Polaris Music Prize for the year’s best Canadian album), Reyez puts out music that evokes the feeling of standing on your tiptoes and peeking at a future in which pop music can be, once again, more meaningful than an earworm beat. “It seems like there was a ceiling, and the city just holds more weight musically,” she says.

Now, Reyez is throwing the weight of her diligent pursuit of restorative justice – a fire that helped her understand pain as a path to healing – toward collective social change. In mid-June, when protests against anti-Black violence and calls to defund the police were reverberating around the world, she was invited to join the CTV special newscast Change and Action: Racism in Canada. “We, as a community, just have to make sure that it doesn’t become a passing headline,” she says. Well, in the first five minutes of the broadcast, she pulled up a set of dismal statistics that laid bare the number of Black employees and executives employed at the three major music labels in Canada before directing her attention to a set of action items. 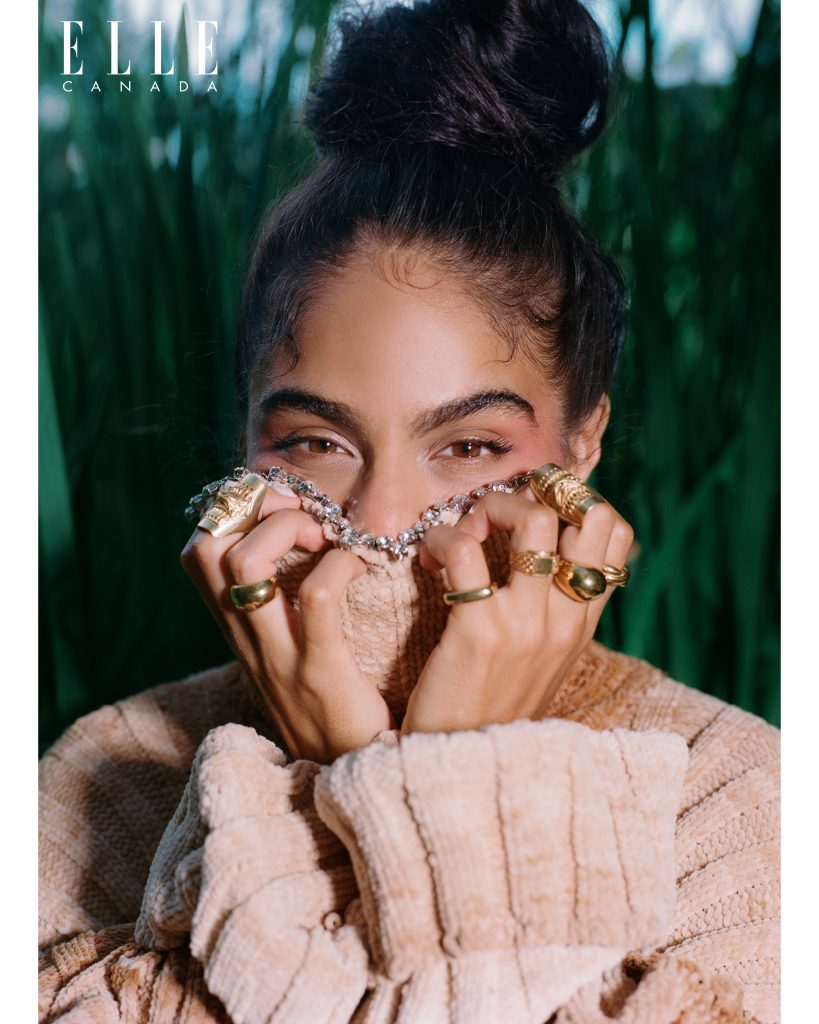 “I want to implore Shane Carter from Sony Music Canada, I want to implore Jeffrey Remedios at Universal Music Canada, who I know personally, and Steve Kane at Warner Music Canada: If you guys are hearing this, or watching this, you guys have the power right now in your hands to be pioneers and to be legitimate allies,” she said. It was effortfully unapologetic. “It was scary, but it still felt like it just needed to be said,” she remembers. “I’m fortunate enough to have an open line of communication with the guy on my label. Jeffrey and I got on the phone and were talking about things they’re going to actually implement to [make] fundamental change.”

It’s hard to imagine a scenario where you could stomach the guilt of trying to lie to Jessie Reyez, let alone attempt to bullshit her. It’s hard to pull the wool over the eyes of someone who investigates the world with granular detail and refuses to give up. So if Jessie Reyez is calling for change, chances are high that it’s going to happen. “I don’t want to waste the power that I hold,” she says. “I don’t want to waste my microphone.” 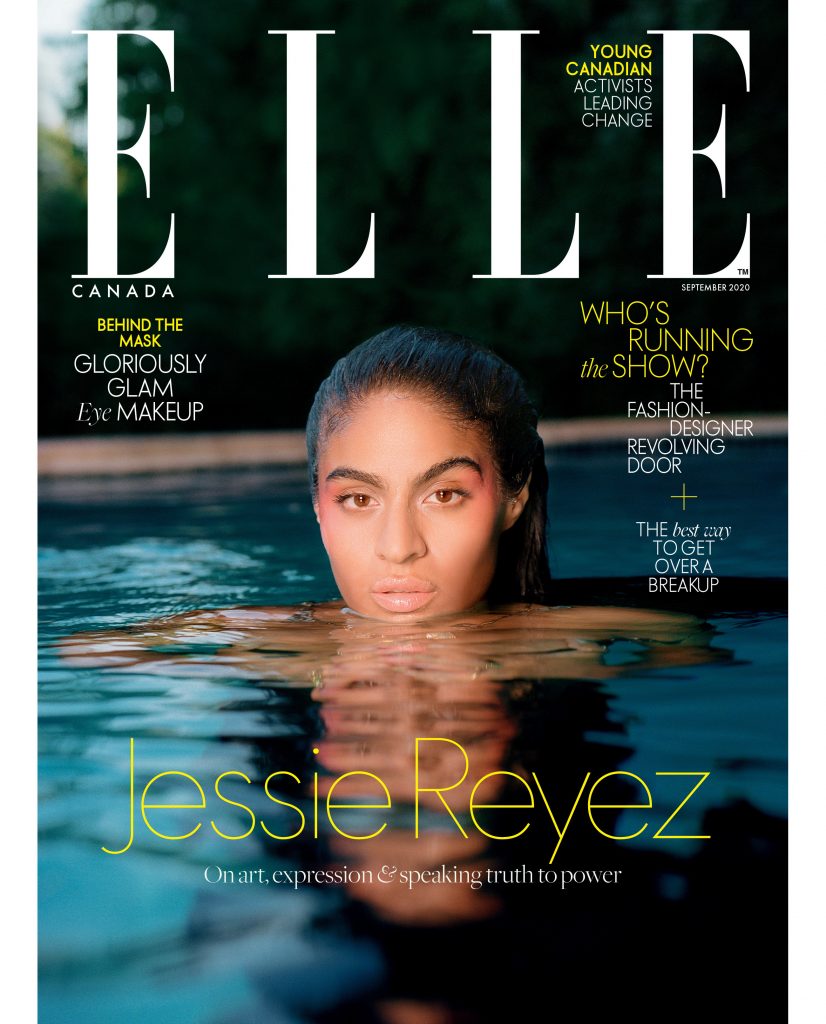 The September issue of ELLE Canada is available on newsstands across Canada on August 17 and on Apple News+. Subscribe here.