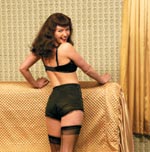 Mary Harron has always been fascinated by celebrity. As the daughter of Canadian icon Don Harron, she grew up observing the impact of fame. As a filmmaker, she has explored the light and dark side of notoriety in such films as I Shot Andy Warhol and American Psycho.

Her latest project, The Notorious Bettie Page, which stars Gretchen Mol, sprang from her long-time obsession with Page’s appeal and her effect on North American culture. “I was particularly intrigued by the bondage shots where she’s smiling radiantly with a whip in some suburban living room,” she says.

Harron co-wrote and directed this provocative look at the career of the world’s most famous pin-up girl. Framed by the 1955 U.S. Senate investigation into the impact of pornographic material on juveniles, the story flits back to Page’s religious roots in Nashville, then weaves through the events that led a preacher’s child to pose in illicit photos. “Bettie’s like Betty Crocker coming out with cookies, but she’s posing with a whip.”

Harron is often drawn to film projects that have characters who are conflicted or battling inner tensions. For her, Page embodied the irresistible mix of a good southern girl who became the sexual archetype. “I’m not trying to give a final answer,” says Harron. “The truth about Bettie lies within her contradictions.”