EXCLUSIVE: Why Alicia Keys feels she's only just meeting herself 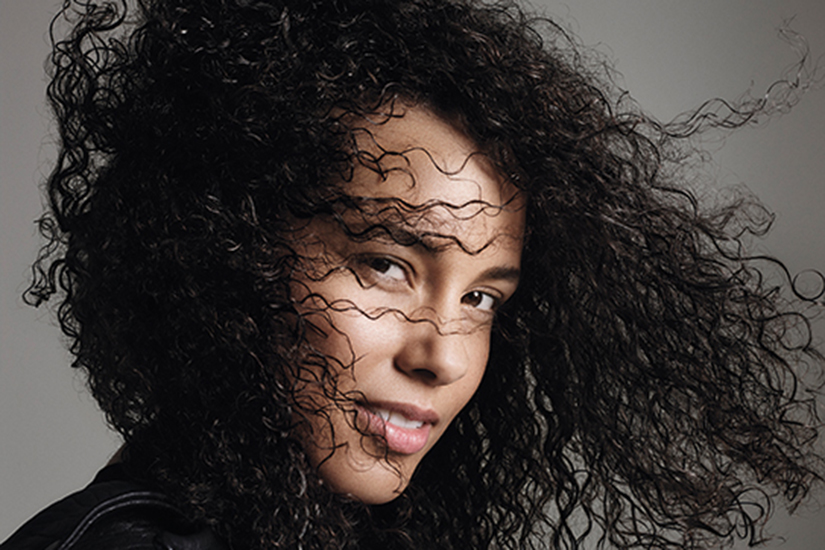 When you put down the phone  after talking to Alicia Keys, you can’t help feeling as if you’ve been to a performance of some kind. Not because she sounds phony or like she’s putting on an act but because there’s something about the timbre and rhythm of her speaking voice, so similar to her immediately recognizable vocals, and the intensity of the conviction with which she speaks (and laughs, loudly and richly) that makes it feel like you’ve pressed the “stop” button on a spoken-word recording rather than just put down the receiver.

Even in a stolen 20-minute conversation (over a not-so-great connection) with Keys, we were able to feel the charisma, star power or whatever you want to call it that has taken the Hell’s Kitchen, Manhattan, native far beyond being a potential one-hit wonder with “Fallin’.” Instead, Keys (real name: Alicia Augello Cook) has released five more chart-topping albums, won 15 Grammys and been named one of the 100 greatest artists of all time by Billboard. Did we mention she married hip-hop artist and producer Swizz Beatz and had two kids during that time period too? We caught up with the singer while she was prepping visuals for her new album, Here. As we head into 2017, Keys says she feels like she’s at a “very powerful moment” in both her personal life and her career.

No kidding: Along with the release of Here, out now, Keys is currently a judge on NBC’s The Voice, where her makeup (or lack thereof) has made headlines and launched a thousand and one think pieces about what it means when a woman chooses to go barefaced (gasp!) on the public stage (and on pretty much every red carpet recently, from the MTV Video Music Awards to the BET Awards). In conversation, however, it’s clear that Keys has a bigger agenda than just stream-lining her get-ready routine; she is out to put a spotlight on “all the things we don’t talk about.” And, along the way, she has made an album that she says “gives people a sense of who [she is] and where [she comes] from.”

Tell us a bit about the making of your new record. “I was able to write this album from a place of clarity, purpose and intention. I’ve never gone into the studio like this before, not really knowing what I wanted to write before I wrote it. That was a whole different process for me because it was so much more fluid—and that was much more powerful. The music is urgent and raw. In a lot of ways, it’s a love letter to New York, because New York raised me in every way, and sonically you’ll hear stories that are diverse the way people in New York are.”

But at the end of the day, the album is about where you’re at right now in your life, right? “It relates to anyone anywhere because it’s about what we all go through as human beings. It’s definitely super-emotional and super-specific, and it’s aggressive in a way that you’re probably not expecting from me. I’m at a very powerful moment in my life and career, and I feel very strongly about it.”

How did you end up here? “I believe that for all of our lives, all of the challenges we experience—the pain, the frustration, the hurt, the devastation—lead up to where we’re headed. But you don’t know where you’re going until you get there.”

Now that you’ve arrived, tell us about this “moment” you’re in right now. “I’ve been on this long journey of covering and un-covering and finding the bravery to be aware of myself. In many ways, I feel like I’m meeting myself for the first time. I’m understanding who I want to be, don’t want to be, what I want to challenge myself with, to keep showing up for. That willingness to be so vulnerable and so honest is kind of new for me because of the nature of the world we live in.”

What do you mean by that? “To tell it like it is isn’t encouraged, but it’s what is so charming about children. What they say is sometimes devastating-—like, ‘Whoa, you’re not supposed to say that!’ But there’s something to be learned from that and not forgotten. Of course, we should say things with kindness and grace, but we should say exactly what we mean at all times. I’ve finally come to a place in my life where I’ve learned how to do that.”

It does feel like, over the past year or so, the world has met a “new” Alicia Keys. “You’re right. I’ve always been the person I am, and when I meet people who knew me in high school or whatever, they say I’m the same, and I love that. It’s a compliment because my spirit is the same; I’m not a changed person in a negative way. But, of course, we’re always growing and learning, and probably over the past two years of creating music I’ve gotten to know myself. It’s like, ‘Whoa, nice to meet you! I never knew this side of you because you h never let it out or you weren’t ready or it was too horrible or you were too afraid.’”

What does that realization actually look like in your life? “You know how you used to react a certain way to things, and then maybe you grow from it so that when you find yourself in that circumstance again, your re-action is totally different? That’s an amazing feeling. Like, my friend told me the other day that she didn’t like something I wore. In my past self, I would have gotten this feeling in my stomach; I would have felt doubtful about my choice and tried to justify why I liked it. But now, when she said it to me, I just laughed and said, ‘I love you too.’”

And that’s all there is to say to that, right? “It was so cool because I looked at myself later and recognized that there was a major difference in my true feelings about that moment. It’s a silly moment, but it really showed me being comfortable with myself and not being able to be shaken. That wasn’t how I used to feel.”

You talked earlier about figuring out who you don’t want to be. So who is that? “I don’t want to be a people pleaser, and I feel like I was that for so many years. That’s totally a woman thing: We’re so gorgeous and amazing and our nature is to care for people, and that is phenomenal. And I am that; I am a nurturer and a loving person, but I don’t want to be a people pleaser
to the extent that it goes further than I’m comfortable with or that it changes my in-itial instinct just to make another person feel better.”

That is always a hard balance to strike—having confidence in your own opinions and wishes while still somehow trying to be a decent human being! “Sometimes I look at my son [six-year-old Egypt] and realize he’s like me in that way. I’m like, ‘Damn, no!’ I don’t want him to be like that, but then I do want him to be like that because he’s so wonderful, and it’s beautiful to see him so open and caring and reaching out to people and wondering if they’re okay. Of course I want him to have all those qualities, but I don’t want it to be to the detriment of himself. And I don’t want to do that myself either.”

Is there anything else you’ve decided you’re not going to be or do anymore? “I don’t want to fall prey to societal pressures. I just don’t want to do that anymore—where you judge yourself so hard because of what every-thing else looks like, what everyone else says. And, man, I remember that starts when you’re so young.”

Oh, it totally starts in kindergarten, if not preschool! “Don’t you remember that in school? It’s like, ‘Jamie doesn’t like me’ or ‘They don’t like my hair,’ and then all of a sudden you go home and you’re like, ‘Mommy, I can’t wear my hair like this anymore.’ Shit!”

And that doesn’t really go away as you get older…. “It gets worse! And now with how the world is shaped, and all of us so closely linked, everyone’s opinion allegedly matters. The pressure is on: if they ‘like’ you or don’t ‘like’ you, if they follow you or unfollow you. I can’t imagine being a young person growing up with this. This whole concept of ‘liking’—to be honest, fuck you! Fuck you if you don’t like it. You have to become more like that because this whole thing of fitting and smushing and pushing—that’s who I really don’t want to be!”

So where do you want to go from here? “I honestly don’t know the answer to that, but I do know that it’s a good place and I only want to go forward.”