EXCLUSIVE: The Walking Dead's Lauren Cohan on finding a place to call her own. 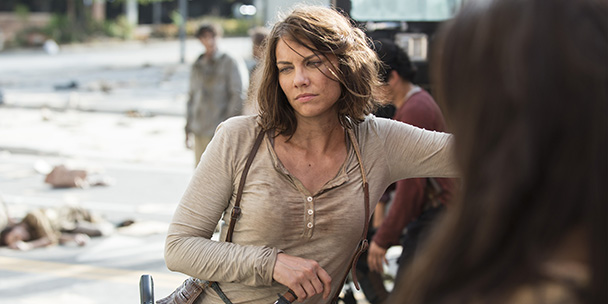 The morning that ELLE Canada chatted with Lauren Cohan, the actress had a minor epiphany. The American-born, English-bred star of The Walking Dead had been reading a script and was struggling to connect with the material.

“It felt a bit thin, like it wasn’t about a real problem,” she recounted over the phone. “And I suddenly thought, ‘That’s why I like supernatural projects!’ The conflict is so tangible; it’s so worth the fight. There’s no arguing with life or death when it’s us versus vampires, werewolves or zombies.”

And although she says she’s a “pragmatic woman,” Cohan went on to add: “There’s something that’s more realistic to me about the supernatural than a lot of pretentious drivel where the stakes aren’t real. I actually can’t learn lines when I’m just talking about some silly thing.”

Which is why she’s lucky that, thus far, the highlights of her career have all included roles that have a touch of fantasy: a 560-year-old bloodsucker on The Vampire Diaries, a nanny to a living doll in 2016’s The Boy and, of course, Maggie Greene on the record-smashing zombie hit The Walking Dead, now in its sixth season.

“I actually just watched an episode, and I felt so thrilled to be on a show that’s written so well for women,” said the 33-year-old Cohan, adding with a laugh, “Not to be weird or anything, but I felt like such a fan!”

Cohan describes herself as an “independent-minded thrill-seeker.” (She’s the kind of person who decides, overnight, to move to California against her parents’ wishes and gives all her stuff away the next day.) But working on this show has had an unexpected calming effect on the formerly compulsive nomad. Not only does its gripping high-stakes drama satisfy her need for action in her life but having to settle in Georgia (where the show is filmed) has also grounded her in a very real way.

“I changed schools so many times when I was a kid,” explains Cohan, whose parents divorced when she was young and moved her from the United States to England when she was a tween. “Being on this show for six years is the longest I’ve been with the same group of people. I realized that, wow, people are there for you. When you lean in, they stand up and let you lean on them. It has been a great life lesson.”

Another thing that putting down roots has taught her? “I was always looking for happiness in a new stimulation, but I’ve learned that sitting still is a really important part of going places,” said Cohan, who recently rediscovered meditation.

“I already have everything I need. I’m at the age in my life where I’m looking at what I have to give, not achieve.”

Irrational love? “Couches! It’s a problem. I buy and return couches all the time because I can’t decide.”

You’re not like her because… “I’m a little more analytical. More neur­otic!”

You hope no one ever calls you… “Unkind.”

Place you usually get recognized? “Not that it matters, but it’s always at CVS when I’m buying tampons!”

You’re happiest when… “I’m with my family and listening to my uncle play Billy Joel.”