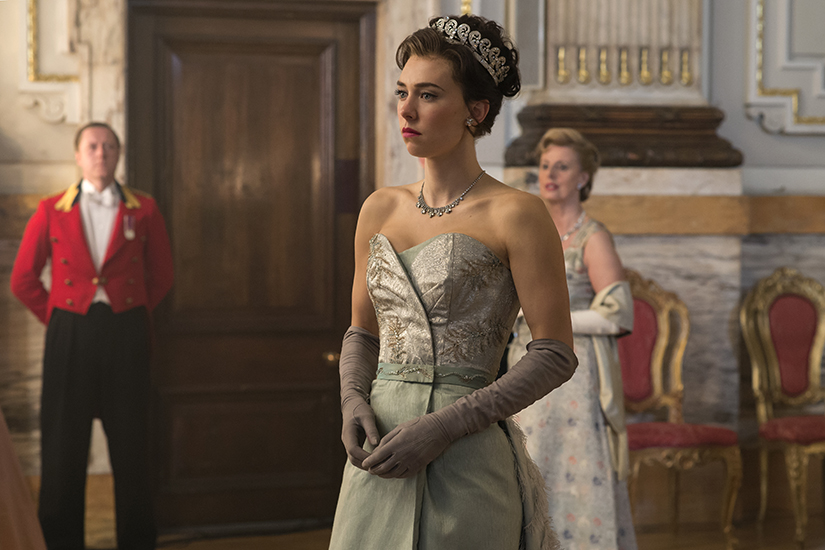 Vanessa Kirby is not about to marry Tom Cruise, despite what you may have read recently. The 29-year-old is not even dating her 55-year-old Mission: Impossible 6 co-star, although those rumours have been around since the spring, when paparazzi shots emerged of the pair “puckering up” in Paris—for a scene in the movie. In fact, the tabloid tittle-tattle came as a surprise to Kirby (and her BF of three years) since it all started before she’d even met Cruise.

“It was very strange,” recalls Kirby over the phone. “It was this whole other world. I have so much sympathy for people who have endless stories written about them that just aren’t true. The only good thing to come out of it is that now my friends don’t believe anything they read in those crap gossipy things.”

She says that it all just made her laugh­ (“it was hilaaaarious”), but she also admits there’s a catharsis in clearing up misinformation. “It’s a very weird time we’re living in, where we believe a lot of lies—I think everyone can relate to that in the world at the moment; it feels good to talk about it because it feels like someone is telling the truth,” reflects the Brit, whose real-life voice is only half a rung down the social ladder from the plummy tones of the princess she plays on Netflix’s The Crown. (Another almost parallel? Kirby’s bizarre brush with fame echoes that of her character Margaret’s “invasive” hounding by the 1950s press, which Kirby calls a “precursor to Diana.”)

Kirby and her The Crown co-star, Mathew Goode.

The Emmy Award-winning show is back on December 8, and just in case you missed its much-raved-about first season, it’s a soapy-but-in-a-sophisticated-way telling of the true story of the House of Windsor—a.k.a. the stuff about Queen Elizabeth, her sister, Margaret, Prince Philip et al. that you can’t glean from official walkabout pictures. Our chat with Kirby is part of her farewell tour for the show: She and her co-stars Claire Foy and Matt Smith will be replaced by other actors in the third season.

Is it true you’re done now because the show is leaping forward and they don’t think you can play an older Princess Margaret? “Yeah. I was very sad to say goodbye to Margaret. They put some names by me [of actresses to take up her torch] and I was just like, ‘Me! How about me?’”

What was that final day on-set like? “I cried the last time I took off Margaret’s wig. I wanted to take it home! We thought we would have reshoots, so my makeup artist for the show, Gemma Hoff, and I were like, ‘This isn’t the last time!’ But then we didn’t need any reshoots.”

Was there anything odd about being on a show where you kind of know what happens because it’s based on real events? “I didn’t read any of the history past 1955 because I knew where she ended up and I didn’t want to play the ending. I was aware that she became quite draconian—difficult, entitled, rude—and drank quite a lot. I had to forget that and play the girl who became that woman.”

This season finds Margaret in a dark place: Unable to marry her first love, Captain Peter Townsend, she is briefly engaged to a friend and then breaks that off. There’s an intense scene immediately afterwards where she’s drunk in her bedroom listening to jazz…. “I trashed that room! I got bad whiplash because I was doing weird things. Margaret was a person who would have these ‘dark nights of the soul’ and have existential pain in a way that [her sister] wouldn’t—Elizabeth would just turn off the lights and go to sleep. The script for that scene said ‘Margaret does a melancholy dance,’ but I really wanted to push it.”

What is a “melancholy dance” anyway? “I didn’t know how to interpret that until the day. We had a brilliant movement coach; I wasn’t really sure I needed her to begin with, but she was essential. She’d shout things at me in the middle of it. It’s so rare to play a character like this who has such a great range of feeling. When she’s happy, she’s ecstatic; when she’s down, she’s very low. I had doubts about whether I was being too over-the-top, but then I began to trust that that’s who Margaret is.”

It’s not a spoiler to say this (because it’s history), but this season Margaret meets the man she ultimately marries: Tony Armstrong-Jones. “Matthew Goode [who plays Tony] is magic! We laughed morning ’til night. We had a plan to go on a night out to all of the clubs that Margaret and Tony went to, but we ended up just staying in one pub, so that didn’t materialize. We spent a lot of time working out the dynamics of their relationship—why they were drawn to each other like moths to a flame.”

Tony is this bohemian photographer type—the polar op­posite of anyone Margaret has ever been involved with. “He’s a match for her. He can actually intimidate Margaret, and nobody else can do that—not her sister, not her mum, not Peter Townsend.”

There’s almost an antagonism to their relationship. “This isn’t a love story. It isn’t Romeo and Juliet. I had this ideal­istic view, because I wanted that so badly for Margaret, but I realized that she has this huge wound that still hasn’t healed, and you see that in Tony too. Each is as lost as the other. They’re clinging to each other for reasons that aren’t about a pure love. That’s so fun to play, and I’m so jealous of the actress in seasons three and four because it will really go into destructive dysfunction. I wanted to smash a few plates!”

Now that it’s all over, what enduring memory will you have of making The Crown? “Desert Island Discs is a radio program at home where people come on and talk about their lives and play their favourite songs. Margaret actual­ly did one. I used to come into the makeup room in the morning, and I’d play all of her music so loud, dominate the space completely. Claire, Matt and I would dance and sing, and Gemma would tell me to sit down and stop wiggling. The family element to it all was so special. It was so full of joy and love—a beautiful gift of a lifetime, really.”