The Pretty Little Liars star talks to us about writing, Hollywood and what makes her happy. 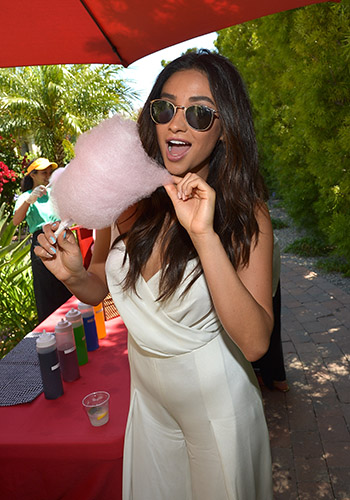 Shay Mitchell (along with her friend, blogger Michaela Blaney) just published Bliss, a novel about three twenty-something friends chasing their dreams: Sophia the aspiring actress stuck waitressing; Leandra the wild child; and Demi, who’s not sure what she is after she breaks up with her long time boyfriend.

We grabbed the Vancouver native for a call in between shots on set for PLL, and here’s what we learned (other than the fact that there are already two sequels in the works):

It all began with a whiteboard:

“Michaela and I were sitting around and talking about how crazy it’s been—we had always spoken about ending up in LA and here we were, and how crazy your twenties are, trying to figure out where you want to go, and trying to find your bliss. I have this giant white board in my garage, and we just went out there and started jotting things down—relationships we’d had, different experiences, things from our pasts. And then we were like ‘This is a lot of material! It would be fun to write a book about the lessons we learned’ “.

She’s more of a reader than a writer:

“I grew up reading Babysitters’ Club, Sweet Valley High. When I moved to Toronto, I didn’t have a tv for the first year, so I read a million Danielle Steele and Jackie Collins. It was an escape that I just loved – still do! I’m not a writer by any means, but I do have a story to tell. For Bliss, we got to work with an amazing ghostwriter, Val [Frankel]. We told our story to her and she put it into words.”

It’s not autobiographical…but it also sorta is:

“It’s loosely fictional. There are certain events that take place in the book that did happen, and certain events that we added to. It’s like a heightened version of our reality. We would mix and match different stories that we heard from friends or people we knew, and added those as well”.

…but she’ll never tell which parts are true and which are fictitious:

“Some of my friends were very curious after they read it! They called me up being like ‘what happened, what didn’t happen, was that guy real?’, and I was like, ‘that’s the fun part of this! You’ll never know’. Some parts of it were therapeutic, getting to put things out there in writing, without having to pin point what’s true or not”.

“I think you find your bliss when you’re happy. If you’re happy, that’s what life is about. I don’t think there will be a certain point in my life where I can say ‘I’ve got this amount of success, I’ve booked this certain project, now I’m happy, now I’m in my bliss’. That’s not what life is for me! Everyday is a success if I’m healthy, I’m surrounded by friends and family who love me, and I can go to sleep proud of who I am. That’s my bliss.”

Canadian crooner Michael Buble on the secret to his success