The Scottish hunk talks to ELLE Canada ahead of the show's next season. 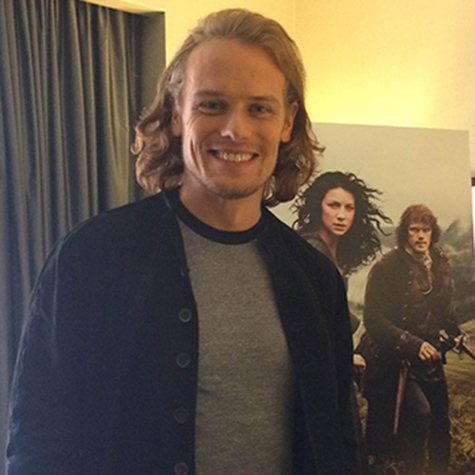 For all you Heughlians out there wondering: Yes, your Scottish mega-crush really is as nice in real life as you all hope he would be. If you ever get the chance to sit down for a chat with the 35 year-old actor like I did (in a fancy Toronto hotel room while he was in town to talk about Outlander, and no, I have no spoilers), there’s a good chance he’ll compliment you at least twice before you sit down, and let his herbal tea get ice cold while he indulges your need to tell everyone you’ve met that you’re currently half-way through a 100 day no sugar challenge (more on that later).

And since we’re deep in the midst of #droughtlander, I can think of no better way to count down the months until the hit Starz series (about a time travelling Englishwoman and the handsome, chivalrous Scot she falls in love with when she falls into the 18th century), than to share this conversation with you, dedicated Heughlians.

SL: Thanks! The lady on the checkout at Whole Foods this morning liked it too.

SH: I was actually just at the Whole Foods round here this morning.

SL: I have an addiction to their broccoli cheddar soup.

SH: I’ve never tried it! I was addicted to the raw kale salad.

SL: Which one? There’s a good one and a bad one.

SH: Uh, the really good one? I’m addicted to everything there really. They do raw pizza that’s amazing.

SL: Are you into healthy eating?

SH: Yes, it offsets the alcohol. [Laughs] No, I do like to eat healthily. I think it’s just the way I was brought up. I just don’t ever crave bad food as such…

SH: Burgers and fries and such. I love a burger and fries but it’s not what I crave. I love to eat healthily.

SL: I’m actually in the middle of doing a ridiculous 100 day no sugar challenge.

SH: So that involves what?

SH: Not really. But I suppose there is sugar in other stuff. I eat paleo for much of the shoot. And I really enjoyed it. I’ve gotten a bit lax recently because I’ve been on a bit of break.

SL: What is your natural hair colour?

SL: So you’re not a redhead like Jamie? [The character Heughan plays in Outlander]

SH: No, although my beard seems to be a little ginger. A lot of my family are redheads, but I’m a dark blonde. So for the show it gets dyed on a monthly basis.

SL: What was it like seeing yourself as a redhead for the first time?

SH: It was kind of crazy. We went through a long, long process of getting it done. It got dyed seven times in the first two weeks trying to find the right colour red. It had a lot to do with the lenses we’re using and then the exposure and the grading of the film and it’s all very confusing but basically it means that they had to counteract the grading of the film to make it a certain colour but it was quite a long process. It was quite a special moment. And that is part of finding the character when you see yourself and you go ‘Oh, yes that’s what he looks like!’

SL: Did you behave differently as a redhead?

SH: I actually do think…. I didn’t behave differently but I think people react differently to you. Especially being a blonde…I recently had a beard or a lot of facial hair more than I normally have, and again people are very different to how you are.

SL: We were chatting about this in the office earlier, and one of the women said that when she dyed her hair red, the kind of guys who would approach her were very different than when she was a brunette. Did you experience that?

SL: I find that hard to believe.

SH: Well, maybe one or two. No…I can’t say. I don’t know. Certainly I like a redhead as much as I like a blonde or a brunette, in fact.

SL: I know a lot of red headed people in general complain about being stigmatized unfairly for their hair colour.

SH: But Jamie’s not really what we call in Scotland a “ginger mullet”. He’s not that very pale skinned, afraid of the sun – he’s quite swarthy and he’s described by Diana [Gabaldon, author of the novel the TV show is based on] as more like “a deer’s pelt” which if you look at is a lot of colours. It’s interesting—red hair changes all the time.

SL: I’ve read that you had a fairly interesting childhood.

SH: I did grow up in a very small town and I only had a couple of people in my year at school. There were a lot of kids to play with, maybe not the same age but there was always someone around. But I did spend a lot of time outside pretending to be various characters from history with swords running through the fields and attacking people. I think I was very fortunate having that kind of upbringing and maybe that’s where this passion to act came from.

SL: Are you still into history?

SH: King Arthur. Really into that. I love all that period. The stories are so interesting. And no one really knows who he was. They come from Wales maybe, the stories, but a lot of other parts of Scotland and northern England have taken those stories. It’s fascinating that there’s places in the UK you can still go and they’ve taken these place names from characters.

SL: Outlander has a certain amount of the “magical” and supernatural in it. Are you one of those people who maybe hope these things do exist?

SL: Do you believe in ghosts?

SH: I think I probably do.

SH: My only one is…my grandfather died, and he had bought me a metronome because I used to play the trombone and trumpet. And I had been away, out of the country for a couple of months and come back, and this thing had been in my room. I never touched it or practiced or anything, so it was covered in cobwebs. I was going to sleep that night and I had found out that he had just died and my window was closed and my door was closed, and I was just falling asleep thinking about him and then it started to tick and tick, and you know, these things you have to wind them and on the top shelf it just started ticking. And I just thought, wow, that’s…there’s no reason that would start then and there.

SL: I feel like Jamie, your character in Outlander, subscribes to a very specific kind of masculinity. Do you feel like you’re at all like him?

SH: I suppose he’s very much a man of the time isn’t he? But at the same time he’s quite forward thinking. He’s always changing his opinion, or at least he’s being forced to change by Claire and to see these things in a new way. I guess he’s a lot more masculine than I am. He certainly would never have make up on his face or get his hair done in the morning. [Ed” Heughan was in full hair and makeup for TV interviews] So maybe we are very different? But I think I am a man of my time and that’s the difference.

SL: What do you think a man should be at his best?

SH: I don’t there should be any preconception. Everyone should just be exactly who they are. We’ve got these stereotypes and I think there can be some trouble when we force these on people. What is inspiring in this show is that men are trying to be true to their word a lot more than people are now, and certainly a man should be held to his word. If a man gives his word that’s it, and that’s honour, and we’ve certainly lost that now.

SL: Do you think chivalry is dead?

SH: Chivalry – no! Not if I’ve got anything to do with it!

SL: What does ‘chivalry’ mean to you?

SH: I guess it’s about being honourable and respecting people and just thinking of others rather than yourself I guess. I don’t know! I’d have to look it up in the dictionary.

SL: There’s a lot of swashbuckling in the show – lots of daring rescues and charging around on horses and stuff. What’s the most swashbuckling thing that you have done in your own life?

SH: I always like to make an effort, certainly. Whether or not it’s quite as successful as Jamie I don’t know. I do remember one time when I was teenager and someone I was pursuing, and I think it was Valentine’s Day and I went to their house with wine and glasses and flowers, and I put it outside their door and waited for them and they didn’t turn up. And then I got this phone call the next day saying I should leave them alone and not stalk them, like it’s a bit scary that you’re leaving stuff outside my door, so it wasn’t really as successful as maybe I was hoping it to be.

SL: So that was it for swashbuckling for you?

SH: I’ll maybe give it a go again one day, when I’ve got a buckle to swash.

Prince Harry being adorable with animals

5 things we learned about Man from U.N.C.L.E. star Alicia Vikander