A quick word before her new show premieres tonight! 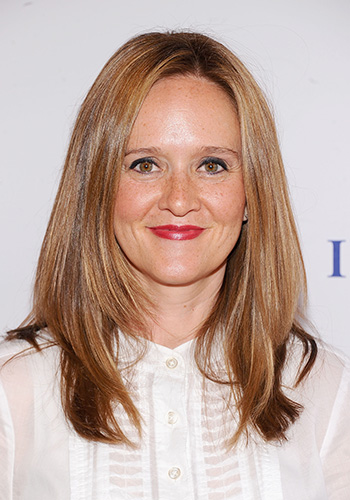 It’s a non-stop cavalcade of activity!” trills Samantha Bee over the phone from New York. I’ve caught the Canadian-born comed­ian (famously The Daily Show With Jon Stewart’s longest-serving correspondent) deep in the development trenches of her own late-night show, Full Frontal With Samantha Bee, premiering February 8 on TBS.

“I can hear people howling in the next room,” says Bee. “We’re having the best day combing through raw footage of [Republican presidential hopeful] Ted Cruz and cutting our own election ads for him, for no other reason than it’s fun.”

If Bee sounds like the best boss ever, it’s no accident. “I’ve thought a lot about the work culture I want to create at this show,” says the 46-year-old. “I want it to be a place where someone like me thrives, and I do my best work when I’m feeling good.”

It seems like a funny juxtaposition—a supportive environment for a show devoted to skewering current events—but that’s a bit like Bee herself. Her golly-gosh manner and Midwestern-y accent (she was actually raised in Toronto) belie a take-no-prisoners approach to comedy (which she’ll need as the only woman on late-night TV).

“The show is called Full Frontal, and that’s our MO—not so much in terms of nudity but auda­city,” says Bee. “Some of the stuff we’re thinking about outputting feels dangerous. It’s titillating!”

Bee says that female-fronted comedy shows are fodder for Internet-troll attacks because, as she puts it, “When you’re a woman on television or social media, this we know: People will do their worst—they are the stuff of your nightmares.”

She jokes that the Full Frontal team is developing a “dark” way of dealing with it: “We’re setting up a social-media account to compile the death threats. Then we can get an intern to go through them, flag the ones that seem a little more realistic and send them directly to the FBI.” She laughs and then pauses. “It’s definitely a joke where the laughter trails off into a darkness.”

Bee grew up planning to go to law school until an acting class took her life in a totally different direction. “My parents would have loved a professional in the family,” she says.

“My mom still thinks I’m doing a cable-access show. She’s like, ‘Is that thing happening? Will it even air?’”