Everything You Need to Know About Princess Eugenie’s Wedding

Including when it is and what it has in common with Prince Harry and Meghan Markle's own wedding. 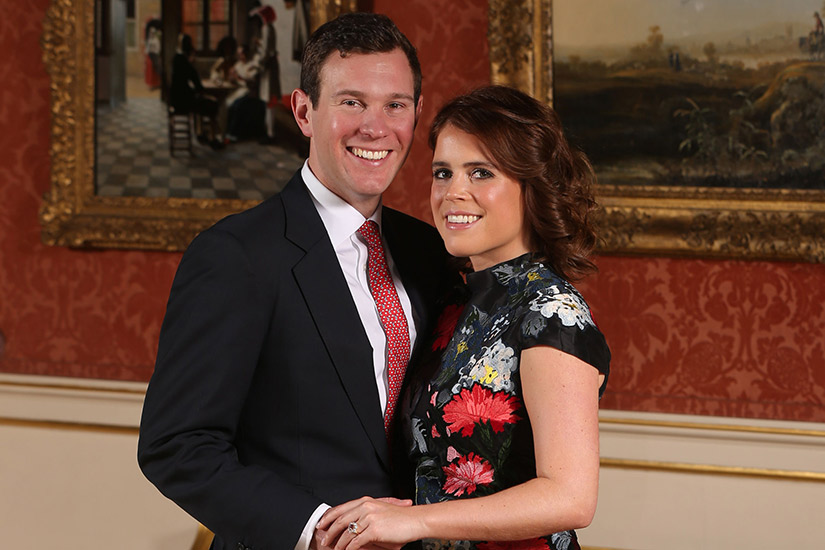 We hope you didn’t put your fascinators away after Meghan and Harry’s May nuptials—there’s another royal wedding coming your way! This time, Wills and Harry’s cousin Princess Eugenie of York—daughter to Prince Andrew (and Sarah Ferguson, Duchess of York)—will be walking down the aisle to marry former nightclub manager and longtime BF Jack Brooksbank. Here’s everything you need to know about the second royal wedding of the year.

You might have to call in sick from work if want to follow this fête. Eugenie’s big day is Friday, October 12—and it’s even earlier than Meghan and Harry’s wedding. The ceremony is scheduled to start at 11 a.m. local time, which is 6 a.m. ET (3 a.m. PT), with guests expected to start arriving as early as 3:30 a.m. ET. After their hour-long service, Eugenie and Jack, like Meghan and Harry, will embark on a carriage procession, although their route will be shorter.

It’s a familiar location for Eugenie and Jack: St. George’s Chapel at Windsor Castle, the site of the Duke and Duchess of Sussex’s wedding. The chapel is at Queen Elizabeth’s weekend getaway and has been home to many royal weddings prior to this year, including Queen Victoria’s children.

Eugenie’s big sis Princess Beatrice, naturally, will play a prominent role at the ceremony, serving as maid of honour. You can also expect to see most of the royal fam—including tight-knit cousins Will and Harry—out to celebrate the 28-year-old’s big day. One possible exception? Kate Middleton. But she’ll have a very good excuse if she does indeed miss out: The Express has reported that if her younger sister Pippa Middleton, who is expecting her first child, goes into labour, the Duchess of Cambridge will want to be by her side.

Of course, a number celebrities are rumoured to have been invited as well. We’re hoping to spot George and Amal Clooney among the crowd—not only were the duo at Meghan and Harry’s wedding back in May, but Jack is a brand ambassador for Clooney’s Casamigos Tequila in the U.K., so it’s definitely a possibility. Royal family pals like Ellie Goulding, Elton John and David and Victoria Beckham may also attend.

Following Meghan and Harry’s footsteps, Eugenie and Jack have also invited members of the public to their wedding. The couple have selected 1,200 people (from 100,000 applicants) from across the U.K., as well as local community members, students and people associated with their charities, to watch the proceedings from the grounds at Windsor Castle.

What will Eugenie wear?

It’s no surprise that the princess is keeping her dress designer under wraps, and there aren’t many rumours to fuel any speculation. But in a rare interview for British Vogue’s September issue, Eugenie did confirm she’s opted for a British-based designer for her gown.

What about her ring?

Eugenie showed off her gorgeous engagement ring, an oval-cut, pink-orange padparadscha sapphire (a rare jewel whose name is Sinhalese for lotus flower) surrounded by smaller diamonds, when her official engagement portraits were released earlier this year.

The story behind the ring is quite sweet as well. When Jack proposed to his fiancée while on holiday in Nicaragua in January, he did so without a ring. The 32-year-old had something picked out, but wanted to wait to design the ring with Eugenie. The pair collaborated to add the diamonds around the stone once they returned from their trip. “Why I loved it so much is it changes colour from every different angle you look at it, which is what I think of Eugenie,” he told the BBC, with his bride-to-be smiling beside him. “She changes colour and it’s just so amazing.”

Will they get new titles like Meghan and Harry?

The short answer: probably not. This isn’t really a surprise, as Eugenie isn’t a working royal (she works as an associate director at an art gallery). She’s also further down the line of succession (ninth, at the moment). However, she will get to keep her current title, Princess Eugenie of York, and even has the option of adding to it. According to the BBC, the royal can choose to take her husband’s name, which will make her HRH Princess Eugenie, Mrs. Jack Brooksbank.

Can I watch the wedding live?

Hold off on planning your viewing party, because that’s TBD. It’s been reported that the BBC will not be broadcasting the entire wedding—though they will, of course, be reporting on it—but that doesn’t mean it won’t be televised elsewhere. You’ll also remember that the Royal Family’s official YouTube channel had a livestream running during Meghan and Harry’s wedding, so that also remains an option for Eugenie and Jack’s nuptials. None of this has been confirmed yet, so we’ll keep our fingers crossed.