Everything you didn't know about George Clooney's fiance

Before he got down on one knee for Amal Alamuddin, George Clooney spent quality time with one (or a few) other famous and non-famous lady friends. 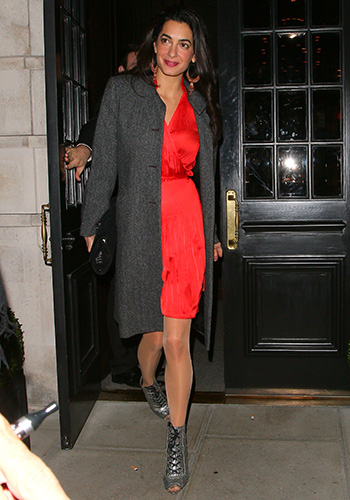 To celebrate the fact that she is, in fact, a person in her own right, here is everything you need to know about the woman currently wearing a diamond ring purchased by George Clooney. (Other than the fact that she’s a super smart, big-deal human rights lawyer who lives in London).

GALLERY: The best celebrity couples of all time

1. She’s trilingual
Born in Beirut, 36 year-old Amal speaks both Arabic and French, and we assume also speaks English for the benefit of old monolingual George.

2. She’s a fashion girl
Amal eschews ill-fitting powersuits, instead taking on world leaders and global criminals in a wardrobe that would make any fashion blogger weep with envy. She’s been spotted in Chanel, Balenciaga, Roger Vivier, Miu Miu and more.

3. She had a celebrity twitter following
Before deleting her account (post-George-relationship-going-public), Amal had 1,800 twitter followers, who included Ashton Kutcher and Julia Gillard, a former Australian Prime Minister.

RELATIONSHIP ADVICE: How to really heal a broken heart

4. She’s a writer
While it’s not quite a second life as a wildly successful romance novelist, Amal is a published author in the legal field, co-authoring a law book that sounds too boring to even name, but I’m sure required all of her super-smarts and is a big accomplishment.

REAL TALK: Why being “just friends” is this guy’s worst nightmare

5. She’s got a cool mom
Amal’s mom is a respected broadcast journalist (who also apparently looks like Elizabeth Taylor in certain lights, especially when wearing large diamonds). She’s also a big fan of the whole George situation, having “liked” an article on her Facebook about the new couple.

6. She resisted George
The two met at a charity event, and while George was thoroughly taken by Amal’s glossy locks and rapier wit, she wasn’t so into old blue eyes, and actually turned down his number. George (or his personal assistant) managed to get Amal’s email, and sent her a “flirty” email (interpret as you will; some rumours suggest a line about the hottest man should get together with the hottest barister, referencing a website that voted Amal the number one lady lawyer in London, which would mean Clooney did some serious Google stalking). Whatever was in that email, Amal was into it, and eventually the two started dating—and the world was never the same again.

7. She’s a Downton Abbey superfan
Amal is a massive watcher of the Crawley Clan’s saga, to the point that she is planning to have her September (maybe October?) wedding at the castle where the show is shot.

READ MORE:
The ultimate guide to romance
What happens when you marry a bad boy?
How Alexa Chung overcame heartbreak