She was born into the spotlight, but the untameable Emma Roberts is earning her own place in Hollywood. 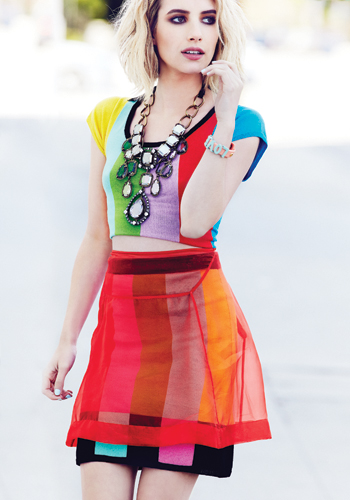 Emma Roberts is hunched over her coral iPhone, which looks like it has been run over by a monster truck and is being held together with tape. She’s tweeting with fans. Questions from around the world are shooting over like flares. “Do you like pickles?” asks a follower, which makes the 23-year-old actress laugh before she scrolls past. (She later pulls out her dog-eared copy of
Ask the Dust to check the title before answering a very excited British girl’s query of what she’s reading.)

We are in Los Angeles and have spent the day shooting ELLE Canada’s first live cover. The excitement that comes with doing something experimental is still crackling in the air. It’s fitting that we’re forging into the digital future with Roberts—niece of Julia—because she might just be the ultimate embodiment of modern Hollywood: She’s outspoken, fiercely stylish, glued to her social media, friends with fellow former child star
Miley Cyrus and, above all, surprisingly talented.

Born in New York to notoriously stormy actor Eric Roberts and his then girlfriend Kelly Cunningham, Roberts cut her acting teeth on projects like Nickelodeon’s
Unfabulous in 2004 and
Nancy Drew before branching out to flicks like
We’re the Millers and
American Horror Story (
AHS). In fact, she has done a lot of growing up over the past few years. She fell for
AHS co-star Evan Peters and then, last year in Montreal, had a fight with him that led to the actress being arrested on suspicion of assault. (She was released without charge the next day.) When asked about the incident, she merely shakes her head, unwilling, or unable, to talk about it.

GALLERY: Behind the scenes with EMMA ROBERTS

Roberts’ rocky entry into adulthood makes her performance in
Palo Alto especially moving. In the film, based on James Franco’s book of the same title, the actress plays a teen who is confused about what she wants and what it means to grow up. Her character, April, is caught up in an affair with her much older soccer coach, played by Franco. “You’re young,” he says to her in the film. “You don’t know why you do things.”

It was a role Roberts had to have. “I read James Franco’s book the day it came out. I fell in love with it,” she says with a smile. “It captures youth in a very honest and strange way that a lot of books seem scared to do.” But first-time director Gia Coppola had already cast the part. Roberts was crushed, until her phone rang one morning. “I’d gone out on Halloween and stayed out really late,” she explains with a laugh. “I got woken up by my house phone. My manager said, ‘Someone fell through on
Palo Alto. Can you go and meet Gia right now?’ I was still half in my cat costume from the night before and jumped out of bed into the shower. I was like, ‘I’m going, I’m going!’ A week or so later, we were on set!” She laughs in a way that implies she’s happy but not surprised by the outcome. She tucks away her iPhone as we sit down to talk about her compelling life.

“It’s funny…I turned 23 this year and I don’t think I realized I wasn’t a teenager until then. It feels like a week ago. My teenage years were fun and interesting because I had such a different life from most people. I was working, and I spent so much time in
New York. The city was amazing, and it was the beginning of my adult life. I’m feeling nostalgic now! But my little sister just turned 13—she has become this angsty teenager who has such attitude toward me and my mom. I feel so bad. Now I know what my mom went through with me! My little sister will be like, ‘With my friends—bye.’ I’m like, ‘Wait, I’m cool! Talk to me on the phone!’” [Laughs]

Do you have advice for her?

“Now I’m telling my mom not to let her go to parties! [Laughs] My only advice is ‘Don’t let other kids tell you who you are because that carries over into your adult life. Some people just aren’t good people to be around.’”

It can take a long time to learn that lesson.
“I think I’m still learning it. I had friends for 10 years that I had a falling out with and now don’t speak to. It’s hard in your early 20s because everyone’s going on their own path and
friendships just fall apart. I’ve known one of my best girlfriends since I was 11 and we still talk every day, but others just don’t last. I used to make fun of my parents for not having friends. Now I see why! It’s hard to find authentic people to keep in your life.”

Is it true that your mom didn’t want you to go into show business?

“She just didn’t want me to go into it young. When you come from a family that’s in the industry, they’re always like, ‘Be a doctor! Be a lawyer!’ But we end up wanting to be actors. Gia and I were talking about that—we love storytelling and movies. I remember feeling that magic when I was, like, seven, visiting my aunt Julia on set. I would go into the
wardrobe room and try everything on. It felt special.”

What movie sets did you visit when you were a kid?

“There’s a Polaroid of me wearing one of my aunt’s outfits from
Erin Brockovich and it looked like I had huge boobs. [Laughs] Then I was on
America’s Sweethearts, which they were shooting at a hotel that had a waterslide. It’s funny the things you remember. I was in the background of one scene wearing a purple shirt, and I thought I was so cool.”

Did Julia give you advice when you were starting out?

“No. No one said anything to me about acting because they hoped it would just be a phase. But I kept doing it!”

It seems like you have a very clear sense of self.

“I’ve always been very opinionated. That’s what comes from being raised by a single mother. My mom always instilled confidence and told me to have an opinion and to
educate myself. But I definitely have my days. I was crying yesterday because I jumped on the trampoline and sprained my foot and was feeling nervous about the shoot today and got some bad news. I was sitting with my foot up, icing it, and being so upset. Then I woke up today and was like, ‘Let’s do it differently.’ There are days when your hair is looking great and you feel determined—then the next day you’re like, ‘My horoscope’s bad, my hair’s bad, I don’t want to get out of bed.’” [Laughs]

Speaking of education, you started at Sarah Lawrence College in New York and then left. Do you intend to go back?

“I thought I would for a while. It’s never too late, but I love travelling and reading. That’s kind of the school that I want to be in: the school of life. Besides, I’m so bad with deadlines—I’m the worst.”

Do you live on your own?

How did the proposal happen?

“That’s something I want to keep more private, because there’s nothing worse than when you talk about a relationship and then everybody feels entitled to ask about it. It’s the only thing I can kind of keep private, and it’s nice to have that.”

“
American Horror Story was so fun because we shot in New Orleans. We worked our butts off, but afterwards we’d go party or on a swamp tour. In New Orleans, you can be more anonymous. We were just gallivanting through the streets and dancing. It was nice not to worry about paparazzi.”

How do you deal with the pressure that can come with social media?

“My New Year’s resolution was to live more in the moment instead of Instagramming it. I love
social media as much as the next person, but it’s important to know when to put your phone down. I went to Santa Ynez [California] and it was nice to actually get in the pool—not just take a picture of getting in the pool, you know?”

“Whenever I’m away from my phone, I get anxiety. But it’s just a habit; it’s not real. Sometimes I fantasize about deleting my Twitter.”

So many people would be upset.

“One day I really just want to throw
my iPhone in the ocean. But maybe just for a week.” [Laughs]

MUST-READ: How to climb the SOCIAL MEDIA LADDER

I know you’re really sociable, but it sounds like you crave alone time.

“When I first got to New Orleans, I was there by myself and I was so scared that my place was haunted. This woman in town told me to leave out an offering of salt, so I put some downstairs and was like, ‘If anyone’s here, please, I’m such a scaredy-cat, leave me alone!’”

What are you looking forward to?

“I don’t want to jinx it, but this has been one of those weirdly amazing years so far. I don’t know what the energy is with 2014, but there’s just something in the air. Things have worked out in a way that feels beyond my control. There’s something really cool about that!”

Jennifer Lawrence on her big break