International superstar Jennifer Lopez talks about power, dating a younger man and the joys of motherhood. 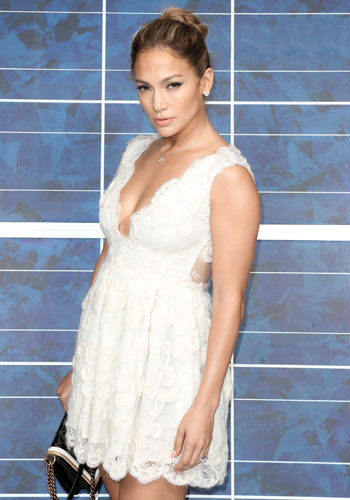 "I’m here to meet Jennifer Lopez at the American Airlines Arena," I told the immigration officer at Miami International Airport.

"The Jennifer Lopez? Good luck, my friend," he said with a smile. He asked no more questions. It might have been a warning for what followed: a two-day odyssey that had me bouncing between five different locations and times, hoping for my interview.

When I was about to give in, the phone rang again: "There is a private function room in the backstage area. Be there when Enrique starts his show." That’s Enrique Iglesias, who is in full swing with "Rhythm Divine" when JLo enters the room, dressed in a sleek grey suit and high heels.

Her press manager follows closely behind, eager to hand out today’s guidelines: no private questions or she’ll walk out. That doesn’t come as much of a surprise. But, as it turns out, there isn’t much that Lopez is unwilling to discuss.

This woman, who is starring in the crime thriller Parker (alongside Jason Statham, in theatres this month), wrapping up a mega-tour, reigns over an empire of music and fashion and grosses $52 million a year, leaves no doubt that she is the one in charge here.

So what do your days off look like?
"Just staying at home with the kids and letting them run around, spending normal time with them – you know, not having to go anywhere or do anything because we’re always kind of on the run.

I know it’s a lot for them. They handle it very well, but I told them just now on the way here, ‘Guess where we’re going tomorrow?’ And they’re like, ‘Where?’ I said, ‘We’re going home!’ They got these big smiles on their faces – they can’t wait. Just like me."

You started your shows on your recent world tour by showing pictures of your children. Is that your way of sharing some private moments with your fans?
"Yeah. When you’re doing your own show, you can craft things exactly the way you want them. Nobody gets to interpret it for you. It was nice to be able to do that.

I think, as an artist, I wanted to really show all the different parts and sides of who I am: who people see me as, who I really am, then me as a mom and then where I am in my life today. I feel like that journey is super-important. There’s no way I could leave them out, you know?"

What are you telling your kids about life? What sort of advice do you give them on a daily basis?
"I hope I’m teaching them about life by example. Like that with hard work you can accomplish anything; that you have to be charitable; that you have to treat people the way you want them to treat you.

You can tell kids things until you’re blue in the face, like ‘Don’t drink!’ But if you drink all day, they’re going to probably wind up drinking. [Laughs] They will pick up on that. I just try to be a good mom and set a good example."

When you were a kid, did you want to become an artist just to impress your parents?

"Well, my mother loved musicals and she influenced me a lot. She loved
acting and musicals, but she never did it herself. But she exposed us to it, and it stuck with me. So, I guess she had a lot to do with that."

You look stunning. But do you ever wake up in the morning and feel like you’re having a gross day?
[Laughs] "Not really. You know, just like anybody else, there are days I feel great when I wake up, and then there are days when I feel more tired or not ready to face the day. To be quite honest, on those days, I really try to think positively.

I try to do a lot of affirmations for good health and positive thinking to just get my mind and my spirit in the right place so I can face whatever it is that I need to face. I remind myself how lucky I am, how fortunate I am to have my children, for all of us to be healthy and to have the life that I have. And to be able to do what I love. And then I try to just go from there."

So what’s next for you?
"We are always into producing and trying to find good projects. We’re working on a 3-D documentary of the Dance Again tour [which finished in December 2012], since it’s my first one. And I’ll probably get into doing a couple films next year."

And a TV-project, called The Fosters, about a lesbian couple.
"Yeah, it’s about a couple who foster children. People are making a big deal about it because of the content. But it’s just a pilot right now. We don’t know where it’s going to go."

What’s his role in your life right now?
"I mean, we’re together."

Does Jennifer Lopez have any dating tips?
[Laughs] "I really don’t."

Do you ever wake up and think "How did this all happen?"
"Absolutely. At this point I’ve been doing it a long time, but sometimes when I do something new, it can be overwhelming.

I feel like people get scared of those feelings, but I don’t think you should be scared of being overwhelmed. It’s a natural feeling. Just feel it and be like, ‘Wow, this is amazing. It doesn’t happen every day.’ It’s exciting."