Twilight sweetheart, Kristen Stewart, opens up to ELLE Canada about growing up in the spotlight, the fame game and how she likes to spend her time in the kitchen. 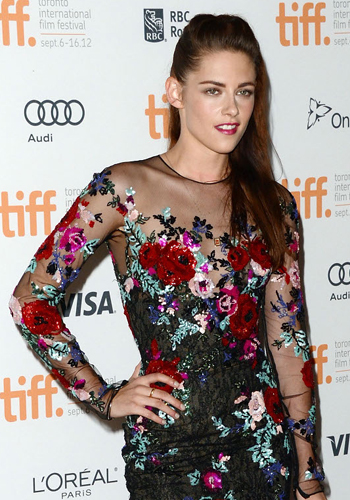 When you are talking about
Kristen Stewart, it seems impossible to keep up with the swirling controversy about her personal life. I spoke with the actress shortly before those now-infamous pictures were bandied about-I have no late-breaking gossip. In fact, I’m going to steer clear of that altogether to avoid Twihard death threats and Twitter rumours.

Here is what I will say… Stewart drops a revealing clue about herself before we have even formally introduced ourselves. "Hi, Kat? It’s Kristen," she says, her unmistakable monotone pinging through cell towers from where she is in Paris to the phone in my hand. That’s the clue. Because that’s not how this generally goes.

Normally, a publicist calls to see if you’re ready to speak to "Ms. Stewart," or any other person famous enough to make it seem rude to initially call them by their first name (even though they’re invariably younger than you). Then the publicist connects you to the assistant, who then (and I have no proof but have often pictured it this way) holds the phone to the celeb’s ear for the duration of the chat.

It seems that, at 22, Stewart is bringing dialing back. But as the sun sets on Twilight, we chat about her role as the face of Balenciaga’s new fragrance, Florabotanica, high-school bullies, pies and learning not to care about interviews.

Congratulations on being named Forbes’ highest-paid actress. How do you measure success?
"Those Forbes lists are fucking bullshit. Really, they’re ridiculous. The list itself is somewhat true but not in detail-not that that matters…. I’m never going to be the type of person who sits on a big mountain of money. Things become stagnant. But on a success level, I’ve never felt more challenged. I’m so ready to work right now. If I can always feel as challenged as I do now, I’ll feel successful."

How does it feel now that the Twilight franchise is coming to an end?

"Most projects I’ve been a part of were tiny. For
Twilight, we had four years to fucking obsess-I mean solely and completely obsess-over this one project and be so indulgent. The odd thing is that the reason you start a project is to finish it: You want that story told. But to have that [tension] last for four years is remarkable. So the relief that comes with it is even more palpable. [Twilight] is something I hold so close, I can’t even tell you. Four years… that’s high school, you know?"

You seem really ambitious.
"When I first started, the whole idea behind it was that I just wanted a job. I looked up to my parents and thought that what they did was so cool. I was born on-set and wanted the adults to talk to me, and it has really just grown from there."

And now you’re involved in fashion. What interests you about it?
"In all walks of life, you meet kindred spirits. I met Nic [Ghesquière] when I was 15. When they said that I was going to do this Balenciaga spread for Interview Magazine, I was like, ‘Whoa!’ I didn’t know any designers’ names, but I knew that. It’s an odd relationship that actors are allowed to have with fashion-I have nothing to do with it; I don’t make it.

Why do you think Ghesquière wanted you to be the face of the fragrance?
"I’ve met certain directors and sometimes you just know instantly. You shake someone’s hand and you think, ‘Whoa, we need to work together.’ So he’ll probably say that it’s because [impersonating him] ‘she has this kindred spirit.’" [Laughs]

You often sound apologetic when discussing your casual style. What makes you feel good?

"Yeah, I do get a little apologetic in interviews about that. It’s not that I’m apologetic…I feel so fucking good in a pair of jeans that fit well. Patti Smith always had a trench coat-something that you can hold onto for 15 years and you can wear anything underneath. So right now, I can’t stop wearing this
Balenciaga biker jacket. Every plane ride I’ve taken in the past six months, I’ve slept in it. I don’t think I’ll ever stop wearing it for the rest of my life-unless I become obese." [Laughs]

Kate Moss is a style icon, and she often wears kicks and jeans. It’s a personal aesthetic, just like any other.
"I like being able to move. I like looking sturdy. I hate clothes that don’t allow you to move around. Clothes can really drag you down."

It’s funny that you want to look sturdy because I think so many girls nowadays want to look delicate, especially in heels.
"I always feel like I’m teetering on stilts, at least on carpets-especially walking around with fans. I hate towering over them. I so want to get down off those things."

You’ve worked with some cool rebels, like Joan Jett. What is rebellious to you?
"With my just having played Snow White, everyone’s like, ‘You play all these strong characters; it must be so important for you to be a strong girl.’ The whole point is that as soon as you mention it, you discredit it. ‘Oh, yeah, strong for a girl. Thanks.’ I think when your perspective is slightly different from other people’s and you’ve got the trust in yourself and the strength of heart to follow that, that’s a rebel."

You were picked on in school. Have you run into any of those kids?
"No. [Laughs] God, I would love to. Not that I would do anything. Just to grow up and see them again, outside of all this, would be an interesting thing…. Hell, yeah. That’s only natural."

You say that what you do for a living is the most interesting thing about you. But what other stuff are you up to?
"The job is strange because everything is rolled into one. My best friends, who are constantly inspiring me, are directors or actors. It’s always like, ‘Maybe we should make a movie about that.’ You never really feel like you’re working and you never feel like you’re not working. I mean, I really like to play music-I play guitar. I don’t know…. What interests you?"

"I love cooking as well. I’m obsessed with it."

What kinds of stuff do you make?
"I love making Italian and good old-fashioned American food."

Do you like baking?
"Not that much. What first got me into cooking was baking pies, but I hated the crust part. I can never get it right. The chemistry behind baking is too rigid. You spend so much time baking something, and then at the end, if it isn’t perfect, it’s just a complete waste. You’re like, ‘I spent my whole day on this shit!’ [Laughs] I’m the most prideful, arrogant cook. I don’t even sit down; I just set the table and stand and watch everyone eat and then eat after."

You seem really easy to talk to. I have read so much stuff about people being hard on you for not being super chipper. Do you care?
"I think that it’s awful when people misinterpret my being uncomfortable as, like, ‘I don’t want to be here.’ It’s really the opposite- I’m too concerned. I absolutely love it so much. I don’t expect to seem cool to everyone; nor do I want to be. I think that’s the opposite of the definition of cool. So I don’t care at all."

Was it always like that?
"I grew insanely…I was really raw, and I shut down almost completely. I think what showed before was the forming of this really rough callus that I’ve actually managed to get rid of. Now I’ve established this boundary line."

That’s probably what going from a teenager to a young adult feels like for most people.
"I think so. It’s just really heightened [because] now everyone is considering it. It’s from such a detached level, like it means nothing. None of this touches you, by the way. Unless you go look yourself up, you’re never going to see it. Although, from the energy in some interviews, you know instantly. It’s like, ‘You absolutely despise me and you don’t even know me.’"