After enduring the end of a four-year relationship, Cat Power is back with a brand new album and attitude. 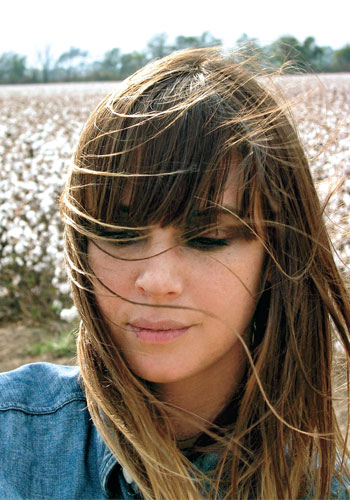 Music, film, fashion. Chan Marshall – a.k.a. Cat Power – conquered them all. Now, after a four-year hiatus and a
nasty breakup with actor Giovanni Ribisi, she returns with her new album,
Sun, and a different outlook on life. But talking to the press just days after her ex-married model Agyness Deyn is probably not the best idea.

After all, she recently lost the man she was with for four years, with whom she wanted to have kids, whose teenage daughter she helped raise and for whom she almost gave up her career. Although it sounds brutal, now, at 40, Marshall is alone, broke and full of doubt.

Today, the "Indie Rock Queen," who ventured into film for My Blueberry Nights (2007) and fashion for the House of Chanel (2006), is wearing a white T-shirt and a pair of black trainers. She chainsmokes while sitting cross-legged on the floor of her large hotel suite in Hamburg, Germany.

Losing her train of thought as often as she reaches for a fresh dose of nicotine, Marshall opens up in an interview with ELLE Canada.

Is Sun your manifesto?
"Are you crazy? Manifesto? Why would you say that?"

Because you’re a 40-year-old woman declaring ‘I want to live my way of living…’
"I know. That’s right."

Is that due to the nasty breakup you went through?
"I was still working on the record when the breakup happened. I don’t know who put that shit in my bio because it’s not true."

So it’s not about overcoming Giovanni Ribisi?
"No. I can’t believe someone said that. If we just broke up three months ago and it took me four years to record this album, someone’s really bad at math."

The album is a reflection of what, then?
"Of my life. Of being…not of my life, that’s so stupid. It reflects my state of mind. That’s for sure."

So, at this point in your life, are you going back to everything you have sort of shied away from over the past four years: touring, modelling and being part of the fashion world? Have you called Karl Lagerfeld yet?
"I saw Karl…. My friend said, ‘Oh, you’re in Paris; you should go to the show.’ And I’m like, ‘No, I’m too fat, I’m too old.’ And she said, ‘No, Chan, you have to go.

Everyone wants to see you. It’s been four years.’ And the day before I went, these huge flowers – I have never seen flowers so huge; they were so beautiful- showed up with a card that said ‘We’ve missed you, we can’t wait to see you, love Karl.’ No one has ever given me flowers like that."

Did you not miss that scene? How did you turn your back on it for years?

"Well, I was living in one place longer than I’ve ever lived in one place in my entire life. And I really wanted to achieve security and family. I wanted to have children with someone. And now that’s not there – it’s really hard because I’m in a situation where I’m totally on my own again. And I have to…um…"
[Pauses and thinks]

You were talking about family, kids and security….
"That’s the real problem with men and women: The pulses in our brain created us differently. And because our brains work differently, the simplest things can be destroyed so quickly through miscommunication. And maybe that’s society’s fault."

Since when do you care about society?
[Smiles] "But you know what I hear as a woman? I hear ‘It’s your rite of passage as a woman to give birth.’ And you know how alienating it is to hear that from a man’s voice? Because it’s my passage to where…. And how do you know what a passage is?"

How do you feel about being called a fashion icon because of your infamous neo-grunge look?
[Laughs] "Sometimes I feel like I’m walking through time; I feel like I’ve been here before. I don’t know what I’m saying…. There’s all kinds of…there are so many patterns and materials these days that are synthetic. And it’s like the quality is gone and it’s only about consumption, you know?

And there’s this attitude of [in a Southern accent] ‘Well, if I could afford me a fancy suit.’ Well, you can. You can go to a thrift store and you can find suits from the ’20s, ’30s, ’40s, ’50s, ’60s and ’70s. And you can get it hemmed and fitted and it’s a brand-new suit. And it’s already lived I don’t know how many lifetimes. I think that’s wonderful and remarkable."

Do you still have your ’50s Silvertone guitar?
"I smashed it in Paris. It was either me out the window or the guitar, so I chose the guitar."

What happened? What made you so angry?
"My boyfriend at the time [Ribisi] was with a girl he said he would never see again. And I found them together under the stairs in the hallway. [Sighs] That was a rough night. That was my birthday."

When you listen to your first couple of albums today, how does it feel?
"It sounds like someone who can’t find her voice."