ELLE Celebrity interview: Actress Sarah Gadon is one to watch

Toronto-born actress Sarah Gadon dishes on celebrity culture, the measure of success, and her role in the much-anticipated Antiviral. 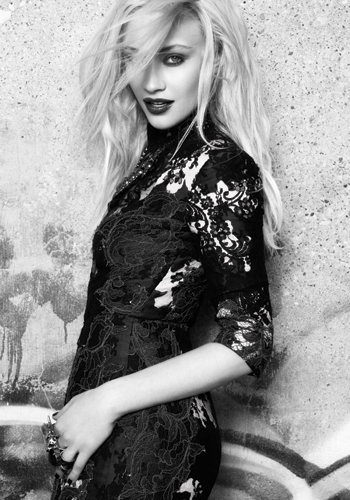 "Writers always set the scene," says Sarah Gadon, choosing her words carefully. "When I read articles about young women, they begin with a description of how they look or what they’re wearing…. It starts with ‘She ordered this with a side of that’ so that we can know how anal-retentive ‘she’ is about her diet. It would be refreshing to me if you didn’t start the article in that way."

The 25-year-old Toronto native is right, of course. It’s very easy to begin a profile of an actress that way—especially when her outfit is casually elegant and what she’s eating, and serving you, came out of her fridge. It’s also business as usual at this point in an article to sketch out the subject’s career arc: to mention that Gadon has been acting since she was 10; that the first time she performed was at the National Ballet of Canada, as one of a group of lambs who "galloped around the stage"; and that she did guest shots on many Canadian television shows before popping up in two films by David Cronenberg, holding her own opposite Michael Fassbender in A Dangerous Method and slyly shutting down Robert Pattinson in this summer’s Cosmopolis. It’s definitely relevant to note here that she’s going to be featured next in Genie-winning auteur Denis Villeneuve’s An Enemy as part of an international ensemble that includes Jake Gyllenhaal, Mélanie Laurent and Isabella Rossellini.

But the fact is, it’s a lot less interesting to try to construct a glossy, idealized image of Sarah Gadon as some sort of It girl than to let her set the scene herself with regard to her career and her startling new movie, Antiviral, which dropped jaws at Cannes and is touching down at the Toronto International Film Festival. “I find,” she says, “that [in magazine articles] actors are not given the opportunity to explain what they want people to take away from their films.”

Learn about Antiviral, Gadon’s exciting new film, on the next page…

Okay. So why should people see
Antiviral, a visceral and, at times, frankly brutal piece of speculative science fiction in which rabid fans inject themselves with live viruses harvested from their

favourite celebrities and butcher shops stock meat patties derived from the DNA of cover girls and matinee idols? And that features more needle injections than an entire DVD box set of
Grey’s Anatomy? "I think that
Antiviral is a movie that’s unafraid to criticize the system in which it functions,” she says proudly. “It’s something brave for a film to do.”

It’s also something that makes it rather difficult to write about in the context of a magazine article.
Antiviral implies none too subtly that the public worship and media scrutiny of famous faces is a kind of cultural disease. Gadon knows this and seems to think that the disadvantage at which it places me is pretty funny. Which isn’t to say that she doesn’t also take it seriously—talk to her long enough and you realize that she takes most things seriously. “It’s important to be self-reflective in this process,” she says, smiling. “The film is about how we create images and how we fetishize them, especially female images.”

And in
Antiviral, Gadon plays a character who is all image: Hannah Geist, an ascendant starlet who is seemingly world-famous for being world-famous. She’s apparently an actress, but we don’t see scenes from any of her films. Instead, she’s introduced to us as a blindingly
beautiful headshot plastered on posters and video screens: a mute emblem of desire with a calculated come-hither smile. It’s probably safe to say that nobody who sees the film will ever forget Gadon’s face.

"I think Hannah is a
modern-day movie star," says Gadon, who was initially reluctant to play that kind of icon. She had to be talked into it by writer-director Brandon Cronenberg, who offered her the part after meeting her at a screening of
A Dangerous Method. “She’s a film actress who has branched off into branding. That’s the definition of a movie star now. It’s somebody in film who has an enormous amount of box-office power and who then franchises herself. I don’t think we see that a lot in films: what a real movie star is.”

While everyone has an idea of what a real movie star is, Gadon is in the process of becoming a big one. In
Antiviral, her character is dangerously overexposed; in real life, it seems like everybody wants a piece of her too. “I was asked to do a profile in a magazine where the concept was ‘a day in my life during
TIFF,’” recalls Gadon. “I remember saying to my agent ‘They haven’t even asked me what that includes.’” Apparently, the editors had created their own fantasy itinerary: a
red carpet, a gift lounge, a lunch…. “It was crazy that someone would want to sell ‘a day in the life of Sarah Gadon’ without asking what it’s like.”

Gadon says that she’s proud of her reputation as “a bit of a negotiator. I’m not the kind of actress who takes whatever comes her way. I’m constantly fighting for parts, for ideas, for the kind of career that I want. You can ask anybody who works with me—it’s exhausting for them…. ‘Can’t you just be quiet and wear this?’ or ‘Can’t you just take your clothes off for this film?’” The last query is not hypothetical. Gadon went back and forth with Villeneuve about appearing nude in
An Enemy: She wasn’t sure it was totally necessary. They eventually compromised on a single shot done only in silhouette. But because her character is pregnant, she had to be fitted with a prosthesis, which was so beautiful and realistic that Gadon went back and insisted it be included in the film. “[Villeneuve] said ‘But we had all these meetings about how there would be no nudity!’ Basically, I won the argument against myself,” she says with a laugh. “But I also think he sort of knew how it was going to end up the whole time.”

While Gadon has good anecdotes about the
world-famous filmmakers with whom she has worked, she can also discuss the work in a way that’s uncommonly articulate not only for many actors but also for most people, period. Because, despite a globe-trotting work schedule that has taken her to Cannes, Venice and TIFF (and plenty of places in between), over the past two years, she has been a student in the University of Toronto’s cinema studies program. Gadon thinks and talks like a critic. She is informed and curious about cinema as opposed to simply interested in promoting the movie she’s in.

Gadon is also aware that most profiles about her tend to mention this “double life”—the student and the starlet—but shrugs it off accordingly. “It’s a little self-indulgent to think that my struggle with my degree is something admirable,” she says. “A lot of people have part-time jobs and are full-time students. I was always taught to look at education as a privilege, and that’s why I’m pursuing it.” The question of pursuit—of chasing and being chased—is something that is very much on Gadon’s mind these days.

If merely watching Antiviral is enough to make me wonder what it means to buy a magazine or download a photograph of a celebrity (or to write an article about one), then being the face of the film (in both senses of the word) must be downright sobering. “I think that from my own experience working with really high-profile actors, there is a kind of vulnerability that exists from being extremely scrutinized by media, by press, by fans, by the public,” she says. “There’s an insecurity that can grow and a vulnerability that exists.”

But Gadon separates herself from these other “high-profile” performers. “I can walk down the street and have a human experience every day,” she says. She sounds humble—or maybe she’s just being cautious. “I’m not an actor who is trying to be a movie star,” she says with quiet insistence. “I’m trying to be a working actor. I’m not in pursuit of fame. I’m not trying to be in the kinds of films that make you famous like that. I think when you focus on the work, it becomes a simpler pursuit.”

It’s obvious that Antiviral means a lot to Gadon, but I wonder what others will think of it when it opens in theatres this fall: It’s such a serrated piece of moviemaking that some viewers may feel skewered (as opposed to affectionately poked by a meek fashion-industry satire like The Devil Wears Prada).

For this very sharp actress, that’s precisely the point. “In the past year, I’ve been around some of the most famous celebrities in the world,” she says. “I’ve seen the lives they lead and the way they’re scrutinized, and the film doesn’t seem that far removed from reality.

“That’s why I love that we’re doing a magazine article about this film,” adds Gadon. “I think it’s really clever—that’s part of the reason I wanted to do this.”

Which is good to hear, because it’s clear that Sarah Gadon doesn’t do anything she doesn’t want to do.