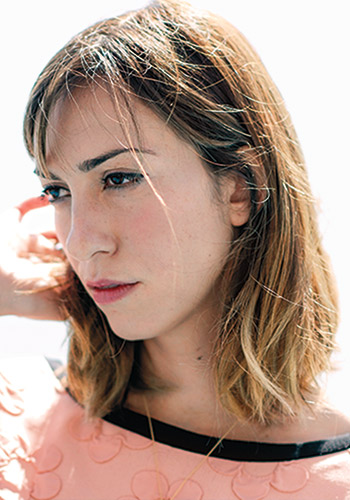 Considering the looming presence of Aunt Sofia, Uncle Roman, Grandpa Francis Ford and cousins Nicolas Cage and Jason Schwartzman, anyone growing up in arguably the world’s pre-eminent film dynasty might be reluctant to have aspirations that require a mastery of blocking or dolly shots.

But over the years, Gia Coppola has logged countless hours on her family’s film sets: as staff assistant in the costume department on Sofia’s Somewhere and as creative consultant on Francis Ford’s Twixt. Right now, kicked back in a Proenza Schouler lace peplum dress, the budding director is happy to talk about what she has learned from her famous family. “My grandpa always tells me that 45-minute lunches are key because an army marches on its stomach,” says the soft-spoken 27-year-old.

There are many parallels between Coppola’s dreamlike debut feature, Palo Alto, and her aunt’s The Virgin Suicides: Both are romantic explorations of teenage ennui. “She’s like a big sister, and if it wasn’t for her, I don’t think I’d be doing this,” she says.

After studying photography and directing short fashion videos for the likes of Zac Posen and Opening Ceremony (which she describes as “an extension of photography but with more challenges, like incorporating writing and music”), Coppola had a chance encounter with James Franco that proved instrumental. Hollywood’s multihyphenate prince was looking for someone to bring Palo Alto, his short-story collection about awkward suburban teens flirting with danger while yearning for connection, to the big screen. “I loved the book,” she enthuses with the kind of emphasis she doles out sparingly. “There hadn’t been anything I had read or seen about teenagers that felt true to that experience in a long time. I really connected with it.”

Steeped in the coming-of-age tales that shaped her own youth—American Graffiti, Fast Times at Ridgemont High and, yes, The Outsiders and The Virgin Suicides— Coppola’s adaptation of the book taps into the emotional thrills, tantrums and insecurities of Franco’s restless characters. Yet she describes the 30-day shoot as tight-knit and “family oriented.” “Nat [Wolff] and Jack [Kilmer] stayed at my mom’s during shooting, and I’d drive them home at night. I think that closeness made everyone feel comfortable and really care for the project.”

It’s easy to forget that such an assured film is actually Coppola’s debut. But she’d never even been to a film festival before Franco took her to Sundance last year. Now in the midst of a whirlwind Venice-Telluride-TIFF press blitz, Coppola admits to being taken aback by questions about Palo Alto’s personal resonance. “I’ve been very surprised by people asking me what my teenage experience was like,” she says almost apologetically, surprised that anyone would take an interest in her own adolescent woes. “I had never thought about that. I guess that was silly of me, but [this movie] was really about me spending time in my own playpen.” Seems like the fun has paid off.