A stylish roundup of iconic movie characters and what they wore in the top fashion films of all time. 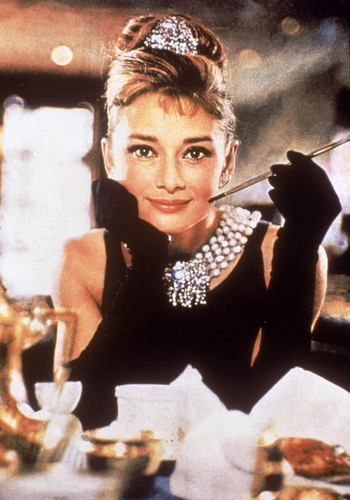 Breakfast at Tiffany’s gave us the little black dress and Annie Hall, vintage menswear, and the rotating styles that emerged in fashion films over the decades have only further solidified the sartorial influence of cinema. So we’re taking a look at some of the most iconic fashion films over time, and the signature outfits they continually inspire, both on the Fall 2013 runways and in the plaid skirt suits that will forever signify our love for Cher Horowitz.

Fashion film: Breakfast at Tiffany’s (1961)
The era: The birth of classic little black dress in the 1960s
Why we love it: There’s nary a roundup of top fashion moments or icons that doesn’t include Audrey Hepburn. And while this is hardly her onscreen fashionable debut (her Italian-style romps in Roman Holiday took place eight years earlier), Hepburn’s Holly Golightly is probably the quintessential style icon of the silver screen.
Signature look: Allow us to recap the dreamy opening sequence in the film: Hepburn glides out of a taxi on Fifth Avenue, her back toward the camera as she stares forlornly at Tiffany’s storefront window, forever enrapturing us with her floor-length Givenchy gown and strand of pearls dancing around her neck.
Fashionable fact: The LBD designed by French couturier Hubert de Givenchy sold at Christie’s auction house to an anonymous telephone bidder in 2006 for £467,200 (approx. $761,715.90)–the highest price ever paid for a dress that was made for a film.

Top fashion film: Annie Hall (1977)
The era: The menswear-inspired fabulousness of Diane Keaton circa 1970s (and beyond)
Why we love it: Because the Annie Hall style of slacks and fedoras will forever link the actress with her well-suited incarnation. Even in the film, director Woody Allen praises the look, when Alvy Singer reaches for her tie and proclaims, “I love what you’re wearin’,” at their first meeting.
Signature look: Annie Hall’s uniform of wide-leg trousers, vest, tie and fedora, which can be found on the Fall 2013 runways in the form of striped three-piece men’s suiting at Moschino and androgynous tailoring at Ralph Lauren and Stella McCartney.
Fashionable fact: Wardrobe designer Ruth Morley reportedly detested the vintage menswear look Diane Keaton wore on set when Allen himself intervened, saying, “Let her wear what she wants.”

More of our top fashion films on the next page…

Top fashion film: Clueless (1995)
The era: The fabulous nineties (before that was a thing)—Alaïa dresses, crop tops and
plaid skirt suits—as if!

Why we love it: Celebrating its eighteenth birthday this year, the film gives us a delectable glimpse into the indulgent life of Beverly Hills teens in the ’90s, spawned a TV series, and is probably what sparked our love affair with Paul Rudd (creepy step brother-and-sister relationship or not—Cher and Josh forever!)

Signature look: The white mini-dress (and our favourite description of it): “Says who?” demands Cher’s disapproving father about the skin-hugging slip. “Calvin Klein,” Cher replies.

Fashionable fact: Proof that the film is as a stylishly relevant as ever this fall season? There are over 53 kinds of plaid/tartan worn in the film.

Why we love it: Everyone loves a good making-of story, and this biopic of Gabrielle “Coco” Chanel traces her rise to indomitable style glory, from her days spent as a seamstress and nights singing cabaret in Moulin.

Signature look: Chanel, working on one of her
signature hats wearing the iconic Breton stripe (this scene takes place immediately after the designer spots sailors along the French coast, which inspired her creation of the nautical blue stripe).

Fashionable fact: When director Anne Fontaine showed Karl Lagerfeld pictures of French actress Audrey Tautou, he responded that she was the only “true Chanel.”

Why we love it: Collegiate with a distinctly mod execution, the style on set is authentically 1960s (Bardot-esque beehive hair, included) with a fine Ford tailoring.

Fashionable fact: Though this may seem counterintuitive for the critically adored American designer, Tom Ford did not
design the costumes used in the film; it was Arianne Phillips, who’s a costume designer and Madonna’s personal stylist.

Enter our ELLE Canada Fashion Film Competition for your chance to create your own sartorial icon—and have your winning entry screened at the Whistler Film Festival in December!