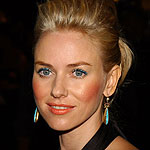 Naomi Watts came to Hollywood from Sydney, Australia, and gave herself five years to become a star. But instead of working in feature films, she toiled in commercials, modelling and small TV roles while her best friend, Nicole Kidman – who was married to Tom Cruise at the time – rose to the top of the Hollywood food chain as half of L.A.’s power couple. Watts was just about to turn around and head home when she got the part of Betty Elms/Diane Selwyn in David Lynch’s Mulholland Dr. At 33 years old (about 66 in Hollywood-actress years), her star was finally on the rise.

Today, like Kidman, Watts can choose the kind of films she wants to do. And, like Gwyneth Paltrow, she enjoys the kind of brand cachet that brings her lucrative cosmetics endorsement deals that allow her to take a break from filmmaking and focus on babymaking. (Watts and her partner, Liev Schreiber, are expecting their second child.)

Representing Angel – Thierry Mugler’s monster fragrance – at the age of 40 has been an unexpected but welcome career opportunity for Watts. Wearing a stunning black vintage Thierry Mugler dress with a peplum jacket that cleverly disguises her pregnancy and four-inch black stilettos, Watts slowly descends the tricky steps of the penthouse suite at the Hotel on Rivington on Manhattan’s Lower East Side. Despite her penchant for dark roles that focus on human despair, Watts’ golden blond hair – styled à la Veronica Lake – and delicate features give her an aura of vulnerability. Or, maybe her low-key persona today can be attributed to jet lag, having just flown in from Sydney via Los Angeles in time for the annual Costume Institute Gala at The Metropolitan Museum of Art. (She will wear the white “star” dress from the Mugler archives that she’s wearing on ELLE’s cover this month.)

Watts is here to meet the international fashion and beauty press and talk about her role as the new icon for Angel. The commercial, directed by Bill Condon, shows a curvy Watts as an ethereal being in a Muglerian universe of blue desert sky adorned with thousands of twinkling bottles of Angel perfume. “It was amazing to wear that dress [a sparkling blue-lace confection],” recalls Watts, “but Mugler designs for women with an hour-glass figure. Mine isn’t quite so hourglass – it’s pretty straight – so I had to wear a corset. People were literally having to rope me in for 12 hours a day!”

Watts says she received good advice from Kidman about the need to be selective with endorsement deals. The Angel collaboration is only the second one she has agreed to do – after an ad campaign for David Yurman jewellery.

“I met with Thierry [Mugler] in London to discuss the project,” she says. “In the past, I’ve been approached to do other campaigns, but I’ve admired Thierry’s work over the years, so this offer was a no-brainer. And Thierry himself is larger than life. He had a very clear vision of what he wanted: a woman who is angelic and sexy. Everyone likes to be thought of as angelic – especially in the eyes of men – but you shouldn’t be afraid of your strengths either. This perfume is soft and gentle at first, but it really stays on you. Listen, I’m turning 40 this year, so after seeing my face on the poster, I feel quite chuffed, really.”

Image courtesy of Jean-Paul Aussenard/WireImage.comThough Watts is no stranger to exposing her deepest vulnerabilities on film, shooting the Angel commercial elicited a surprising bout of stage fright. “As an actor, I much prefer to hide inside a character,” explains Watts. “For the commercial and still photography for Angel, I worried whether I would look the way they wanted me to look. After all, it is a beauty endorsement.”

Turns out, she had nothing to worry about. “Mugler has always admired Watts,” says Joel Palix, president of Thierry Mugler Parfums Worldwide. “She has managed her career with elements of surprise in the roles she has chosen. We wanted someone who was discreet, smart and articulate and could capture the paradox of this fragrance: being fragile yet strong, accessible yet glamorous at the same time.”

A true chameleon, Watts can hold her own on the red carpet yet become nearly invisible on the street, leaving her prey to only the most eagle-eyed paparazzi. “You have to work at protecting that side of your life,” she says. “It’s not always easy. You don’t want to remain a hostage in your own home.” Watts adds that she’s also careful to separate from her characters when it’s time to go home, although she admits that two films – 21 Grams and Funny Games – were hard for her to shake. “I always give myself 100 percent to the character,” she says. “I like to embrace my femininity in the role, and I think this is important in a world that’s so cold and cynical – especially in the movie industry.”

For years, the strongly career-driven Watts strove to find a balance between work, travel and a satisfying personal life. “I remember when I was acting in King Kong, on an island far from anything and everything,” she recalls. “I was like a castaway, holding on to my role for dear life. My life was all about packing and unpacking in those days.” A chance meeting with Schreiber at a New York event changed everything.

“I found myself at a place in my life where I had given up on the idea of becoming a mother,” she says. “Then I met Liev, and at the end of evening, I felt this pang of sadness because I thought, ‘I’m never going to see him again.’ I gave him my number, and he called me. I’ve often felt lonely, when I was a model and then an actress. Now I know it will never happen again. I feel so rich inside – so blessed.”

Today, Watts divides her time between homes in Sydney, L.A. and New York. “I need streets, stores and the hustle and bustle of people on sidewalks because I have a tendency to isolate myself,” says Watts. While the paparazzi manage to catch her on regular shopping jaunts in the SoHo neighbourhood in Manhattan where she lives, Watts says she isn’t a slave to trends or styles. “I’ve never been a fashion addict, and I usually don’t fall madly in love with specific clothes or jewels,” she says. “I’m still the rock ‘n’ roll girl I used to be – in jeans and a T-shirt.”

In addition to her second child, Watts has two films on the way: The International and a remake of Alfred Hitchcock’s The Birds. She says she dreams of one day working with female directors such as Sarah Polley, Jane Campion and Gillian Armstrong, but in her immediate future she plans to take time off to focus on her family. “Being a mother will be my conscious priority for a long time, although deep inside me the passion for acting is intact,” she says. “I only have one rule: Know what you want and why you want it. I believe this leads to the peace of mind and harmony that we’re all looking for.”