5 things we learned about The Danish Girl star Alicia Vikander

Get to know the Swedish actress who's about to have a major 2016. 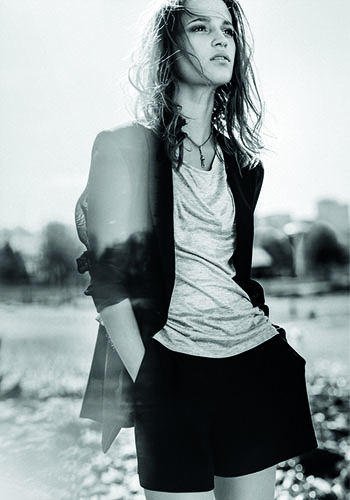 After a few years of slow burn, star-on-the-rise sizzling, 26 year-old Alicia Vikander is set to have her breakout moment in the Guy Ritchie directed re-make of the classic spy thriller The Man from U.N.C.L.E, out August 14. The Swedish actress plays Gaby Teller, the daughter of a scientist who is the only lead two agents have in their bid to stop international criminals from unleashing nuclear disaster on the world. (How very Cold War chic.) “I love that my character is a strong woman, which you don’t often see in these big franchise films” said Vikander over the phone from Nicaragua, where she was on her first holiday in years. “She pushes the narrative forward, and she’s bad-ass!”. Here are five more things that we learned Vikander loves:

Getting zen
I love doing yoga and pilates. I used to meditate a lot, and I’m trying to get back into it. Sometimes if I’m really stressed or if I get anxious –my mind creates thoughts that are bigger than what they are, and meditation brings things back to zero.

Spotify
I’m such a product of the Spotify age—I love all these songs but I don’t know what any of them are called. I’m currently listening to a playlist called “Maschou 2015”, which is named after a restaurant in the old town of Cannes. During the festival, I was there with about 15 people and we just ended up staying there dancing all night – even the chefs joined in! This is the music that played that night.

Playing games
I love hosting dinner parties! A friend and I threw our 25th birthday party together, and we ended up having about 60 people. Since many of them didn’t know each other, we gave each man a card with a woman’s name on it, and by the time we sat down to dinner, he had to have introduced himself to her. I’d love to host a Murder Mystery dinner party. I have a friend who has a country house in Norfolk that would be perfect!

Naples, Italy
We shot there for The Man from U.N.C.L.E., and the food was amazing! Naples has a certain vibe to it that is just incredible. It has a lot of history, and the people there were so nice to us.

Being a travel agent
Ever since I bought my first Ryan Air ticket at 16, I’ve loved researching and planning trips. My friends use me as their personal holiday planner. If a friend gives me that opportunity I normally call them back with a full itinerary of things to do!

Kacey Musgraves: “I didn’t set out to push boundaries”