Jully Black brings a confident, soulful sound to her new CD with the help of the Black Eyed Peas drummer Keith Harris. 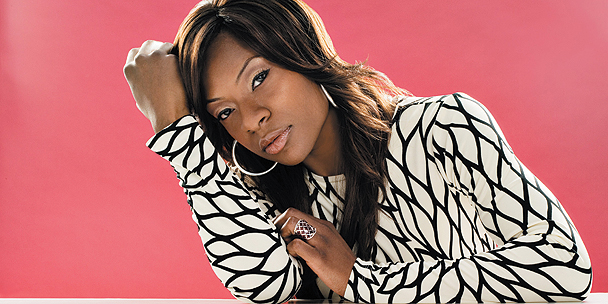 Jully Black is a force to be reckoned with. On CDs, TV, radio and the stage, the Toronto R&B singer’s energy, voice and personality all seem larger than life. And yet this is a woman who waited years on the sidelines for her time in the spotlight while label deals — and labels — came and went. But two things have changed in the past few years: the music industry and Black herself. The explosion of online music delivery has opened up opportunities for artists to reach consumers without major label or radio support, and Black has learned how to
get herself out there.

In 2005, her confident, funky, long-awaited debut, This Is Me, earned her the opening spot on the Black Eyed Peas’ Canadian tour. This, in turn, led to a creative collaboration with BEP drummer Keith Harris, who produced her even more confident new album, Revival.

Black and Harris went for a retro vibe on Revival‘s irresistible first single, a vintage 1951-style cover of Etta James’ “Seven Day Fool.” “We really wanted to channel that sound,” she says. “I spent a lot of time in Detroit last summer; I went to the Motown Historical Museum and studied a lot of old music.”

That experience set the stage for a new way of recording for Revival. “For This Is Me, I might have sat there while they made the beats, but this has live drums, live horns, live strings, live everything,” she says. “And even though we’re using technology, we have to be able to perform it live. You only get one chance onstage.”

Review: Revival
Jully Black bursts out of the gate with infectious enthusiasm on Revival (Universal) by demanding “DJ Play My Song,” palpably anxious to show off her powerful voice and tell the stories she kept inside for so many years. Black Eyed Peas drummer Keith Harris stokes the fire with an appropriately high-energy production, but it’s Black’s urgent, passionate vocals — whether on the smashing Etta James cover “Seven Day Fool” or on a series of funky originals — that ignite it all.