Caitlin Cronenberg and Jessica Ennis on the Art of Heartbreak 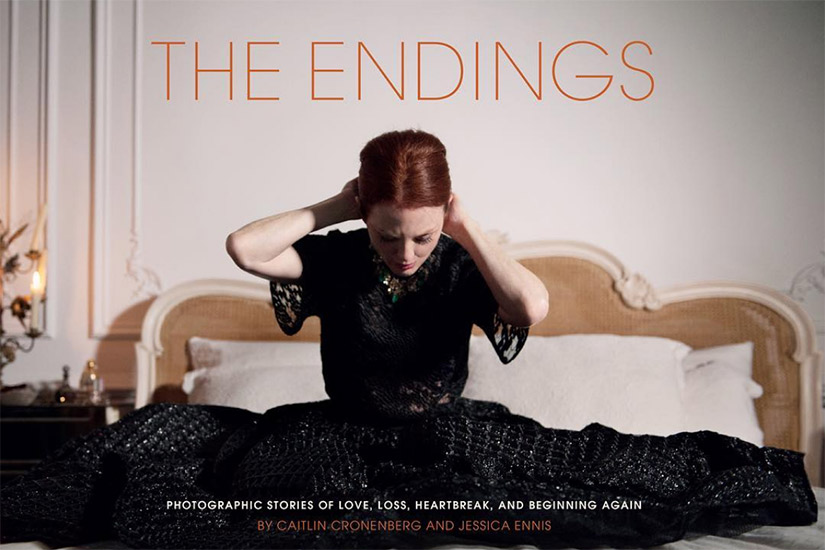 We tend to deal with breakups with a McNugget combo (the nine-piece, obvi) and a Friends marathon. Photog Caitlin Cronenberg and art director Jessica Ennis found a more productive—and pretty—approach: They directed 28 celebs (including Keira Knightley, Tessa Thompson and Julianne Moore) in breakup tableaux, some even inspired by their own lives for The Endings: Photographic Stories of Love, Loss, Heartbreak, and Beginning Again, out September 4.

When we meet up with the duo in downtown Toronto, their passion for the project is immediately evident, their banter and rapport extending our convo to 45 minutes. “Anytime I was in New York, I would stay at [Jessica’s] place,” Cronenberg, who is an award-winning photographer living in Toronto, recalls of her decade-long friendship with Ennis, who was based in New York but now lives in Toronto as well. “We would talk for hours everyday, it was like slumber parties—and you don’t always get to have slumber parties with your adult friends. That was sort of how the idea for The Endings was born.”

From 2011 up until last summer, Cronenberg and Ennis—who has produced sets for MTV and HBO, among others—conceived of, shot and edited their collection of raw and powerful vignettes, taking thousands upon thousands of photos. Now, with the book finally ready for the world to see, we sat down with the BFFs to chat about forming their friendship, working with women subjects and worries they might have been jinxed.

Today we shot the 28th and final story for The Endings. A project that started in 2011. We still have a long way to go before you see it all, but I can say we went out on a real high. Love you @jessicamennis my partner in crime, and @marissaadele and everyone else who has been part of this amazing ride… @theendingsbook #thisistheendings #photoshoot #setlife #wolfyworks #charleswolfgang #wolfy #lastshoot #sixyearslater #comingsoon

Where did you get ideas for each vignette? Were they all based on your late-night chats?

JE: For the most part, or stories people told us.

CC: A lot of them were ours, or friends of ours.

JE: With Julianne [Moore], for example, we sent her a few ideas and she was like, “I’ve done this.” Just her range.

JE: I think peoples’ were probably a bit tied to their lives.

CC: Some of them, yeah. A couple of people actually broke up with their boyfriends after our shoot.

JE: There was a point where we were worried it was jinxed. [Laughs]

With 28 subjects, the book is such a massive project. How did you approach it?

CC: Christine Horne [Hyena Road, Lost Girl] was the first person we shot, and that was also the first shoot where we figured out the style of shooting. What we realized is that it made more sense for us to have just us in the room with our subject and everyone else out of sight. So not like your standard shoot. We were directing her as a team, guiding her to different parts in the room. It was really improvisational and made it feel more like a film, more real.

JE: And we never changed our process. [Laughs] We were just two girls with a camera in a hangout situation.

So it was just women working with women, hanging out on set. What was that process and experience like?

CC: The whole process is like, they come in, we chat, they get their makeup done. We’re hanging out with them. If it’s people we don’t know, we try to build a bit of a connection in the lead up, because once the shoot starts, we’re in there guiding them. But we also step back and really let them experience things, so at that point, we hope they already have a level of trust with us.

JE: Unintentionally at some points, we also had an all-woman crew. I don’t know if it was deliberate or just sort of happened.

CC: It’s all relationship bonding. We really feel connected to everyone that we shot. Even if we haven’t really seen them since. It felt very supportive. Women capture sexiness in women in a different and more empowering way than men do because we appreciate and love naked women. I’ll say it. It’s like a piece of art. So when we have nudity in the book, we’re look at these women like this is a powerful beautiful body. Sexiness comes from the power.

JE: It’s never gratuitous. We tie it into the stories. We also really tried to capture flawed female characters, too. And that hasn’t really been popular for a long time.

You even dedicated the book to “women with wild hearts and a flair for the dramatic.” Why did you decided to do that?

JE: I think I may have just said that we should do a dedication to the women who are buying this book.

CC: Not to say that men shouldn’t buy this book, too, but obviously the characters are all kinds of women. We really wanted to touch on the fact that it’s okay to be dramatic, it’s okay to be wild, it’s okay to not really know what you’re doing in life and have emotions and feel things powerfully. We wanted every person to feel included in that, from the most timid, to the most wild and every single thing in between.

I know it’s like picking between your kids, but do you have a favourite tableau in the book?

CC: We were talking about this last night, and I was thinking that the way we look through the stories, I can’t look at them without thinking where we were in our lives at the time. Like, here I was pregnant, here were are inn L.A. and you were pregnant. It’s just a history of our lives for the last seven years and it’s really powerful that way. But in terms of visuals, I really love Noomi [Rapace]. I mean, I was pregnant at the one, but I remember crying behind the lens, weeping because her power was filling the room.

JE: I think mine is Eleanor [Tomlinson]. Just visually, I loved the contrast of her against the backdrop and she really captured it. The story was this certain amount of shame in this young girl, maybe having made mistakes and needing to return home to her parents she hadn’t spoken to. You look at those photos and really feel that. I identify with that story to some extent. And the one with Alison [Pill] because I was pregnant and quite literally looking at it from this personal kind of way.