All about the opera season's most insanely decadent costumes

An interview with the mind behind the designs, Cait O'Connor. 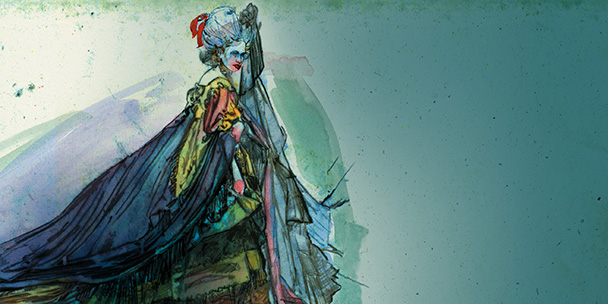 There are many reasons to go to the Canadian Opera Company’s new production of La Traviata (an event where people-watching with glorified binoculars is condoned? #yesplease). First, it’s a tragic tale (the title translates to “The Fallen Woman”) about a courtesan with a fatal disease told through Verdi’s wonderful melodies. Second, it features costumes by Cait O’Connor, a rock star of the stage style world whose previous credits include Cirque du Soleil. We chatted with the 34-year-old New York City native about what went into creating a show that’s all about “exaggerated decadence.”

What is the overall vibe of the production’s costumes?
“The heroine, Violetta, lives in a world of extreme fantasy. The opera opens on a mad mock court, where ladies are pulling together a vision of Versailles. This celebration is powdered over and playful. It’s sugary ’til your teeth ache. The second gala invites the underside of the illusion: These clothes are dark and dangerous; fantasy has turned to hallucination. All of the colours are pulled from the iridescent spectrum found in crow’s feathers and the acidic rainbow of an oil slick.”

What are some of your favourite details on the costumes?
“Violetta’s first look is ethereal and light, evoking the celestial imagery of stars and nightingales. I love the lustre of the silks we used, painted to suggest the dark undercurrent of the world Violetta is trapped in. Violetta’s Act III gown is an entirely different interpretation of seduction. For the 12 layers—each one a different fabric—we used rich velvets and yards of jewelled trim to create an elegant-yet-dangerous look.”

Is there a “wearable” look from the show?
“I think it’s all wearable! What I love about the costumes in La Traviata is they celebrate fantasy, desire and fragility. But I think the perfect pair of golden wings is the ultimate accessory.”

La Traviata opens in Toronto on October 8 and runs until November 6 (coc.ca).

12 books you need to read this fall