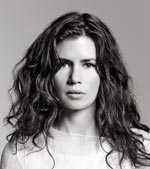 In a lavishly furnished room, surrounded by historical paintings of the British navy defeating the French, Gucci Westman settles into a plush antique sofa, ready to unveil her latest makeup collection for Lancôme. The launch of Rose Mystère, which was held at Brocket Hall — a posh estate just north of London — was the perfect venue to set the mood for her English-countryside-inspired line.

“I’m very influenced by landscape and atmosphere,” explains Westman, who has been Lancôme’s international artistic director for almost two years. “Even driving up to this estate affects you. It’s so dramatic.” The New York-based celebrity makeup artist says she chose the 255-year-old manor because the setting reminded her of the film Gosford Park. “I loved the colour harmonies — not from the makeup, but from the sets, the furniture and the fashions. They were so beautiful.” Sojourns at Blakes, one of London’s more theatrical boutique hotels, as well as weekends in the Oscar Wilde suite at L’Hôtel in Paris also influenced Westman’s decision to focus on the romantic and moody shades of violet, rose and grey.She adds that it was important that the collection have a sense of sensuality and romanticism.

Westman’s muse for Rose Mystère was a lady that the Irish poet and dramatist Oscar Wilde described in his book The Picture of Dorian Gray: “She was a woman with violet eyes and a serious expression, with thick brown hair and marvelous curls…” Picking up on Wilde’s description, Westman said that her muse is a woman who is romantic and intelligent. “She’s not prim and she’s not wild boho. She’s sophisticated, mysterious and she projects an inner confidence.”

In the advertising campaign, Drew Barrymore brings this woman to life. Pointing to a poster-size image of the ad, Westman says that she admires Barrymore’s ability to project vulnerability yet sensuality. “Her eyes look dark and mysterious, and her lips look like she has just had some wine — it’s very sensual.” If, as Wilde believed, the purpose of art — and, one could argue, makeup — is to embody beauty and provide sensuous pleasure, Westman’s latest collection is an aesthete’s dream.