Summer beauty: In defence of the bikini wax

Going au naturel is as lazy as it gets—and on trend too. But is the bikini wax really worth it? 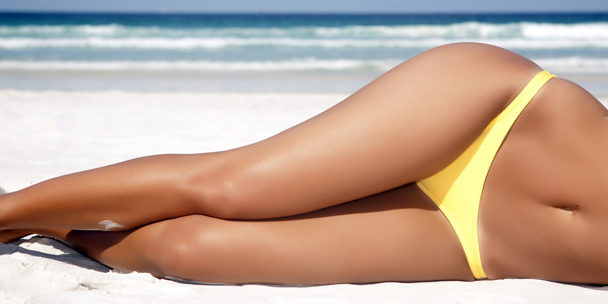 When it comes to personal grooming, I’ve got a pretty laissez-faire attitude. I’ll do the bare minimum—take one look at my
inch-long roots and you’ll know what I’m talking about. But taking care of my hair
down there has always been a priority—partly because it makes me feel cleaner and partly because I think it’s polite practice from an, er, intimate standpoint. (Though it bears mentioning that, just like with the hair on my head, my boyfriend never notices when I’ve had it cut.) So, you’d think that my inherently low-maintenance attitude would make me an ideal advocate for the increasingly popular trend of the full-grown bush, right? Wrong.

MUST-READ: The 7 TOP SPAS in the world to visit

Oddly enough, I feel a little nostalgic when I think about hair removal. I’ll never forget my first time. Probably because when it comes to firsts, an unsolicited Brazilian bikini wax is a difficult thing to forget. In fact, if I had to make a list of core-shattering experiences that shaped the future of my womanhood, I’d put “surprise Brazilian” right after “first orgasm” and “figuring out the tampon.”

When I moved to New York at the turn of the century, the Brazilian bikini wax was as
de rigueur as low-rise jeans. Gwyneth Paltrow was extolling the virtues of the J Sisters (the purveyors of the Brazilian bikini wax in America) to anyone who’d listen, and entire episodes of
Sex and the City were dedicated to it. What I didn’t know, however, was that taking it all off had become standard practice in Manhattan salons. When I visited a local
nail spa for a routine bikini wax, what resulted was a spontaneous Brazilian at the hands of a brutally expedient aesthetician. I left shell-shocked, wondering if I had crossed some imaginary line of propriety that good girls with master’s degrees and pearl earrings weren’t meant to blur.

GALLERY: 10 SELF-TANNERS for a summer glow

Once home, I gingerly removed my pants to examine the results. I hadn’t seen that much of myself in nearly two decades, and the effect was oddly mesmerizing. I silently wore my bare area like a badge of honour. It turned everything society and physiology held to be true on its head: The bare mons of my preteen youth was the ultimate indicator of my womanhood. I had never felt more like a woman: clean, smooth, bold and…proud.

What are Hollywood’s celebrities saying about the bikini wax? Find out on the next page…

Last spring, when the full-bush trend began to sprout in popular culture, I found it disconcerting. Was I really expected to casually sport an unruly thicket of hair, like Gaby Hoffmann did on
Girls? The winter issue of
Candy featured a hirsute Lady Gaga on the cover, and in January, American Apparel displayed mannequins in merkins in its downtown Manhattan storefront—proving that this trend was, indeed, moving into the mainstream. Long-time Brazilian supporters are starting to waver too.
Paltrow copped to “working a ’70s vibe” on
The Ellen DeGeneres Show last spring, and Cameron Diaz, who told U.K. television host Graham Norton in 2012 that she once forcefully pinned down a friend and trimmed her wild pubic hair (allegedly it was Paltrow), published
The Body Book in January of this year admonishing the practice. In a chapter entitled “In Praise of Pubes,” she celebrates what she calls “pretty little draping” and lashes out at laser hair removal: “I think permanent laser hair removal sounds like a crazy idea. Forever? I know you may think you’ll be wearing the same style of shoes forever and the same style of jeans forever, but you won’t.”

Did any one particular man shape my tendencies for how I wear my pubic hair? Not directly, but I’m sure the collective push for less bush influenced me. In my pre-Brazilian days, I watched a scene in a spoof film of a guy taking a weed whacker to his girlfriend’s untamed pubic hair. I hoped that the boyfriend watching with me didn’t think it related to him. I’m not saying that
Scary Movie 2 forced me to rethink my pubes, but I’m not denying it either.

Like an LBD or a classic bob, some things are less about fashion and more about everlasting style. Jessica Frampton and Florence Gaven-Rossavik, the owners of Fuzz Wax Bar, which has two locations in Toronto, say that the Brazilian is still their most popular service, but demand for modification, like leaving a “landing strip” or a triangle of hair, is growing. “Even when they’re not taking it all off, clients are still coming in for routine cleanups along the sides, and trims,” says Frampton. In New York salons, the “full-bush Brazilian” is the new thing. It consists of removing the hair from the backside and labia while letting it grow free on top, in a reverse-mullet style. (Though one could argue that when it comes to that body region, the business and the party are interchangeable.) Whatever you want to call it, the fact remains that “[women are] definitely not shifting to a completely
au naturel look,” adds Frampton.

And neither am I. From time to time, I still go in for the full bushwhacking (!!) because I want to and I like it, and, as a friend once pointed out, it makes me feel like my skinny jeans fit better. I may let the roots on my head peek through, but not my roots down there. It’s something that I will continue to do, just for me and my mons.