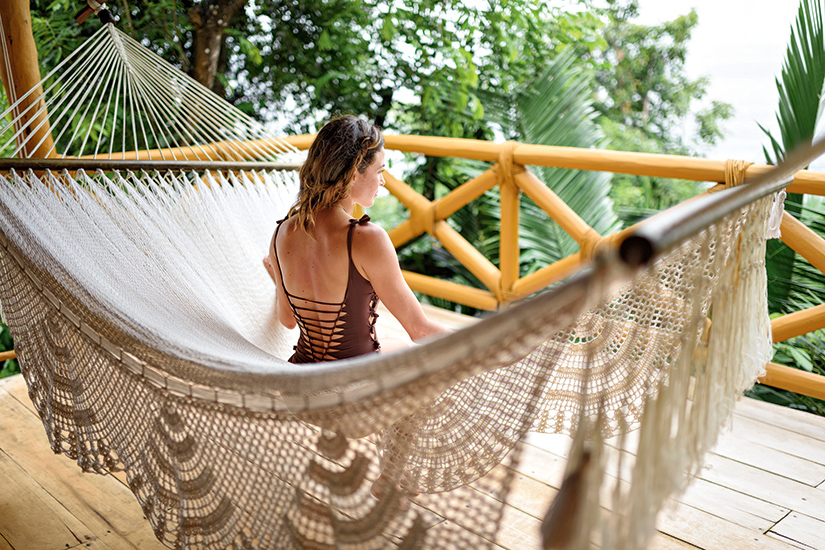 On a 2016 episode of The Mindy Project, beloved heroine plans a girls weekend in Miami, hoping that a few days of bottomless mojitos and random hookups will help her to forget a recent romantic betrayal. As fun as this sounds, there’s something a bit dated about an indulgent vacay spent pigging out on sugary cocktails and soggy nachos. In today’s wellness-fixated culture, it’s more than a little tempting to think that Mindy, a busy professional and a single mom, might benefit more from some mindful meditation and a colonic. Goodbye, no-holds-barred, let-it-all-hang-out holiday; hello, concentrated time-out from the stressful toxicity of everyday life. It’s an emerging trend: holidays that offer time to heal and recharge—a distraction-free chance to slow down, take care of ourselves and leave life’s never-ending emails and overscheduled obligations behind.

Why the uptick in interest in these kinds of breaks? A vacation is meant to be an escape, and today what we’re escaping is a day-to-day life in which work has spilled out of the nine-to-five and there are few boundaries left between the professional and the personal. In her new book, The Weekend Effect, Katrina Onstad examines the deterioration of what used to be our weekly mini-vacation: our two days out of seven off. “We’re in this creative class mode of working where we’re trading in ideas instead of widgets, so we’re always on high alert and we don’t have an off button,” she says, pointing to the rise of anxiety, substance abuse and mental-health issues associated with insecure work. Add to that the urge to document the moments when we’re #livingourbestlives on social media and we’re “turning leisure into labour.”

As a freelance writer, I’m the poster child for the new gig economy. I’m available at a moment’s notice for fear of turning down assignments because you never know when they’ll dry up. Yes, I may be able to duck out for a manicure in the middle of the afternoon, but, like most of my colleagues, I’m often tapping away on my laptop well into the evenings and always on weekends. A detox holiday may not solve my problems of busyness, I thought, but it could jump-start a new attitude toward self-care, one that involves carving out space for dedicated leisure time. Scheduled self-improvement and detox as a destination vacation? I’ll sign up for that.

And so, in March, I travelled to the Xinalani Retreat, near Puerto Vallarta, Mexico, for a four-day wellness binge: the Solo Yogi Retreat, which is designed to whisk me away from life’s “stresses and stagnation” while connecting me with about 50 other guests—the kind of people I imagined worship at the altar of Goop. I decided to deep dive into this life by participating in an hour-long ritual in a Temazcal sweat lodge: As I sweated it out in the dark hut, a shirtless shaman had me snorting liquid tobacco out of my hand and chanting to the universe’s abuelita (Spanish for grandma). As far as self-care goes, it was a far cry from my usual Sunday-evening face mask—and I absolutely loved it.

I was literally surrounded by nature in my open-air casita with only three walls; I spent the mornings doing sun salutations on a mountaintop and the afternoons hiking through the jungle and swimming in the ocean. Every evening, along with a gluten-free dinner of sautéed veggies and fish in green-tomato sauce or roasted-bell-pepper soup and cumindressed salad with avocado and chocolate mousse for dessert, I sipped on a single glass of local red wine before climbing into bed at 10 o’clock. (At home, I’m often soaking up the screen time much later than I care to admit.) In Xinalani’s restorative paradise, I felt grounded, despite leaving my phone set on airplane mode. As I wandered the pretty dirt paths of the resort, my step was lighter, my mind was quieter and even my face felt at rest, making me forget all about my recent decision to try Botox. My body no longer had any use for toxins, so why should my forehead?

Throughout my Mexican cleanse, I reflected on some of the physical, mental and emotional ways I’d been taxing my body since moving to Toronto from Naughton, Ont., 15 years ago. I realized that investing in my health instead of my shoe closet—in effect, taking a break to re-evaluate my lifestyle—was a desire that had been nagging at me for years. And I wasn’t alone. According to the Global Wellness Institute, in 2015, world travellers took 691 million wellness trips, making up a $563-billion global wellness tourism market. This self-care approach to travel extends to drinking habits. It seems that young adults are passing on boozy opportunities; a 2014 study out of the United Kingdom found that millennials are drinking less alcohol than previous generations. When your everyday life is constantly interrupted by pollution of all sorts—whether it’s from what we eat, group texts, how we work or a toxic relationship—it makes sense that we’ve come to prize time spent in a simplified, healthy environment.

It’s easy to maintain a healthy flow when you’re submerged in a climate where all of the elements are controlled, but returning to my home—which doubles as my office—proved to be a challenge. I didn’t want to slip into old habits, so I was drawn to the idea of detoxing. Instead of the usual post-vacay calorie cutbacks (I had eaten as good as Goop in Mexico, after all), I tried the Renew Life First Cleanse, a 15-day regimen that involves taking herbal supplements that purport to “stimulate the cleansing and detoxification process through the body’s seven channels of elimination: the liver, lungs, colon, kidneys, blood, skin and lymphatic system.” The cleanse is labelled “gentle” because you can slide this program into your routine without having to cut out gluten or banish your fave fromage entirely. The pills, which you take twice a day, contain milk thistle, dandelion and turmeric to stimulate the liver’s production of bile and promote gut health and are meant to rid the organs of toxins, free radicals and pollutants. I noticed no negative side effects—in fact, I woke up every morning feeling light and mentally refreshed.

With the impetus to eat better to maximize the supplements’ benefits, I drank less alcohol; I rediscovered a trim tummy, with less bloating than usual, and a whole lot more energy. “Energy is definitely something people will say goes up when they do a cleanse,” says Sara Celik, a board-certified naturopathic doctor and the national spokesperson for Renew Life. “If somebody has toxicity or a sluggish gut, chances are they’re not absorbing vitamins and nutrients and they feel lousy and tired.” I can attest to that: I felt invigorated during the cleanse. But just like with any health kick, not everyone is on board with the cleansing craze. Registered dietitian Jaclyn Pritchard of Cleveland Clinic Canada says it wasn’t worth my time. “There is no evidence to support that cleansing improves bowel health, detoxifies the body or helps to achieve lasting weight loss,” she says. “Your intestines, lungs, liver and kidneys very effectively remove waste from your body every day.” A gut vacation, she says, is a worthless endeavour. “There is no need to give your digestive system a rest. Your intestines are well equipped, and the body eliminates best when given enough water and fibre from whole grains, fruit and vegetables.”

In a world far away from Xinalani, I’ve been re-examining my diet, which could certainly benefit from more balanced meals. I’ve taken a good, hard look at the external factors affecting my well-being—from my relationships to all of the vapid screen time—and made a silent pledge to re-evaluate the overscheduled nature of my life. Maybe if I clean up my act at home with regularly scheduled cleanses and a more mindful approach to life, I can go back to my Mindystyle vacations of cocktails and croissants—in moderation, of course.

1. After being plagued by the Sunday Night Sads, journalist Katrina Onstad sought to explore the culture of overworking in her latest book, The Weekend Effect ($14), at chapters.indigo.ca, which examines the benefits of scaling back on incessant work demands (from overbooked iCals to endless domestic duties) and returning to a tunedout, recharged weekend.

2. Renew Life First Cleanse contains turmeric, 2017’s buzziest antiinflammatory herb, which is used to treat abdominal pain, bloating and loss of appetite. It is free of laxative herbs, such as senna and cascara. The American-based brand claims you won’t be plagued by the typical flulike symptoms more aggressive cleanses can induce.

3. Moment Screen Time Tracker is an app that tracks the hours you spend on your smartphone and allows you to set limits so you don’t overindulge in swiping/creeping. It gives not-so-subtle reminders (often in angry red font) such as “Get back to your life” and can even be programmed to actually turn off your phone—if you can fathom the horror.